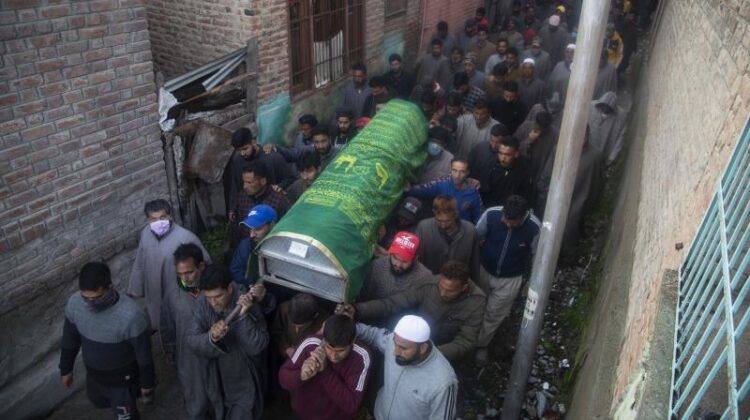 Kashmiri villagers carry the coffin of elected official Riyaz Ahmad in Sopore, 55 kilometers (34 miles) north of Srinagar, Indian controlled Kashmir, Monday, March. 29, 2021. Gunmen killed an elected official of India’s ruling party and a policeman in disputed Kashmir on Monday, police said. Police blamed anti-India militants for the attack. None of the rebel groups that have been fighting against Indian rule since 1989 immediately claimed responsibility for the attack. (AP)

SRINAGAR:  A municipal councilor and a police guard were killed and another councilor was injured in a militant attack in Jammu and Kashmir’s north-western town of Sopore, 48-km from here, on Monday.

A report said that the slain councilor represented BJP in the Sopore municipality and that he and others had arrived at its office for a scheduled meeting minutes before the attack took place.

The police said that gunmen targetted the Sopore municipal office with automatic weapons on Monday afternoon, injuring three persons. They were rushed to a nearby hospital where councilor Reyaz Ahmad Peer and Special Police Officer (SPO) Shafqat Nazir Khan succumbed to their injuries and another councilor Shamas Din Peer was battling for life. The injured councilor has since been shifted to a Srinagar hospital for specialized treatment, the hospital sources said.