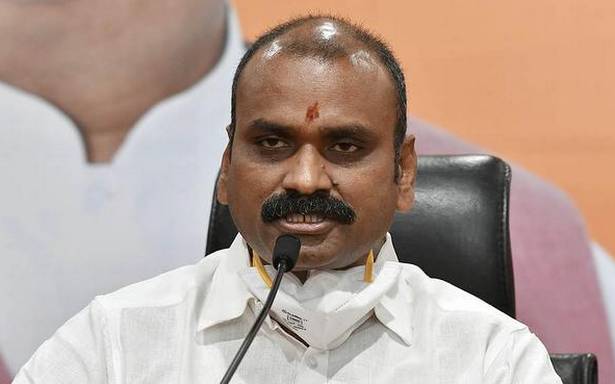 BJP State unit president says there is no difference of opinion; national leadership will only endorse the choice of AIADMK

Reiterating his statement that his party’s national leadership will make a formal announcement on Chief Minister candidate in Tamil Nadu, BJP State president L.Murugan said on Sunday that he had only meant that the AIADMK’s choice of candidate will be endorsed.

There was no difference of opinion between the two parties, Mr. Murugan said, referring to AIADMK’s recognition of NDA’s strength in Tamil Nadu in the presence of the former BJP national president and the Union Home Minister, Amit Shah recently.

In fact, the difference of opinion in the United Progressive Alliance on many issues would cause a break-up in their alliance, he said.

The DMK and corruption are “inseparable” and it had failed in its efforts to project the BJP government at the Centre as anti-farmer, he said. Moreover, the DMK, in its election manifesto in 2016 Assembly elections, had promised measures to enable farmers sell their produce nationally and internationally without any middlemen, at the market-determined prices, he added.

Meanwhile, BJP’s State vice-president K. Annamalai said Mr. Murugan’s remarks on the choice of Chief Ministerial candidate has not caused any confusion in the alliance.

Speaking to reporters in Coimbatore on Sunday, after a meeting organised by the Scheduled Tribe wing of the BJP Coimbatore urban district unit, he said the AIADMK continued to be part of the NDA.

The BJP parliamentary board, the party’s decision-making body, is yet to make any official announcement on the State assembly elections. BJP national president J.P. Nadda is scheduled to visit Tamil Nadu on December 30 and 31 for a review meeting and his arrival will clear many doubts, he said.

In November, when Chief Minister Edappadi K. Palaniswami and Deputy Chief Minister O. Panneerselvam said in the presence of Union Home Minister Amit Shah that the AIADMK-BJP alliance would continue, Mr. Shah did not speak about the alliance because he was no longer the the BJP national president, he said.

The resolutions passed at the meeting urged the State government to ensure hassle-free issuing of community certificates to the STs. It also sought 5% reservation for them in government jobs besides allocating five Assembly constituencies in areas with large population of tribal people.