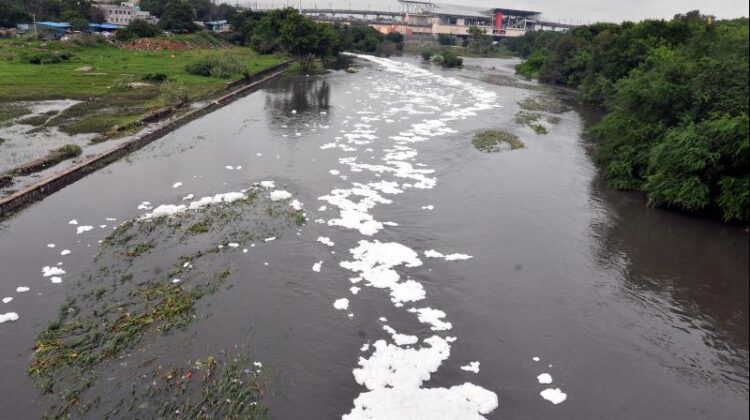 Hyderabad: Water of Musi river is unfit even for irrigation, said researchers from Osmania University’s Centre Of Exploration Geophysics who made a recent study of the water quality.

The researchers tested groundwater samples in the 60 km stretch of the river from Peerzadiguda on the city outskirts to Valigonda, where the Musi meets River Krishna, and found that till a depth of 40 metres the Dissolved Oxygen (DO) and Biochemical Oxygen Demand (BOD) were way beyond prescribed parameters, due to the very high levels of contamination.

Researchers have noticed that indiscriminate disposal of urban and industrial wastewater into open nalas (drains) or other water bodies has been common practice in the agglomerated metropolis of Hyderabad. This has a negative impact on the plants, animals and human life and also the agrarian produce, they stressed.

The elevated concentrations of COD and BOD have shown organic matter presence in Musi river, and can have disastrous effects on aquatic life and human health. High COD concentration was noticed in all the sites of the river selected for the study, and this was above the permissible limits set by WHO and BIS:19500, indicating pollution by degradable organic waste from various sources.

Groundwater samples were collected from the Hyderabad urban periphery (Peerzadiguda), the downstream areas of Musi up to 60 km (Valigonda) to ascertain the BOD and COD concentrations from pre-and post-monsoon seasons.

Researchers found that BOD in the study area varied from 60 to 197mg per litre (mg/l) before and after the monsoon in the southern part of the river. In the northern part, it was 27 to 162 mg/l.

In the post-monsoon period, the lowest BOD value of 28 mg/l was noticed at Edulabad junction on the northern side, and the highest value 190 mg/l at Jalukaluva village in the southern part with a mean value of 108.3 mg/l.

A higher concentration of COD was noticed, compared to BOD, in ground water samples along the Musi. The average COD content was 180 mg/l and 172 mg/l, and 185 mg/l and 171 mg/l respectively in the pre-and post-monsoon seasons in the northern and southern regions.

The mean COD concentration during the pre-monsoon term was 177.67 mg/l, with a low value of 56 mg/L at Poddutur village on the northern side of the river and the high value of 428 mg/l in Korremula village’s bore well water.

The low COD noticed during post-monsoon was 22 mg/l at Bacharam village and a high value of 430 mg/l was found at Korremula village with an average of recording of 166.9 mg/l. A high COD was noticed during the pre-monsoon period may be due to prolonged accumulation of seeped organic leachate into the aquifer.

Prof. G. Ramadass, retired professor of geophysics, Osmania University, who conducted the study said the COD and BOD were at abnormally high levels compared to the WHO’s permissible limits for drinking, irrigation and waste water.

He said that the BOD to COD ratio was supposed to be less than 0.3. In reality, it was very high and indicates a high level of pollution.

Prof. Ramdass said the BOD/COD ratio may be treated as an indicator in characterizing the intensity of pollution. The eventual aim should be the treatment of wastewater before it is used in agriculture downstream of Hyderabad. “The natural remediation efficiency of the river system may be
improved with the construction of bunds for waste stabilization along the river,” he added.