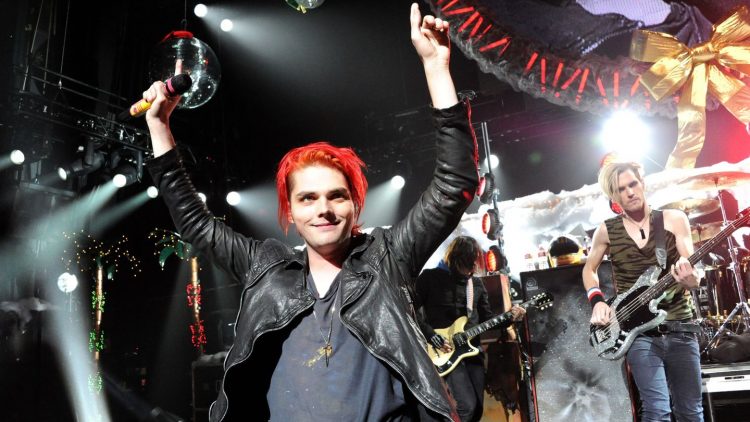 On December 20, 2019, beloved emo outfit My Chemical Romance made their grand, highly anticipated return at The Shrine in Los Angeles. After temporarily disbanding in 2013, Gerard Way, Mikey Way, Ray Toro, and Frank Iero played a reunion show that sold out in mere minutes and consisted of both fan favorites, such as “Helena” and “Teenagers,” and deep cuts, like “Our Lady of Sorrows” and “Give ‘Em Hell, Kid.” The fictitious Dr. Death Defying introduced the quartet via an audio intro, just as he opened their fourth and final record, 2010’s Danger Days: The True Lives of the Fabulous Killjoys.

Despite the fact that the Jonas Brothers spilled the beans on the MCR reunion, their official return in 2019 was an important one: The year also serves as the post-apocalyptic setting for Danger Days, a concept album that follows protagonists the Killjoys as they traverse the Californian deserts of Battery City to take out the evil Better Living Industries. Each band member has a Killjoy alter ego, with Gerard Way as Party Poison, Mikey as Kobra Kid, Toro as Jet-Star, and Iero as Fun Ghoul, all futuristic warriors wielding laser guns against the Draculoids, the company’s evil minions. Their whole adventure is narrated by Dr. Death Defying, a pirate-radio DJ who provides music and intel. Although an end-of-the-world sci-fi narrative felt alien in the actual 2019, it turns out MCR was just a year off, given 2020’s upending of society via a raging pandemic, ongoing racial-justice protests, a threatened peaceful transfer of government power, and more.

Given the record’s ambitious concept, it’s no surprise that Gerard Way eventually developed it into a full-fledged comic book series. But as he told The Village Voice, the comic idea actually came first. Gerard and Shaun Simon, who sold the band’s merch and co-wrote the six-part series, “had the idea for this comic that really was in a weird way semi-autobiographical, although had nothing to do with [the band], and [they] weren’t in it.” That much eventually changed; the band members perform as their respective Killjoy characters in the music videos for “Na Na Na” and “Sing.” Both see the band taking down Draculoids and driving a car adorned with the Killjoys logo, a spider with eight legs, cut through the middle with a lightning bolt, which also adorns the album cover. Danger Days was the catalyst that set off Way’s comics career — a fruitful second life that’s also seen him launch The Umbrella Academy, now a popular Netflix series. But in 2008, it wasn’t exactly clear what shape Way’s latest creative endeavor would take.

Following the massive commercial success of 2006’s The Black Parade — a theatrical concept in its own right — Way told NME, “I think [the next album] will definitely be more stripped down.” There was reason to believe his next project would discard the dramatics: MCR had begun abandoning the theatricality and pyrotechnics toward the end of The Black Parade’s tour.  You could say that they gave up the gothic outfits and eyeliner, but Danger Days still shows the quartet at a theatrical zenith. The sheer ambition of its plot line, characters, and music videos showed that My Chemical Romance still had plenty of bombast left. Simply put, this band is a lot. But it’s also what makes them so enduringly intriguing.

On The Black Parade, they popularized the marriage of horror-punk aesthetics and Broadway-esque histrionics, and it’s why “Welcome to the Black Parade” is one of the highest-charting emo songs ever written (it peaked at No. 9 on the Billboard Hot 100). They even worked with producer Rob Cavallo again for Danger Days, who produced not only The Black Parade, but also Green Day’s rock opera American Idiot and the soundtrack of the Broadway musical Rent’s film adaptation. However, My Chemical Romance changed both their music and aesthetic substantially with the release of Danger Days. As many emo fans know, when the ringleader changes their hair color, a seismic shift is likely to follow.

Danger Days is a monumental departure from the violent catharsis the band had come to be known for. This album drew from influences such as MC5’s 1969 live record Kick Out the Jams, The Beatles’ “Lucy in the Sky with Diamonds,” and David Bowie’s eighth LP Diamond Dogs. Consequently, Danger Days is more akin to psych-rock than, say, pop-punk. My Chemical Romance also imbued their sound with eclectic, pop-forward songwriting, particularly on songs like “Sing” and “Planetary (Go!).” The band even made their momentous Glee debut with the former. Although the songs are much poppier than what the band had typically written, they’re also more reminiscent of pure rock music in the vein of Smashing Pumpkins, one of the band’s clearest influences. “Destroya” mixes a Jimmy Chamberlin-esque drum pattern with a driving guitar hook. Closer “Vampire Money” is a thrash-rock take on a I-IV-V chord progression, and the call-and-response intro pays homage to Sweet’s “Ballroom Blitz.”

On a lyrical note, it could seem like Danger Days is complete fiction at first glance. But in a track-by-track breakdown with Billboard, Way mentions that some of these tracks are at least somewhat autobiographical. “Summertime,” specifically, is “one of the lyrically personal songs” and is simply Gerard “talking about [his] worldview,” strongly suggested to be about his wife, Lyn-Z. The chorus features the line, “You can run away with me anytime you want,” and it contains two phrases that the couple would write on each other before each of them performed. “Bulletproof Heart” is similarly emotionally vulnerable (“I got a bulletproof heart / You got a hollow-point smile”), as is “The Only Hope for Me Is You” (If there’s a place that I could be / Then I’d be another memory / Can I be the only hope for you? / Because you’re the only hope for me”). You could say that these songs follow the escapades of the evil-fighting, anti-corporate Killjoys, but these songs are as personal as the lyrics found on 2004 breakthrough Three Cheers for Sweet Revenge or The Black Parade.

Then there’s “The Kids from Yesterday,” the song that foreshadowed the group’s hiatus from its opening line: “Well, now, this could be the last of all the rides we take.” As if there wasn’t already a hint of unintentional finality to the apocalyptic Danger Days, “The Kids from Yesterday” was the final song the band wrote for the record. They didn’t exactly plan on it having the conclusiveness that it did. They were even reportedly working on their fifth album in 2012, but that didn’t stop the track from serving as a (short-term) goodbye letter. This song was even the final one in the main set at their reunion show.

Danger Days hasn’t gone on to occupy the same cultural throne as The Black Parade or Three Cheers for Sweet Revenge, but it’s still an integral part of the group’s history. It’s certainly not My Chemical Romance’s most popular album, but it’s a milestone in their oeuvre, providing fans with an odyssey-like storyline, wide-ranging musical influences, and a return — after nine years — to a world about to be plunged into a similar madness tackled by the album’s bold concept. “We’re gonna continue to punish you,” Way said to The Shrine’s audience after performing “House of Wolves.” The world didn’t want to be punished by a pandemic, but it’ll take the punishment of an MCR show any day.