Home SportsCricket My Workload Management And Training During IPL Will Be Keeping Tests In Mind: Bhuvneshwar Kumar

My Workload Management And Training During IPL Will Be Keeping Tests In Mind: Bhuvneshwar Kumar 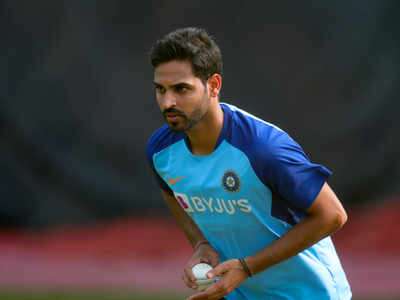 Bhuvneshwar Kumar, Indian pacer on Sunday said that he wants to play the longest format of the game, so his workload management in the upcoming Indian Premier League (IPL) would be done keeping this fact in mind.

India pacer Bhuvneshwar Kumar on Sunday said that he will have the upcoming five-Test series against England in mind when he trains during the Indian Premier League. Bhuvneshwar Kumar, who has had a lot of injury issues for the past two years and being out of the national team, was the team’s second-highest wicket-taker in the three-match ODI series with six scalps.

Bhuvneshwar Kumar: Red Ball Cricket Is In Radar And Will Prepare To Keep Tests In Mind

The pacer was ruled out of the Australian tour after sustaining a thigh muscle injury while playing for the SunRisers Hyderabad franchise in the IPL 2020. The 30-year-old pacer made his comeback with Uttar Pradesh in the Syed Mushtaq Ali Trophy. Bhuvneshwar Kumar has played the last Test against South Africa in 2018 while his last ODI and T20I came in 2019 before the England T20Is and ODIs where he picked 4 T20I scalps and 6 ODI scalps.

Asked if he is still thinking about making a comeback in Tests, Bhuvneshwar Kumar replied: “Of course, red-ball cricket is in my radar. I will prepare to keep the red ball in mind. Although what kind of team will be selected for Test matches is an entirely different scenario.”

“My workload management and training during IPL will be keeping the red ball in mind because I know there’s a lot of Tests ahead and my priority still is Test cricket. So from my end, I will do everything to get ready for the Test series,” the UP seamer said during the virtual conference after India beat England by seven runs to clinch the series 2-1.

His best Test figures of 6/82 were also recorded against England, albeit in pace-friendly conditions at Lord’s. The competition has stiffened for pacer Bhuvneshwar Kumar as backup pacers Mohammed Siraj, Shardul Thakur, and T Natarajan have stood up with impressive performances in Australia. The return of Ishant Sharma and fit again Umesh Yadav and Mohammed Shami will mean India have a strong pace attack to envy.

However, while he would prepare in earnest, Bhuvneshwar Kumar doesn’t want to make too many plans as they can always come a cropper due to various reasons.

“I have stopped making long-term plans as in the past when I have done that, things haven’t gone in my favour. Be it because of injury or form.”

“But yes workload management is something, I will be seriously monitoring along with team management. So yes, since I was unfit for a long time, I had to ensure that I put a lot of emphasis on being fit. We have a lot of cricket ahead along with England tour, so I will try and keep myself fit,” Bhuvneshwar said.

“Today, he performed really well,” Bhuvneshwar said about Shardul. “He had come in as the second change bowler when the ball doesn’t swing at all and there was a lot of batting remaining too. So it’s tough for any bowler to come in there and pick up wickets. If you ask me, he changed the entire match completely. What role generally spinners play, today we played one less spinner, he gave us the breakthrough and put us in a position where we could win from.

“He’s improved a lot as a bowler be it in his batting or bowling. That’s what a team needs, for a player to contribute with the bat or ball. He’s done that since the T20s and now he’s done it here. He’s contributed a lot. You can see a difference in his game; no difference, but improvement. And his confidence is right up there too. Just how he’s performed in the T20s or now.”

The 31-year old, who last played for India in November 2019 before England’s limited over matches was returning after two long injury gaps and immediately made his mark. A sports hernia meant he didn’t play any international cricket in 2020 before the COVID-19 break, and he only played four games in the 2020 edition of the IPL as his tryst with injuries extended further.  He picked 6 scalps in 3 ODIs averaging 22.5 and 4 scalps in 5 T20Is averaging 28.75.

Shardul Thakur, who was the highest wicket-taker in the T20I series with 8 scalps picked up 7 wickets in ODIs becoming the highest wicket-taker in ODIs too. Shardul Thakur and Bhuvneshwar Kumar shared seven wickets between them to help the hosts India beat England by seven runs in a thrilling third one-day international on Sunday and win the series 2-1.