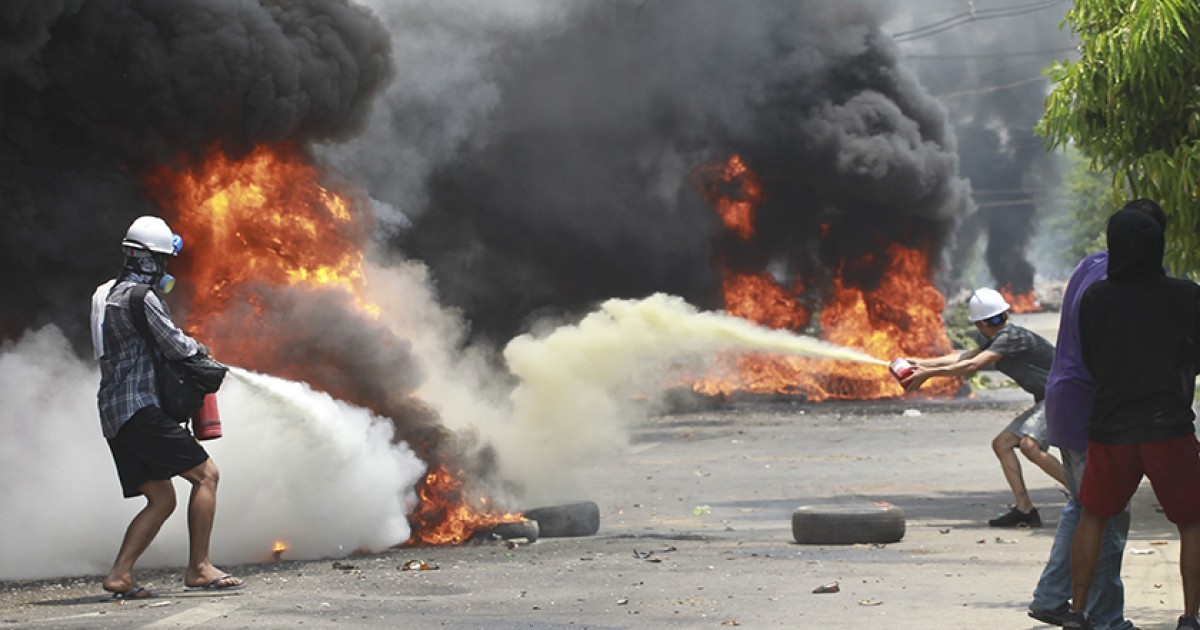 Fears that Myanmar’s military would launch a brutal crackdown to mark Armed Forces Day were realized Saturday when security forces reportedly killed more than 110 people across the country in the bloodiest massacre since the army seized power in a coup last month.

While soldiers paraded on the empty streets of the isolated capital, Naypyidaw, in front of dignitaries from countries including Russia and Thailand, security forces across the nation gunned down scores of unarmed protesters and passersby, including a 13-year-old and a 16-year-old, according to local news reports.

“Security forces are murdering unarmed civilians, including children, the very people they swore to protect,” U.S. Ambassador to Myanmar Thomas L. Vajda said in a statement. “This bloodshed is horrifying. These are not the actions of a professional military or police force.”

The bloodletting comes one day after the junta warned protesters were “in danger of getting shot to the head and back.” Previously, the highest death toll in a single day since the coup took place Feb. 1 was believed to be 90 on March 14, according to rights group Assistance Assn. for Political Prisoners. At least 440 civilians have been killed in total.

The scenes of wanton violence against protesters demanding the release of democratically elected civilian leaders Aung San Suu Kyi and Win Myint raise the pressure on the international community to act as the crisis pushes Myanmar toward civil war.

In less than two months, the Southeast Asian nation of 54 million has transformed from a weak, but budding, democracy to a killing field reminiscent of the nearly five decades of military dictatorship that preceded political reforms in 2011. The military, known as the Tatmadaw, views itself as guardian of Myanmar’s sovereignty and will probably continue slaughtering civilians because the majority of the country will not accept its rule.

Violence began early Saturday in Yangon, also known as Rangoon, when security forces opened fire on protesters demonstrating in front of a police station in Dala township, killing at least four, according to local media reports.

Witnesses said soldiers fired live ammunition at protesters in Yangon’s Sanchaung township, a neighborhood that has served as the heart of the protest movement.

One protester, who gathered with 60 other people Saturday morning in Sanchaung, said about 20 soldiers arrived in two military vehicles shortly after the demonstration began.

“As soon as they arrived, they started shooting us directly with real bullets several times without any warning,” the protester said.

The protester, who declined to share her name to protect her safety, saw three civilians shot initially, one in the chest and two in the legs. As the others turned to run, another was shot in the head.

“While I was running, I was crying and I was really afraid,” she said. “I couldn’t look back at him again.”

As the protesters scattered and took shelter, she said, she could hear the soldiers taunting them.

The clashes continued throughout the day in Sanchaung, with protesters shouting slogans and then fleeing as security forces came closer.

One protester who was unable to escape was seen being beaten while in police custody.

A protest organizer in Yangon’s Hlaing township said he took to the streets at around 7:30 a.m. with nearly 500 others.

At 4:30 p.m., he said, a police vehicle came toward the demonstrators.

“Eight police and two soldiers got out and shot one of the male protesters in the head right in front of me without warning,” said the protester, who also declined to give his name.

Rumors had abounded that the military would launch a major offensive Saturday. Many believed the junta wanted to quell the national protest movement by Armed Forces Day, which commemorates armed resistance against the Japanese during World War II.

During a televised address Saturday, the junta’s leader, Senior Gen. Min Aung Hlaing, justified the crackdown as a bid to protect the country.

“The army seeks to join hands with the entire nation to safeguard democracy,” he said.

Min Aung Hlaing again pledged to hold new elections, this after the military refused to recognize the results of November’s national polls, which delivered another landslide victory to Suu Kyi’s National League for Democracy party.

Kyaw Win, director of the Burma Human Rights Network, said the military is increasingly targeting young children and those not participating in the protests. A 13-year-old was among those killed Saturday, and a 7-year-old was shot dead in Mandalay on Tuesday.

“The fascist military wants to prove that no one is safe, and no one will be spared, even the innocent children,” he said, calling on the international community to impose a global arms embargo on Myanmar.

“This is not a war but a massacre and clearly it is a crime against humanity,” Kyaw Win said.

Earlier this week, Save the Children said at least 20 minors had been killed since the coup, adding that it was “horrified” by the targeting of children, which shows “a complete disregard for human life.”

Rights activists have increasingly called for a global arms embargo, sanctions against military interests and for a case to be opened against the junta at the International Criminal Court.

Myanmar is not a signatory to the Rome Statute, which established the International Criminal Court, but it is already facing accusations at the court of genocide against the Rohingya Muslim minority.

The U.S. Treasury said it is “targeting the Burmese military’s control of significant segments of the Burmese economy, which is a vital financial lifeline for the military junta.”

The conglomerates have a vast business empire that includes natural resources and precious gems, alcohol, ports and logistics.

In a separate incident Saturday, the U.S. Embassy in Myanmar confirmed that shots were fired at the American Center in Yangon. There were no injuries reported at the building, which is near the embassy and used for cultural exchanges.