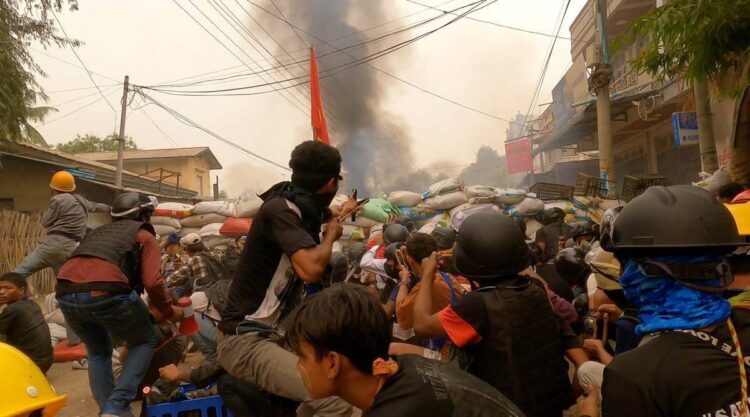 Myanmar’s junta announced Wednesday it is implementing a unilateral one-month ceasefire, but made an exception for actions that disrupt the government’s security and administrative operations — a clear reference to the mass movement that has held daily nationwide protests against its seizure of power in February.

The announcement came after a flurry of combat with at least two of the ethnic minority guerrilla organizations that maintain a strong presence in their respective areas along the borders.

More than a dozen such groups have for decades sought greater autonomy from the central government, sometimes through armed struggle. Even in times of peace, relations have been strained and ceasefires fragile.

The movement against the Feb. 1 coup that ousted the elected government of Aung San Suu Kyi focuses on civil disobedience, calling on employees in the public and private sectors to stop work that supports the machinery of governing.

It has been seeking an alliance with the ethnic minority armed groups to boost pressure on the junta. it would like them to form what they are calling a federal army as a counterweight to the government armed forces.

Largely peaceful demonstrators in the cities and towns of Myanmar have been facing police and soldiers armed with war weapons that they have used freely.

At least 536 protesters and bystanders have been killed since the coup, according to Myanmar’s Assistance Association for Political Prisoners, which counts those it can document and says the actual toll is likely much higher.

There was no immediate reaction to the ceasefire announcement from the ethnic minority forces. Several of the major groups — including the Kachin in the north, the Karen in the east and the Rakhines’ Arakan Army in western Myanmar — have publicly denounced the coup and have said they will defend protesters in the territory they control.

The Kachin Independence Army, the armed wing of the Kachin Independence Organization, attacked a police station in Kachin state’s Shwegu township before dawn Wednesday, according to local news outlets The 74 Media and Bhamo Platform. The attackers were reported to have seized weapons and supplies and wounded one police officer.

The Kachin have staged a series of attacks on government forces in their territory since the coup, saying the latest round of fighting was triggered by government assaults on four Kachin outposts.

After one Kachin assault in mid-March, the military retaliated with a helicopter attack on a Kachin base.

Myanmar’s military followed with airstrikes through Wednesday that killed at least 13 villagers and drove thousands more across the border into Thailand, according to the Free Burma Rangers, an established humanitarian group that provides medical assistance to the area’s villagers.

After the airstrikes, the Karen National Union issued a statement from one of its armed units saying Myanmar military “ground troops are advancing into our territories from all fronts” and that it may have to respond. The KNU is the main political body representing the Karen minority.

The conflict in eastern Myanmar spread the crisis to neighbouring Thailand, where an estimated 3,000 Karen took temporary shelter. Prime Minister Prayuth Chan-ocha said they quickly went back across the border voluntarily and were not forced by Thailand.

Thai authorities said Wednesday that only about 200 remained in the country and were preparing to go back.

Protests continued in Myanmar’s cities against the military takeover that reversed a decade of progress toward democracy in the Southeast Asian country that came after five decades of army rule.

Demonstrators marched through at least one area of Yangon despite reduced numbers in the face of the ever-climbing death toll. The mainly young protesters in the city’s Hlaing suburb stopped to honor a protester killed in an earlier confrontation with security forces.

A long column of teachers, perched on motorbikes, kept the spirit of opposition to the coup alive in southern Myanmar. Two per bike, they carried signs reading “We Want Democracy” and shouted slogans as they rode through the town of Launglone and into the surrounding countryside.

Bystanders applauded as the convoy passed.

An outside visitor was able to see Aung San Suu Kyi for the first time since she was detained when the military staged its coup. She spoke by video link with one of her lawyers, Min Min Soe, according to the online news site The Irrawaddy.

Suu Kyi has been held on several minor criminal charges, and the army said it is investigating more serious allegations of corruption against her. Her supporters dismiss the legal actions as politically motivated, aimed at discrediting her and preventing her from returning to the political arena, where she is the country’s most popular figure.

The Irrawaddy quoted Min Min Soe saying that Suu Kyi, who is thought to be held somewhere in the capital Naypyitaw, is in good health.

“She even urged us to stay healthy. She was smiling and looked relaxed,” the lawyer said.

According to the Assistance Association for Political Prisoners, 2,729 people have been detained in the crackdown since the coup, and arrest warrants issued for 120 others.