Myanmar May Target Free Speech in Effort to Stifle Protests 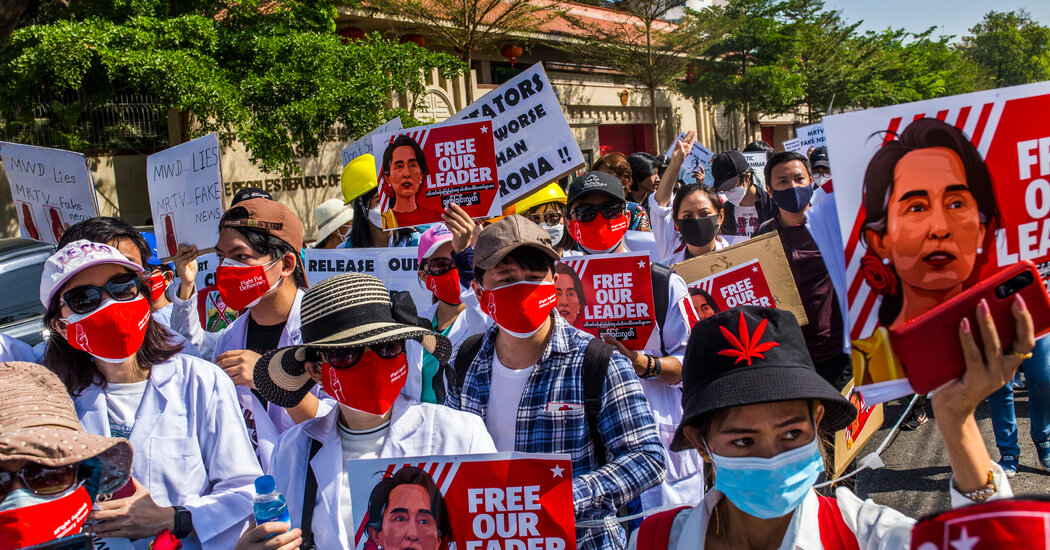 The military government in Myanmar has increasingly used nighttime arrests, legal threats, a curfew and a ban on large gatherings to tame weeklong anti-coup protests that have spread from the cities to the countryside. Now, civil society groups fear that the military is preparing a new law that would further restrict online expression and limit the privacy rights of citizens.

One telecommunications company, Telenor, said Friday that it was aware of the proposal and was reviewing it. A coalition of 158 civil society organizations signed a statement raising concerns that the potential new law would lead to the widespread arrest of government critics.

Myanmar already has harsh laws restricting online speech, but opponents of the military say the proposed law is so broad that it would allow the authorities to arrest anyone who criticized the government online and imprison them for up to three years. Critics also said the proposed law would require telecommunications companies to cooperate with the government and provide information on their customers.

The military, which has ruled the country for most of the last 60 years, has a long history of using violence to suppress protests, including gunning down pro-democracy demonstrators in 1988 and 2007. The Myanmar Army, or Tatmadaw, has never been shy about showing the depths of its brutality, killing monks in the street and launching a murderous rampage against the Rohingya, leading to an exodus of the Muslim minority in 2017.

But a violent response to largely peaceful protests that have swept the country after the Feb. 1 coup could further isolate Myanmar at a time when military leaders want to maintain normal economic relations. Aside from a nationally televised speech Tuesday evening by the coup leader, Senior Gen. Min Aung Hlaing, the generals behind the junta have largely been silent as the civil disobedience movement has grown.

On Thursday, Gen. Min Aung Hlaing posted a statement on Facebook saying that coronavirus vaccinations were proceeding and repeating his call for “disciplined multiparty democracy.”

Since seizing power, the military has shut down the internet at times and blocked Facebook to disrupt communications among protesters.

Over the last 10 days, a civil disobedience movement against the military takeover has seeped into nearly every aspect of society. Many bank employees, rail workers, civil servants, doctors and nurses have refused to work, reducing the availability of medical care, slowing financial transactions and halting rail transportation.

A walkout by rail employees earlier this week prompted the closure of the Myanmar Railway, which under coronavirus restrictions was serving only several thousand commuters near Yangon, the country’s largest city. There was no indication of when it would reopen.

In Yangon, where hundreds of thousands of people filled the streets in protest earlier this week, actions were more muted as smaller impromptu demonstrations popped up in different neighborhoods. On Friday, thousands of protesters staged demonstrations at foreign missions in the city, including the Chinese and Russian embassies.

Demonstrators also have become more creative since the restrictions on gatherings were announced Tuesday. Some have paraded in horse-drawn carts or dressed in ball gowns. One group of animal lovers brought their dogs, another their snakes and lizards. Musicians played on the streets, weight lifters bared their chests, and a few young women wore bikinis while holding anti-coup signs.

“It’s wonderful to see all kinds of people joining in protest,” said U Wai Zin Thant, a private company manager in Mandalay who watched them online. “I never thought that I would see a fashion show, a music concert and a historical protest against the military coup at the same time.”

The protests have even come to the placid Inle Lake in central Myanmar, where the inhabitants seem to live in a bygone era. They dwell in houses built on stilts, grow vegetables in floating gardens and travel in long, narrow wooden boats. The fishermen are renowned for standing on one leg while rowing with the other.

But the community is not so remote that it has been bypassed by the protests. On Thursday, more than a thousand Inle Lake residents gathered by boat in a floating protest, with anti-military slogans written on their wooden paddles and placards spelling out words in English such as, “Get out dictators.”

“Maybe people think we live a peaceful life because we grow our vegetables for food and make our own boats for transportation,” said Ko Ngwe Toe, an Inle resident. “But we can’t neglect that the country’s democracy is being raped by the military.”

At several demonstrations earlier in the week, police officers crossed over to the protesters’ side to large cheers from the crowd. In the city of Loikaw in Kayah State, at least 40 male and female officers joined in chanting, “No dictatorship” and “People’s police” after switching sides.

But in the capital, Naypyidaw, two protesters were shot by the police on Tuesday, apparently with live ammunition. One victim, Mya Thwate Thwate Khing, 19, was shot in the head. She is being kept alive by a ventilator, said Dr. Wai Yan Kyaw at Naypyidaw Thousand-Bed General Hospital, where she is being treated.

“According to her injury, this must not be a rubber bullet,” the doctor said. “This must be a real bullet.”

A second patient, a man who was shot in the chest, has been released, he said.

The young woman’s sister, Mya Tha Toe Nwe, said the two of them had taken cover at the protest to avoid the spray from a police water cannon and were leaving when she was shot.

“There is no hope even with an operation,” she said. “I am deeply sad.” But she said she would not be deterred.

“We participated in the protest against the military coup because it’s not only for one person or one party,” she said. “We need to eliminate the military dictatorship from our country, and I will keep fighting.”

Many protesters applauded the decision by President Biden on Wednesday to impose sanctions on the generals behind the coup that would prevent them from gaining access to $1 billion in funds that their government keeps in the United States.

Mr. Biden, who has demanded that the military release the civilian leader, Daw Aung San Suu Kyi, from house arrest, said he would announce additional actions against the military leaders and their families. The United Nations Human Rights Council was scheduled to meet in a special session on Friday to consider taking action.

In recent days, the military has rounded up prominent leaders aligned with Ms. Aung San Suu Kyi’s party, the National League for Democracy, in midnight raids, including the chief ministers of 14 states, the popular mayor of Mandalay and her Australian economics adviser.

Among those detained were the chairman and a member of the Union Election Commission, which oversaw the November elections that the National League for Democracy won in a landslide. The military justified its coup by claiming electoral fraud. The authorities also raided the party’s headquarters in Yangon, seizing financial records, computers and data storage devices.

A doctor active in the civil disobedience moment in the southern Myanmar township of Ingapu was arrested and dragged away by plainclothes police officers Thursday afternoon while he was in the middle of stitching up a patient, his family said. He has not been heard from since.

The military announced on Friday that it would release more than 23,000 prisoners under an amnesty in honor of Union Day, a national holiday commemorating a 1947 independence agreement. Such mass amnesties are not unusual in Myanmar; the civilian government released nearly 25,000 inmates in April.

But democracy advocates expressed concern online that the junta could organize some of the prisoners into mobs to attack protesters, a tactic that critics said it has used in the past.