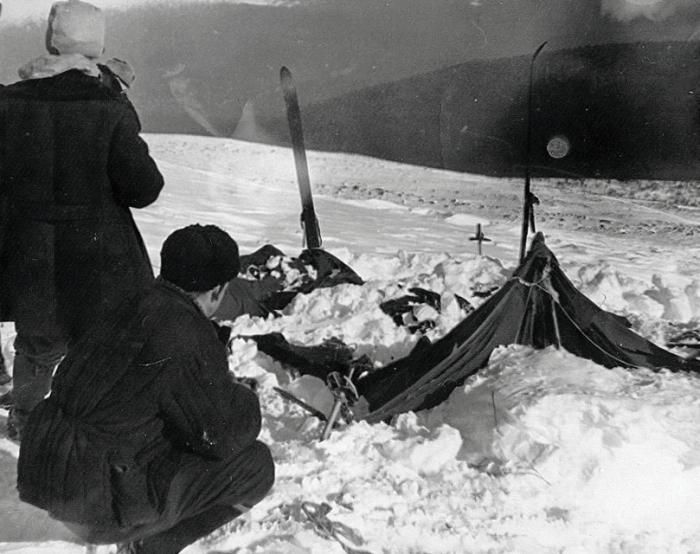 In late January of 1959, a group of nine students of the Ural Polytechnical Institute and an older ski instructor departed from the city of Sverdlovsk (now Yekaterinburg) on an expedition to Otorten Mountain in the northern Urals. Lead by Igor Dyatlov, an experienced mountaineer, the group traveled to the city of Ivdel first by train, then to Vizhay by bus. Riding a truck they headed to “Sector 41,” a woodcutting settlement, and then to the abandoned geological site “Nord 2,” the last human settlement in the wilderness.

On January 28, one of the hikers, economics student Yuri Yudin, had begun to feel quite ill. Tormented by severe pain, he decided to head back – yet unaware of the irony that his sickness just saved his life – while the remaining group of nine continued as planned. They proceeded on foot and skies following the Auspiya river into the mountains. Recovered photos and journal entries suggest that everything was fine, even if there was a lot of snow and the weather was bad, slowing down the hikers. Ten days into the trip, on the first of February, they set up a campsite for the night on the slopes of “Height 1079,” known to the indigenous Mansi population as Kholat Saykhl mountain.

A few weeks later, friends and relatives began to worry. On February 26, a search party discovers the abandoned tent on the slope. Nine pairs of footprints lead the search team down the slope towards the nearby woods. Under a large cedar tree at the edge of the forest next to the remains of an improvised campfire, two frozen bodies were found. The next three bodies were found at varying distances between the tent and the cedar tree, covered by snow.

Autopsies later revealed that all five had died of hypothermia. The last four hikers were found in May 1959 at the bottom of a small ravine inside the forest, covered by 3 meters (9 feet) of snow. Three of them had sustained lethal injuries, one had a fractured skull and two had fractured ribs. One had minor injuries and died of hypothermia.

Russian authorities quickly closed the case, noting that “the cause of death was an unknown compelling force which the hikers were unable to overcome.” Since that night, what happened to the hikers at the “Dyatlov Pass” prompted wild speculations that range from a serial killer, avalanches, animal attacks, secret weapons, a military cover-up, gravity anomalies, a fire in the tent, killer snowmen, UFOs and temporary insanity caused either by drug abuse or infrasound.

In an article published today in the journal Communications Earth and Environment, researchers present data suggesting a “freak avalanche” as the most likely explanation.

Modifying a computer program also used for realistic snow physics in animation movies, the researchers simulated an avalanche on the slopes of Kholat Saykhl. Varying the mass and speed of the snow slab, and comparing the results with data from car crash simulations, the team demonstrated that a 5-meters-long (or 16-feet) block of snow suddenly sliding down the slope could be enough to break the ribs and the skulls of some of the hikers.

Based on these results and contemporary documents by Russian investigators, the research team suggest the following reconstruction of the incident:

On the evening of February 1st, the sleeping hikers suddenly awakened, surprised by a slab of snow burying the part of the tent facing the slope. Four are partially crushed by the snow’s weight, sustaining severe yet not immediately fatal injuries. Panicking, somebody cut the tent open with a knife, sending the shoeless and underdressed hikers into the freezing night, with temperatures below -22°F. The group flees down the slope into the nearby woods. At the cedar tree, two hikers start a fire, realizing that the fading flame will not keep the group alive the entire night. Three hikers, despite the risk of further avalanches, try to find their way back to the tent, dying on the slope. Four of them, venturing deeper into the woods, try to find shelter in a snow cave but finally succumb to their injuries.

Back to Top
Close Add post
X
8 Insights From A 160 Year Study On Artists, Musicians, Actors And Authors…ScienceVisitors pass in front of a painting by Jean-Michel Basquiat intitled "Boy and Dog in a Johnnypump" AFP via Getty Images The arts and culture sector c…

X
Dogs Learn Words Quickly, But Only After Playing With Toys…ScienceThe border collie often tops lists of smartest dog breed. getty Learning an object's name after hearing it only a few times is one measure of intellig…
close