Home Science Nanosheets help in the detection of uric acid in urine, alcohol in breath

Nanosheets help in the detection of uric acid in urine, alcohol in breath 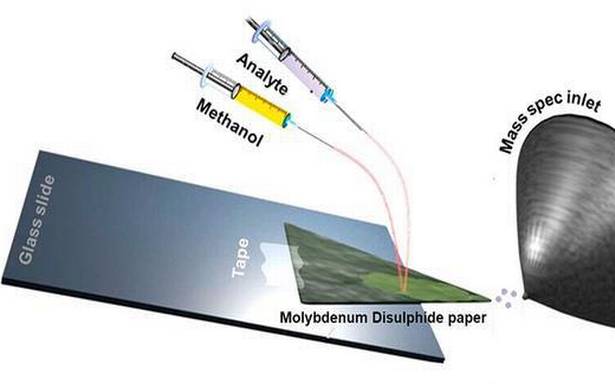 Mass spectrometry is an importantat tool and has helped win several Nobel Prizes. It provides valuable information about the composition and structure of molecules and has found applications from drug testing to carbon dating. Using this, researchers can ionise or break down the compound into simple ions and then identify the molecules based on their masses. The current process of ionisation requires electrical potential of a few kilo volts, heat or high energy ultraviolet lasers (UV-lasers). But now, researchers have developed a new method of soft ionisation using nanosheets which eliminates the need for external energy sources completely.

The team used a simple filter paper as a support material and coated this with 2D molybdenum disulphide (MoS2). “The 2D materials are sheet-like structures and graphene is a perfect example. You pull out sheets of carbon and create graphene. Similarly, this molybdenum disulphide was created as a thin sheet and spread on a paper. This modified paper produces an electric current when liquids flow over it,” explains Thalappil Pradeep from the Department of Chemistry at the Indian Institute of Technology (IIT) Madras. He is the corresponding author of the work published last week in ACS Nano.

The team observed that a flow of pure methanol over the nanosheet generates a record-high current of 1.3 microampere. The sample to be tested can be mixed with this methanol, and the induced current helps make ions of the compound to be tested.

The team then tested the device to measure uric acid. By simply flowing raw urine (about 5 microlitre) over the nanostructured surface and measuring the corresponding current (with no other stimulus), the team detected the uric acid in the urine of a healthy individual.

They also demonstrated that the device can be used as a self-energised disposable sensor for breath alcohol detection. The device was modified in such a way that the breath of a drunken person can interact directly with the flowing liquid on the MoS2-coated surface. A volunteer who had consumed 650 mL of beer containing 9% (v/v) alcohol blew over the paper, and the corresponding current was measured. While standard breath analysers detect breath alcohol concentration above 5%, this device could detect even less than 3%.

“The device can find many more applications: check glucose in blood, toxic chemicals in any liquid, pesticide or any contaminants in drinking water. The main plus point is that it can even detect very low levels. The current wet chemical or reagent-based methods are lengthy and require skilled labour. The new method is cost-effective, and all you need is simple paper coated with nanostructures. By just flowing the liquid and studying the spectrum, molecular detection has now been made simple and easy,” adds the first author of the paper Pallab Basuri, a PhD scholar at the institute.