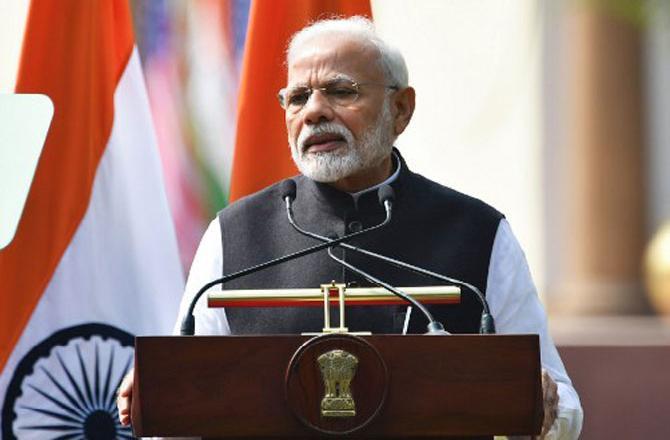 Amid the farmers’ agitation, Prime Minister Narendra Modi on Friday transferred more than Rs 18,000 crore to over nine crore beneficiary farmer families with the push of a button. Defending the farm laws, Modi said some people were misleading the farmers.

This is the seventh instalment under the PM-Kisan Samman Nidhi Scheme — a direct benefit transfer scheme for the farmers.

Speaking on the occasion, Prime Minister Narendra Modi said, “I am satisfied that now there are no middlemen, and the farmers are getting money directly. Till now 1,10,000 crore has been deposited without any cut and commission. This is good governance.”

He lashed out at the West Bengal government for not facilitating this programme and denying benefits to 70 lakh farmers of the state. He said the state governments of different political parties in other states have, however, facilitated this PM Kisan Scheme.

Eyeing on polls, the Prime Minister targeted the Left parties for not doing anything in West Bengal when they were in the regime there, and now have reached Punjab.

The Prime Minister also targeted the political parties for using farmers and said, “They are trying to disturb the economy of the country and also are giving nightmares to the people of Delhi”.

“If APMC is good, then why it is not in Kerala. They are doing this to remain politically relevant. The online Mandi’s have done business of Rs one lakh crore.

“The government has tried to decrease the input cost of the farmers through various means. The government is promoting micro-irrigation per drop more crop. We have implemented the Swaminathan commission report. The government is building infrastructure and storage near the villages,” said the Prime Minister.

“The farmers can sell their produce on MSP anywhere in the country. If the farmers are getting so many rights, then what is the problem. Some are saying that MSP and Mandis will be finished, but after the farm laws were passed, the government announced the MSP,” said the Prime Minister.

Modi also interacted with the farmers from six different states during the event. The farmers shared their experiences with the PM-KISAN scheme and also on various other initiatives taken by the government for the welfare of the farmers.

The PM-Kisan Samman Nidhi Scheme was launched in February last year. It is a Central scheme with 100 per cent funding from the Central government. Under the PM-KISAN scheme, a financial benefit of Rs 6,000 per year is provided to the eligible beneficiary farmers, payable in three equal four-monthly instalments of Rs 2,000 each.

The income support is being provided to small and marginal farmer families having combined land holding or ownership of up to two hectares initially, but has been extended to all farmers in all the states, except West Bengal. The state governments and the UT administrations identify the farmer families which are eligible for support as per the scheme guidelines.

The amount is directly transferred into the bank accounts of the beneficiaries through the direct benefit transfer (DBT) mode.