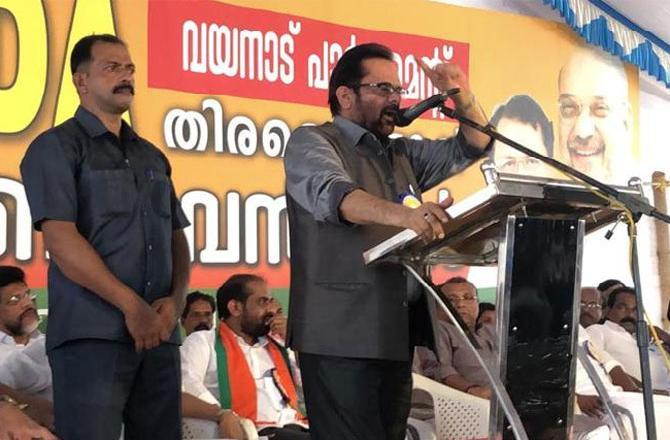 Union Minority Affairs Minister Mukhtar Abbas Naqvi has claimed that the Narendra Modi government has done more for Indian Muslims and other minorities in the last six years compared with Congress rule since Independence.

He said that while the Ministry of Minority Affairs was seen as a “part-time portfolio” during the earlier Congress rule, it was now a full-time Ministry in the Modi government.

“The Modi government did away with the policy of minority appeasement and instead worked towards ‘sabka saath, sabka vikas and sabka faith’,” Naqvi said in an exclusive interview with IANS.

“The avenues of appeasement were shut after the Modi government came to power at the Centre. Now, development without any discrimination is happening. No one can give even one example of discrimination against anyone in the last six years,” he asserted.

Naqvi said that the recruitment of Muslims in government jobs under NDA rule had increased, compared with earlier Congress governments.

“When the NDA came to power, Muslims had only less than 4 per cent participation in administrative services. Today, it has gone up to more than 10 per cent.

“The participation of Muslims in administrative services has increased to 152 in 2017, 160 plus in 2018 and even more in 2019. Capability has come to be valued under this government,” the Minority Affairs Minister said.

Naqvi also claimed that Indian Muslims were changing their mindset about the BJP. “In the 2014 general elections, we got 16 per cent minority votes, and 21 per cent in 2019. This shows that in the last 70 years, the poison injected into Muslim minds by our opponents against the BJP is decreasing.”

As for the abrogation of Article 370 of the Indian Constitution in the erstwhile state of Jammu and Kashmir, which he visited recently, Naqvi claimed that the Centre’s move had rid the UT of “370 problems”.

“Some people were using Article 370 as a protective shield, but their arrogance has since been shattered,” the Minister claimed.

Naqvi is among the few BJP leaders who have been part of both the governments led by Modi as well as Atal Bihari Vajpayee.

Asked about the difference between the two governments, he said: “Prime Minister Modi has the style of working non-stop without getting tired. He believes in results, not in efforts. During the Vajpayee rule, the era of non-Congress governments and coalition politics gained ground.

“Despite a clear majority today in Parliament, Modi preferred to form his government in alliance with NDA parties.”

On the demands for implementation of the Sachar Committee recommendations given in 2006 regarding the minorities in India, the Minister said that while the Congress and its allies believed in the report, the NDA believed in results on the ground. “The Modi government works by looking at ground realities and not the report,” he quipped.

The Minister listed various government schemes formulated and implemented for the betterment of religious minorities in the country.

He said that Hunar Haat scheme was launched to provide opportunities and markets to artisans and craftsmen involved in specific trades. So far, more than five lakh artisans have been given employment by the Ministry at Hunar Haat, Naqvi said.