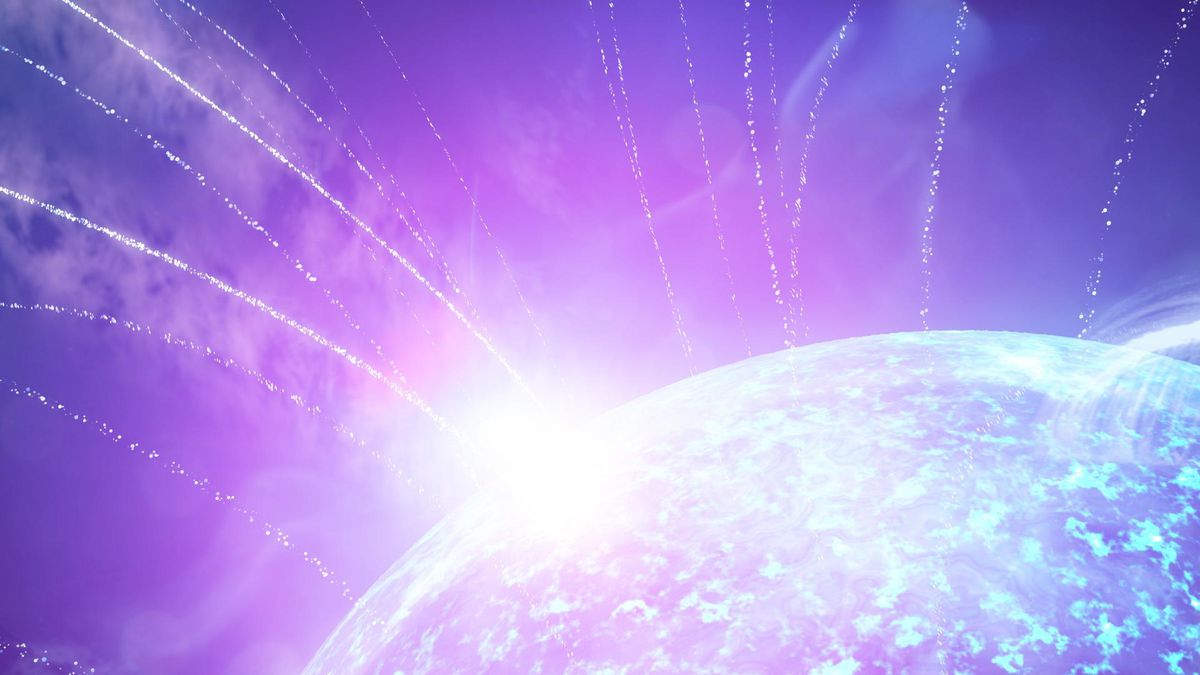 Scientists have detected a “giant cosmic flare” with huge “nuclear frying power” that blasted Earth last year—and it came from relatively close to us.

The event, which lasted just 140 milliseconds, occurred at precisely 4:42am U.S. Eastern Time on April 15, 2020. It’s spurned a bunch of papers, the latest of which were published last week.

Termed a gamma-ray burst (GRB), the “gigaelectronvolt” flare comprised of the highest-energy form of light.

It was detected by spacecraft around Mars, NASA’s Fermi Gamma-ray Space Telescope and the International Space Station orbiting Earth.

GRB 200415A came from a rare and very potent kind of neutron star only 11.4 million light years away. Cosmically-speaking, that’s pretty close for a giant flare—considering its nuclear frying power.

Also able to disrupt mobile phone reception, GRBs can be messengers from the very early history of the Universe—and in this case its source could be a very rare “magnetar” star.

The magnetic field of a magnetar is thought to be 10 trillion times the strength of a refrigerator magnet despite having a diameter less than the length of Manhattan.

What is a GRB?

A gamma-ray burst is produced from supernovas—the explosion of a single star. They normally last over two seconds and are detected on a daily basis.

Where do GRBs come from?

All GRBs found to date have been traced to supernovas or two neutron stars spiralling into each other. A neutron star is the densest object it’s possible to observe. They’re the crushed remnants of what’s left after a supernova explosion.

“When these massive stars die, they explode into a supernova,” said Professor Soebur Razzaque at the University of Johannesburg in South Africa, who led a team predicting GRB behavior for research just published in Nature Astronomy. “What’s left after that is a very small compact star, small enough to to fit in a valley about 12 miles/20km across. This star is called a neutron star. It’s so dense that just a spoonful of it would weigh tons on earth.”

It’s been traced to a “magnetar” in galaxy NGC 253 in the southern hemisphere constellation of Sculptor. The most highly magnetized neutron stars in the cosmos, magnetars may be the most extreme stars in the Universe.

“In the Milky Way there are tens of thousands of neutron stars, but of those only 30 are currently known to be magnetars,” said Razzaque. “Magnetars are up to a thousand times more magnetic than ordinary neutron stars. Most emit X-rays every now and then, but so far, we know of only a handful of magnetars that produced giant flares.”

It’s thought that slight disturbances to a magnetar’s magnetic field can cause eruptions of X-ray bursts that last for weeks. However, they could also be caused by a “starquake”—a mechanical failure of the magnetar’s crust.

What was the last giant cosmic flare like GRB 200415A?

The last “gigaelectronvolt” flare like 200415A was detected by astronomers was on December 27, 2004 when GRB 200415A disrupted communication networks. Erupting from a magnetar about 28,000 light-years distant, it produced measurable changes in Earth’s upper atmosphere.

So-called “gigaelectronvolt” giant flares are rarely detected largely because of the limited sensitivity and energy coverage of previous telescopes. GRB 200415A was found detected by NASA’s Mars Odyssey spacecraft, then six minutes later by NASA’s Wind satellite, which orbits between Earth and the Sun. About 4.5 seconds later the radiation passed Earth, triggering instruments on NASA’s Fermi Gamma-ray Space Telescope, a satellite and an instrument on the International Space Station orbiting Earth.

Largely because it’s so nearby. “The April 15 event is a game changer because we found that the burst almost certainly lies within the disk of the nearby galaxy NGC 253,” said Kevin Hurley, a Senior Space Fellow with the Space Sciences Laboratory at the University of California, Berkeley, discussing the burst at the virtual 237th meeting of the American Astronomical Society last week. “This was the most accurately localized magnetar outside of our galaxy so far, and we’ve really pinned it down now, not just to a galaxy, but a part of a galaxy where we expect star formation is going on, and stars are exploding. That is where the supernovas should be and the magnetars, too.”

So next time you drop a call or get interference during a phone conversation it could be because of an erupting star in its death throes soon after the beginning of the Universe.