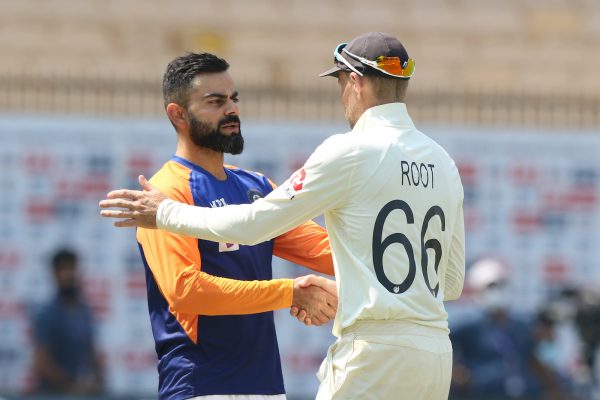 Virat Kohli succumbed to his fourth straight loss as Indian captain in Test matches upon his return to lead the side. India lost to England by 227 chasing 420 to win on the final day at the Chepauk. Jack Leach and James Anderson took seven wickets amongst themselves to restrict India from chasing the score down. Playing his 100th Test, Root won his 26th Test as captain and his sixth Test straight in the subcontinent.

Meanwhile, former England skipper Nasser Hussain in his column for Daily Mail spoke about the difference between Virat Kohli and Joe Root as Test captains. He spoke about how Kohli is a tactically inferior captain to Joe Root.

“In general, Root has been exceptional. It is India skipper Kohli who has been caught between two stools… I am not a massive fan of him as a tactician, because he tends to follow the ball and be a bit behind play at times, rather than dictating it. But as he and Root know, for all the analysis of actions and decisions, it is results that you are judged on,” Hussain wrote in his column for Daily Mail.

Virat Kohli’s return as Team India skipper was criticised by many after India lost to England in the first Test. Twitter even advocated the return of Ajinkya Rahane as the skipper after his recent success in Australia. He led India to a 2-1 series win against the Aussies after India lost the first test under Virat Kohli. The four-match losing streak has been Kohli’s longest ever as India captain.

Meanwhile, on the other hand, Ajinkya Rahane did not have the best of Test matches with the bat scoring 1 and 0. Despite that Virat Kohli has backed his deputy to come good.

“Ajinkya Rahane is, I have said this many times in the past as well, along with Cheteshwar Pujara is our most important Test batsman and he is going to continue to be. We believe in his abilities, we have believed in his abilities for a long time now. He is an impact player” said Virat Kohli.