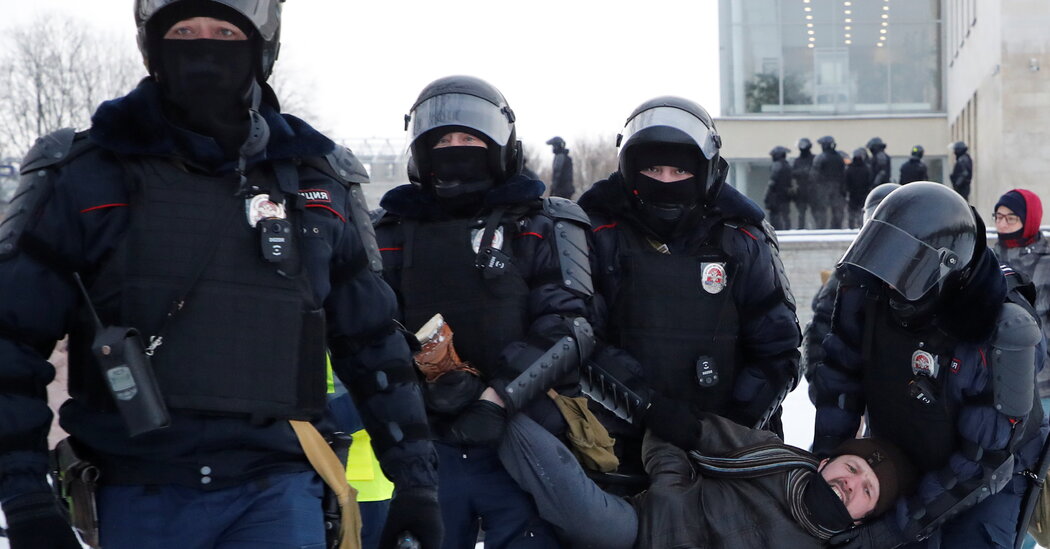 Braving bitter cold and the threat of arrest, Russians rally in cities across the nation.

MOSCOW — Thousands of protesters across Russia took to the streets on Sunday for a second consecutive week to rally for the jailed opposition leader Aleksei A. Navalny, and they were met by one of the most imposing shows of police force seen in the country’s recent history.

In Moscow, the police ordered seven subway stations around the Kremlin to close on Sunday and said pedestrian access would be limited in the center of the city — an unheard-of move in recent years disrupting the core of a metropolis of 13 million people.

Police officers were asking cafe owners to turn off their Wi-Fi, the Interfax news agency reported, a sign that the government was preparing to limit mobile internet access later in the day.

As they did one week ago, the protests started in Russia’s Far East and swept across the vast nation of 11 time zones, with demonstrations scheduled for noon in cities and small towns alike.

There were early indications that the gatherings in some cities appeared to be smaller than those of last weekend, but crowds in the thousands still turned out in some far-flung places like Yekaterinburg. The law enforcement presence appeared to be greatly stepped up everywhere.

Less than an hour before the protests in Moscow and St. Petersburg were scheduled to start, the protest organizers announced new starting points to try to avoid police cordons in those cities.

In the Siberian city of Novosibirsk, thousands of people packed the sidewalks of central streets. In the Pacific port city of Vladivostok, demonstrators were forced onto the ice of a frozen bay, with riot police officers in pursuit. And in Chelyabinsk in the Ural Mountains region, there was footage of riot police officers clubbing protesters with batons.

The defiant turnout in so many parts of the nation showed that the accumulated anger with President Vladimir V. Putin remains a potent force, even with Mr. Navalny and most of his main allies across the country now in jail.

Mr. Navalny, a 44-year-old anticorruption activist, fell into a coma after a poisoning in Siberia last summer, recovered in Germany, flew home to Moscow two weeks ago and was arrested at passport control.

At a court hearing on Tuesday, he could receive several years in prison over parole violations stemming from a 2014 embezzlement case that Europe’s top human rights court called politically motivated.

Mr. Navalny’s backers say only the pressure of street protests can force the Kremlin to release the opposition leader, along with the dozens of his associates and supporters across the country who are being threatened with prosecution. The Russian government has called the protests in his support illegal, threatening anyone who participates with jail time.

In the frozen port city of Vladivostok, a seven-day train ride from Moscow on the Sea of Japan, the police moved swiftly to try and block protesters from converging in the city center.

They erected barricades and closed underpasses. So the protesters took to the ice covering Amur Bay.

Clasping hands, they formed chains as they chanted “Putin is a thief!” and “Russia will be free!”

Their movements on the ice, captured on social media, looked almost like a dance.

Riot police officers, initially hesitant to follow on the frozen waters, decided to give chase. But it played out in seeming slow motion, with each side moving gingerly on the snow-covered expanse of ice under a gray late-afternoon sky.

It was just one of many remarkable scenes that played out on Sunday in eastern Russia, where large-scale protests are rare.

Although the crowd in Vladivostok was significantly smaller than one week ago, according to a local journalist, the police were taking no chances.

At least 96 people were detained, according to OVD-Info, an activist group that tracks arrests at protests.

“People were disappointed that there weren’t as many people and that there wasn’t as much activity as last Saturday,” the local journalist, Tatyana Menshikova, said by phone.

In the Siberian city of Irkutsk, where temperatures approached minus 20 Fahrenheit (minus 29 Celsius), the turnout was also significantly smaller than the thousands who protested last weekend — and the police presence even more imposing.

Aleksei Zhemchuzhnikov, a civic activist, said chains of riot police officers with full body armor and shields were deployed for the first time, cordoning off sections of the city center. Mobile internet access was cut off, he said.

“For Irkutsk, this was a first,” Mr. Zhemchuzhnikov said of the police response. “They were scared.”

Even before Russians gathered for a second week of protests, the Kremlin made it clear that any demonstrations would be met with an even greater show of force.

The huge scale of the nationwide operation of recent weeks to defuse the anger that the arrest of Aleksei A. Navalny sparked has revealed the deep anxiety in the Kremlin.

Images and video footage from across the country showed lines of hundreds of riot police officers deployed to prevent Mr. Navalny’s supporters from being able to gather in one place. In the Siberian city of Krasnoyarsk, the authorities dumped snow onto two central squares to make them impassable for pedestrians.

At the protests last weekend, which took place in more than 100 cities, some 4,000 people were arrested, according to an activist group. Many were later released, but some received jail terms for violating public-gathering laws and others have been threatened with criminal prosecution for alleged violence.

When the police came to detain Anastasia Vasilyeva, a physician who leads a pro-Navalny group called the Alliance of Doctors, she used the piano as her method of defiance.

Some of Mr. Navalny’s close allies have also been detained in recent days, including his brother, Oleg Navalny, and Maria Alyokhina, of the punk band Pussy Riot. They were both placed under house arrest.

Among the chants at Sunday’s protests, footage circulating on social media showed, was: “Aqua disco!”

The chant showed how deeply an investigative report that Aleksei A. Navalny’s team released shortly after his arrest, about what they describe as President Vladimir V. Putin’s secret palace on the Black Sea, has penetrated the national consciousness.

The 113-minute-long report, with more than 104 million views on YouTube, reveals the details of a compound Mr. Navalny says was built for Mr. Putin at a cost of more than $1 billion, complete with an underground hockey rink, a hookah lounge with a pole-dancing stage, and a fountain area called an “aqua disco.”

The report gained so much traction that the Kremlin, beyond simply denying it, in recent days launched a counteroffensive to claim that Mr. Putin had nothing to do with the palace. On Saturday, Russia’s state television channels aired an interview with a billionaire friend of Mr. Putin, Arkady Rotenberg, in which the business magnate claimed that the property actually belonged to him.

“We want to build an apartment hotel there,” Mr. Rotenberg said. “It’s a beautiful place — a great find.”

Navalny’s return to Russia has transformed the political landscape.

The opposition leader Aleksei A. Navalny’s return to Russia on Jan. 17 has shifted the political landscape facing the Kremlin — both at home and abroad.

Inside the country, Russians unhappy with their president suddenly have a clear leader around whom to rally.

Opposition to President Vladimir V. Putin has long come in many hues — from Stalinists who dream of resurrecting the planned economy, to nationalists who want to restrict migration and annex more of Ukraine, to urban liberals who long for democracy and closer ties with the West. Rarely have these disparate groups come together as they have in the last week around Mr. Navalny — because the moment has arrived, more and more Russians say, when they can no longer abide passive acceptance of Mr. Putin.

Internationally, Mr. Putin faces new pressure as a result of the crackdown on Mr. Navalny and his supporters just as President Biden takes office.

On Friday, the executive director of Mr. Navalny’s Anti-Corruption Foundation, Vladimir Ashurkov, sent a letter to Mr. Biden urging the White House to respond to Mr. Navalny’s detention by imposing sanctions against 35 Russian officials, state media figures and business tycoons. Mr. Ashurkov said he had put together the list with Mr. Navalny before the opposition leader left Germany for Moscow.

“The West must sanction the decision makers who have made it national policy to rig elections, steal from the budget, and poison,” Mr. Ashurkov said in the letter. “It must also sanction the people who hold their money. Anything less will fail to make the regime change its behavior.”

A battle between the television and the refrigerator: What’s shaping Russian opinion.

KALININGRAD — Aleksandr Dobralsky took to the streets to protest the arrest of Russia’s most prominent opposition leader earlier this month. But he had other grievances as well.

“It’s like somebody stepped on your toe and said, ‘Just be patient with this for a little while,’” Mr. Dobralsky, a lawyer, said of the country’s economic woes. “How can you just wait for it to be over?”

Opinion polls have for a few years now been tracking a pivot in the national mood, away from what was called the “Crimea consensus” of wide support for President Vladimir V. Putin for annexing the Ukrainian peninsula and toward disappointment over slumping wages and pensions.

In Russia, the competition between the rally-around-the-flag effect of Mr. Putin’s assertive foreign policy and anger over the sagging economy is often referred to as the battle between the television and the refrigerator: Do Russians pay attention to the patriotic news on TV or notice their empty fridges?

“Rallying around the flag is no longer an antidote against protest,” Ekaterina Schulmann, an associate fellow in the Russia and Eurasia program at the British research institute Chatham House, said in a telephone interview.

A number of factors eroded the Crimea consensus.

The year Mr. Putin annexed Crimea, 2014, his ratings at home soared even as European countries, the United States and others responded with sanctions that threatened the economy.

The confrontational foreign policy was initially wildly popular. The economic pain took years to work its way into politics.

But financial stagnation brought on by sanctions, a decrease in foreign investment amid tensions with the West and low oil prices have forced the Kremlin to institute unpopular policies, including raising the retirement age to shore up government pension funds.

Russians’ average take-home wages adjusted for inflation have been in decline since the Ukraine crisis. They are now 10 percent lower than they were seven years ago.

It is taking a toll in public opinion.

“If you don’t already have a place in the system you don’t stand a chance” of finding work, Mr. Dobralsky said.

In his hometown, Kaliningrad, a Russian exclave between Poland and Lithuania, state propaganda warning of foreign danger was always a tough sell.

“They say, ‘The Americans are building a military base in Poland,’” Dmitry Feldman, a graphic designer working in Kaliningrad, said of the television news. “But we know the Poles. You ask an ordinary dude in Poland ‘Do you want to conquer Siberia?’ and they don’t know what you are talking about.”