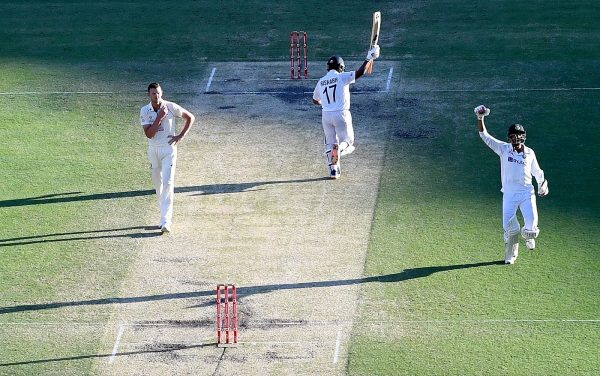 Rishabh Pant struck the winning runs as Team India scripted history beating Australia 2-1 Down Under consecutively to retain the Border-Gavaskar Trophy. What unfolded on the 5th day at the Gabba was no short of a drama and Pant’s batting partner in the last delivery Navdeep Saini revealed what the former told him before hitting the winning runs.

Incidentally, India chased down a mammoth total of 328 on day five of the Test to win the game by three wickets and clinch the four-match series. The defeat was Australia’s first at the venue since 1988. Meanwhile, the game was up for a tense finish as the host reduced Ajinkya Rahane & Co for 25 for 7 as they lost Washington Sundar and Shardul Thakur in quick succession.

After those twin setbacks, Navdeep Saini joined Rishabh Pant in the middle when India needed only three runs for victory. While everyone was at the edge of their seats, Pant dispatched Josh Hazlewood for a boundary down the ground to lead India to an epic win which will go down in the history books.

Recently, during a candid chat, Navdeep Saini revealed the conversation between him and Pant when the two were in middle. The pacer revealed how the young southpaw asked him not to worry and that he would score the required runs.

“It was the first time that I was batting alongside Rishabh. It was so much fun. I knew he will take India to the win. When I went to the crease, I looked at Rishabh and asked ‘kya karna hai’? (What do I have to do?). Rishabh said ‘kuch nahi karna, bass tej bhagna, jab bolunga, risky run mat lena He (Pant) went back to his crease and then came back again and told me ‘don’t worry, mai dekh lunga’ (Don’t worry, I will handle it),” Navdeep Saini told TimesofIndia.com.

“When he (Pant) hit the winning runs, he shouted run;. I knew he had asked me to run as fast as possible. I didn’t look at where the ball had gone and started running. When he stopped to celebrate, then I realised we had won (laughs). I knew he was going to hammer the bowler, added Navdeep Saini.

Rishabh Pant remained unbeaten on 89 runs and was adjudged the man of the match. Meanwhile, it was Shubman Gill and Cheteshwar Pujara, who had set the tone for the brilliant run chase.