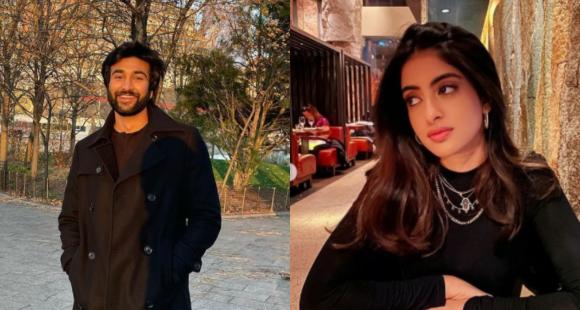 Meezaan Jafri, who made his debut in the 2019 film Malaal, recently was recognised for his performance in the same. Now, his rumoured ladylove Navya Naveli Nanda took to social media to root for him and even commented on his post.

Among the popular star kids, Navya Naveli Nanda has been the talk of the town since she made her personal Instagram account public. While Navya, who is Amitabh Bachchan”s granddaughter and Shweta Bachchan Nanda’s daughter, has been using her social media account to highlight her work with mental health issues, she also has been cheering for her loved ones. Speaking of this, recently, she shared a special post for rumoured beau Meezaan Jafri as he received recognition for his debut performance in 2019 film, Malaal.

While Meezaan shared a photo on social media with the certificate of recognition, Navya reposted his post on her Instagram story and wrote, ‘Congratulations!.’ Further, she even dropped a sweet comment on Meezaan’s post and wrote, ‘Yayy!.’ The gorgeous star kid has been rumoured to be with Meezaan for quite some time. Even their camaraderie in the comment section of each other’s posts gets noticed by netizens. Recently, when Navya had shared a couple of photos on her handle, Meezaan’s comment sparked their dating rumours.

While in interviews previously, Meezaan has maintained that he and Navya are nothing more than ‘good friends’, fans of the star kids think otherwise and hence, several times their cute banter in the comments on each other’s posts gets noticed by all. Meanwhile, Navya has been spotted a couple of times in the city with brother Agastya Nanda. She stunned fans when she made her Instagram account public and her photos took over the internet. On the other hand, Meezaan made his debut with Malaal in 2019. Now, he will be seen in Hungama 2 with Shilpa Shetty Kundra, Paresh Rawal and Pranitha Subhash. The film is helmed by Priyadarshan and is produced by Ratan Jain, Ganesh Jain, Chetan Jain and Armaan Ventures.

Back to Top
Close Add post
X
KUWTK: Khloe Kardashian And Tristan Thompson Planning To Give Daughter True A Sibling – Insider Deta…GossipsWhen the trailer for the last ever season of Keeping Up with the Kardashians dropped, fans learned that Khloe and Tristan might be planning on having …

X
Take a Tour of Josiah Duggar and Lauren Swanson’s Gorgeous Home…GossipsCounting On crib! Josiah Duggar and his wife, Lauren Duggar (née Swanson), have transformed their marital home into the perfect place for their family…
close