Actress Neetu Chandra opened up on being removed from films and getting replaced by contemporaries. She revealed she once got replaced by Kangana Ranaut on R Madhavan’s recommendation in film Tanu Weds Manu 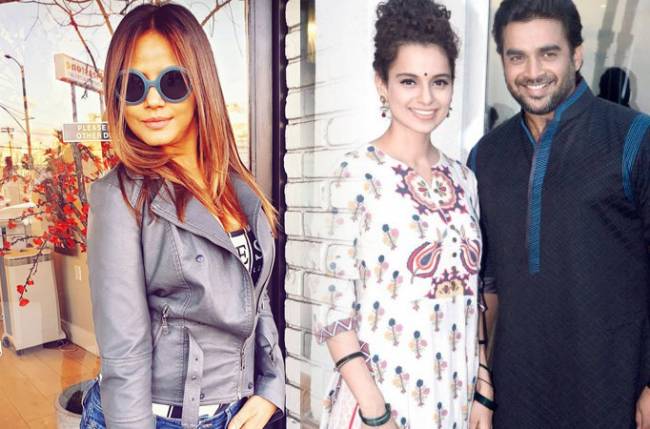 MUMBAI: Neetu Chandra made her Bollywood entry with film Garam Masala. She went on to star in a Telugu film later and also featured in a Madhur Bhandarkar film titled Traffic Signal. The actress who has also worked in Oye Lucky! Lucky Oye!, said that she has been ‘removed’ from six films. In an interview, apart from being removed from six films, Neetu Chandra revealed she once got replaced by Kangana Ranaut.

Speaking to a leading media portal, Neetu Chandra revealed that she got replaced by Kangana on R Madhavan’s recommendation in film Tanu Weds Manu. Chandra then recalled a comment made by R Madhavan where he had claimed to have recommended Ranaut for the lead role in the Aanand L Rai film. She quoted, “I’m talking about Madhavan. He said, ‘There was another actress who was signed for Tanu Weds Manu, but I recommended Kangana’s name’.” Neetu added, “That actress was me, the one who had signed Tanu Weds Manu earlier.”

The Traffic Signal actress said that such things keep happening to her, but added that it is a part of the struggle. She continued, “These kinds of things kept happening. I was removed from six movies in the past. No one would pick up the phone and call me. Neetu had to (make calls) for Neetu. But this is the journey, and this is how I had to learn things.” Later, when asked why she did not continue if she had been signed already, the actress said, “How do you continue? Do you think it depends on me if I want to continue the project?” She then said that for any reason if the hero is recommending someone else, she doesn’t come from that sort of background where she can stand her ground. She added, “For any reason, if the director thinks that the hero is recommending somebody else… I don’t come from the sort of background where I can (stand my ground). I’m helpless.”

Meanwhile, Neetu Chandra finally said that she holds no grudges towards anyone and spoke about ‘destiny’. She also revealed that she had another project with filmmaker Aanand L Rai in the pipeline, which did not happen. Speaking of the film Tanu Weds Manu, it was a hit. The sequel was an even bigger blockbuster.

ALSO READ – (Check out the then and now picture of actor Anil Kapoor Riding A Horse; and here is what the actor has jokingly said)

Varun & Natasha wedding, Akshay & Paresh to reunite for Oh My...

Hello, Bollywood buffs! As this day comes to an end, we are...
Read more

Kangana Ranaut teases Swara Bhasker with a post on ‘Class and Crass’,...

Panga turns 1: 5 reasons why Kangana Ranaut’s film is an ode...

Irrfan Khan’s son Babil on carrying his legacy forward: I don’t want to do a Rs. 100 crore film with no artistic value |...

Sara Ali Khan shared pics of herself enjoying a floating breakfast during her Maldives vacay, READ