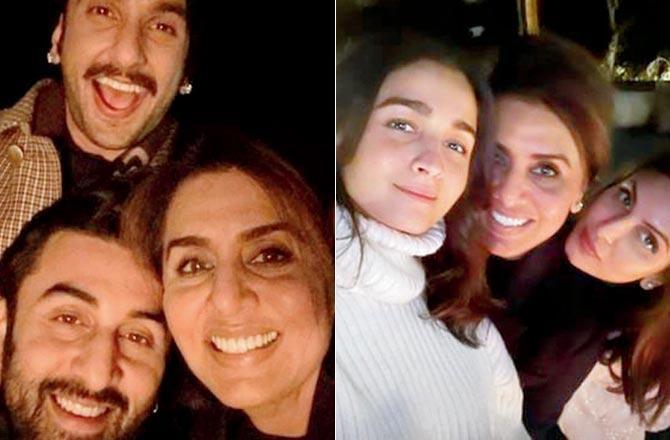 Ever since news broke that the Kapoors and the Bhatts, along with Deepika Padukone and Ranveer Singh, are at the Ranthambore National Park in Rajasthan to ring in 2021, people had been speculating about whether Alia and Ranbir were getting engaged.

Neetu Kapoor, however, put speculation to rest about their holiday by posting a snapshot with Ranbir Kapoor and Ranveer Singh. It’s a happy coincidence for them. Riddhima Kapoor Sahni shared a picture with mom Neetu, and Alia Bhatt.

Not just this, Kareena and Karisma’s dad, veteran actor Randhir Kapoor, said in a chat with  indianexpress.com, “It is not true. If Ranbir and Alia were to get engaged today, my family and I would have also been there with them. Ranbir, Alia and Neetu have gone there for holidays and to bring in the new year. The news of their engagement is incorrect.”

Ranbir Kapoor, in a recent interview, had confessed that if it weren’t for the COVID-19 pandemic, he and Alia Bhatt would be married this year. He shared, “I don’t want to jinx it by saying anything. I want to tick mark that goal very soon in my life.”

Speaking about the lockdown and whether he took any online classes, Ranbir said, “My girlfriend Alia is a bit of an overachiever, and she probably took every class there is — from guitar to screenwriting. I always feel like an underachiever next to her. But no, I didn’t take any classes. Initially, we were dealing with the family crisis, and then I got into reading, spent time with my family, and I watch two-three films every day.”