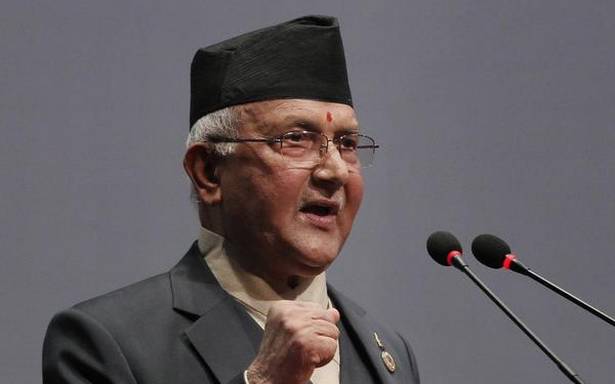 The main Opposition Nepali Congress (NC) has called an emergency meeting of the party on Sunday.

Nepal’s beleaguered Prime Minister K.P. Sharma Oli on Sunday recommended the dissolution of Parliament, amidst a prolonged tussle for power between him and former premier Pushpa Kamal Dahal Prachanda.

Prime Minister Oli reached Rashtrapati Bhawan with the decision of the council of ministers.

The move comes as the intra-party feud reached climax in the ruling NCP which has been witnessing months long tussle between two factions, one led by Prime Minister and Party’s chairman Oli and another led by Mr. Prachanda, also the executive chair of the party and former premier.

Senior leader of the ruling NCP and former prime minister Madhav Kumar Nepal has termed the move as unconstitutional.

Mr. Prachanda and Mr. Madhav Nepal faction has been urging Mr. Oli to quit the post of Prime Minister amidst growing accusation and counter-accusation between the two factions in the ruling NCP.

In June, Mr. Oli, 68, claimed that efforts were being made to oust him after his government redrew the country’s political map by incorporating three strategically key Indian territories.

As per the provision of Nepal’s Constitution, there is no provision of dissolving Parliament by the Prime Minister of a majority government.

As long as there is a possibility of forming a government from Parliament, there is no provision to dissolve the House, said constitutional expert Dinesh Tripathi.

Meanwhile, the main Opposition Nepali Congress (NC) has called an emergency meeting of the party on Sunday.

The move comes a day after the NC and the Rastriya Janata Party decided to ask the President for summoning a Special Session of Parliament.