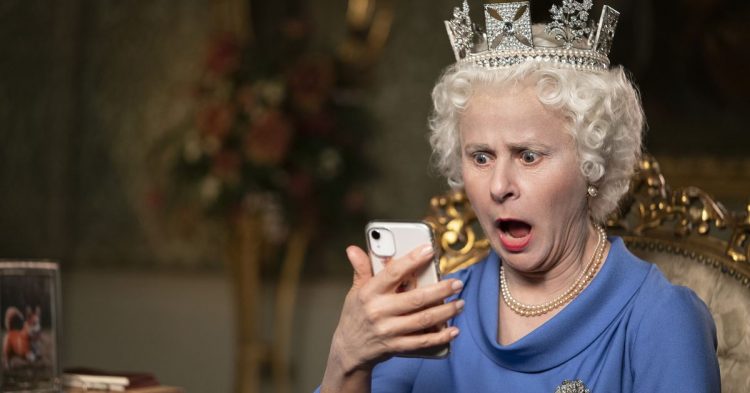 In the opening moments of Netflix’s new comedy special Death to 2020, Samuel L. Jackson, playing a jaded veteran reporter named Dash Bracket, asks the fictional filmmakers what their fictional documentary is for.

The offscreen interviewers never answer the question, and that lack of clarity sums up this hour-long parody. A mockumentary “year in review” from Charlie Brooker, a.k.a. the Black Mirror guy, Death to 2020 is an experiment that never justifies itself.

Star-studded and full of rote archival footage, Death to 2020 is aggressively bland, as if something about 2020 defied Brooker’s attempts to parody it. It’s not as if he doesn’t make the effort: The skit-filled satire boasts nearly 20 writers. There aren’t 20 jokes to be found in this retrospective, however, and that’s not because the subject isn’t rife with absurdity.

But unlike Brooker’s more shrewd comedic efforts — for example, the acerbic satire of Black Mirror’s Gamergate-inspired season four episode “USS Callister” — this outing is completely toothless. Most of the show’s 67 minutes just tell us what we already know, because we just lived through it. The premise of Death to 2020 seems to be that the audience will enjoy reliving the year, much in the way that Rifftrax fans enjoy subjecting themselves to bad movies. But the horrors of 2020 aren’t exactly A-list box office draws or must-watch material — and without quality commentary to enliven the trip down memory lane, the film is a tedious hour wasted.

From the beginning, Death to 2020 is palpably unfunny. Hugh Grant dons a blond wig and plays a historian who snarks about politicians. Tracey Ullman dons a blonde wig and plays the queen, who snarks about Meghan Markle. There’s an Elon Musk parody named Bark Multiverse (Kumail Nanjiani), who builds a survival bunker, because of course there is and of course he does. A scientist named Pyrex Flask (Samson Kayo) drops the mildest humor imaginable about Covid-19 and the pandemic.

It’s all incredibly banal and deeply uninspired. The most stringent thing the documentary has to say about Republicans who support Trump is — wait for it — they’re creating their own reality. The most stringent thing it can find to fling at Joe Biden is — wait for it — he’s really old. I bet you can already guess exactly what the writers think of cancel culture. That’s right: They’re not fans!

This type of paint-by-numbers humor doesn’t really lend itself to tackling deeper aspects of the culture war, such as the ongoing epistemic crisis or the protests against police brutality, but Brooker and company have, of course, given themselves the assignment of raising those issues too. It’s all in the service of painting the coronavirus as a four-in-one apocalyptic horseman, bearing down on us for our sin of spending too much time screaming at one another on Twitter.

Brooker does love skewering narcissistic, extremely online types for being too addicted to social media. But if that sermon felt empty when it was dressed up in Black Mirror’s fancier clothing, here, where it’s framed as the mockumentary’s main, threadbare takeaway, it just comes off as vapid and unoriginal. Perhaps Death to 2020’s absolute worst offense is that it wastes Stranger Things’ resident teen dad, Joe Keery, on its dumb social media jokes, tarnishing his hitherto flawless track record. We get it, Charlie Brooker: YouTubers and influencers are all shallow and clout-obsessed, and 2008 wants its punchlines back. Thank u, next.

Brooker achieves something close to meaningful commentary on the year only when he and the rest of the writers stop cracking tired jokes and allow the absurdity of the year’s images to speak for themselves. For example, during a clip from an anti-Covid-19 protest, one would-be patriot holds a sign that proclaims, “The vaccine is in the boxcar” — an apparent reference to the Holocaust. This moment goes unaddressed by the film, because it’s nearly unaddressable. How do you respond to that level of disconnect from reality?

Unfortunately for us, those moments of silent commentary are much too rare. Brooker and his army of writers cover every major beat from the last 14 months — if not exhaustively, then exhaustedly (and exhaustingly). The infamous US presidential debate? “A rap battle in a senior home.” As for Trump, perhaps he’d have been less susceptible to Covid “if someone told him white hoods protect against the virus.”

I take it back. The worst offense of Death to 2020 isn’t that it wastes so many of its star-studded cast members, from Leslie Jones to Lisa Kudrow. It’s that, for all it wants to paint social media as the enemy, every bit of its humor feels like a social media rehash. It’s as if the humor writers searched Twitter for the algorithmically generated “top” tweets on every one of their assigned topics, scribbled down anything with more than 1,500 likes, and called it a day.

Maybe if you truly weren’t paying any attention to world news, or social media, during the last 12 months, you might get something out of this hit parade. But otherwise, Death to 2020 is ultimately just more of the same painfully humorless noise that’s made up most of the year.