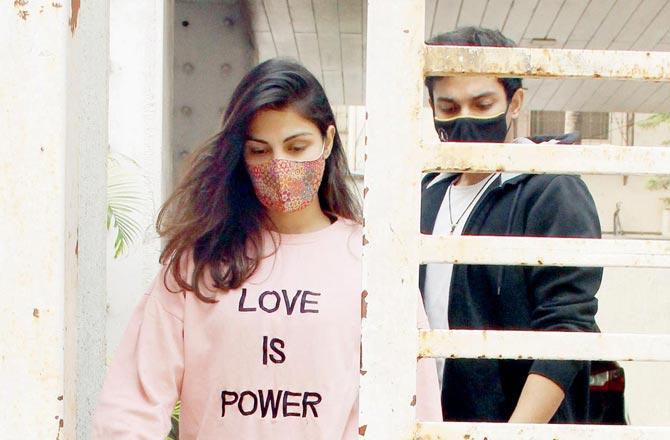 On Sunday, Rhea Chakraborty and brother Showik were seen househunting in Bandra. The two were spotted in public for the first time since their release from jail. After wearing a statement T-shirt, which read, ‘Roses are red, violets are blue, let’s smash the patriarchy, me and you’, in September while at the Narcotics Control Bureau office, this time around the actor wore another statement T-shirt, which read, ‘Love is power’.

Last week, their parents, Indrajit and Sandhya, checked out some apartments in Bandra and Khar. Looks like the Chakrabortys are keen to move out of their Juhu Tara Road home and start afresh at a new address.

Rhea had been in jail for nearly a month on drugs-related charges linked to the Sushant Singh Rajput death case investigation. Rhea was arrested by the NCB on September 9 in a drug case linked to her boyfriend, actor Sushant’s death. The actress was granted bail on October 7, 2020. Her brother Showik continued to remain under custody for a longer period. He was granted bail on December 2.

Rhea Chakraborty’s lawyer Satish Maneshinde shared, “We are delighted by the order of the Bombay High Court granting bail to Rhea Chakraborty. Truth and justice have prevailed and ultimately the submissions on facts and law have been accepted by Justice Sarang V Kotwal.”

On the work front, Rhea was last seen in Jalebi. The actress was said to be a part of Rumi Jaffery’s Chehre, along with Emraan Hashmi, Amitabh Bachchan, Krystle D’Souza, Siddhanth Kapoor, but the release has been delayed.