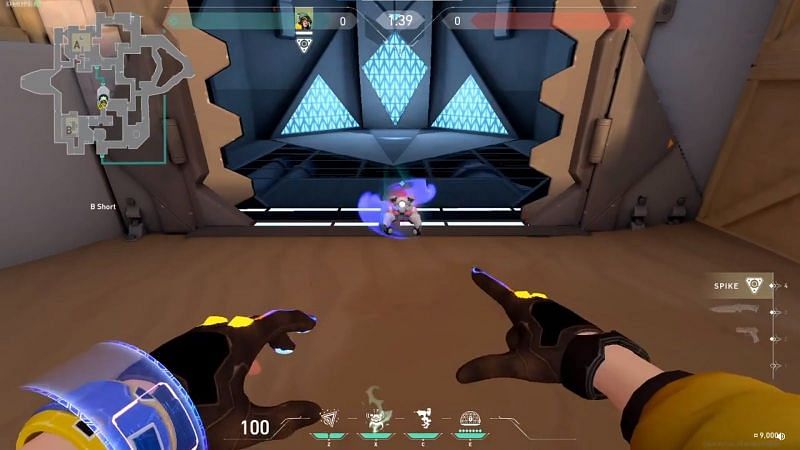 Valorant players are still coming up with new Killjoy exploits to abuse even after four months from her release.

Ever since she hit the live servers with patch 1.05, Killjoy allowed players to exploit the various bugs that her gadgets came with.

Her Turret was breaking the competitive integrity of the game in more ways than one, and it took the Valorant devs a bit of time before they were able to fix it.

However, post-patch 2.00, another exploit surfaced, where Valorant players are now using her Alarmbot to open the Bind teleporter doors from the outside.

In a recent Reddit post, a Valorant player who goes by the handle of marckooooo showed how the exploit works and how ridiculously broken it can be in certain situations.

How to abuse the Killjoy Alarmbot exploit in Valorant’s Bind

In the video, the Redditor showed that to activate the Killjoy exploit on Valorant’s Bind, the player will need to place the Alarmbot in a particular location of the teleporter door.

If the bot is placed anywhere else, the door will not open, and the process will need to be repeated.

The reason why this exploit gives such an incredible advantage to the Killjoy player is that it allows her to enter the teleporter and hold the position.

In Valorant’s Bind, the teleporter door can only be opened from the inside, and it’s particularly used for cross-map play and to close distances quickly.

Killjoy being able to open the door will drastically increase the number of plays that can be done around the teleporter.

With proper team synergy and coordination, the Alarmbot’s unique interaction with the teleporter can help bamboozle the enemies.

Moreover, this is not the first time that an Agent’s Radianite weapon was able to have a unique interaction with Bind’s teleporter door.

Cypher and Skye were also able to open it from the outside; however, their exploits were eventually patched out, and perhaps it will be the case for Killjoy as well.

Valorant Killjoy mains are recommended to abuse this exploit to their heart’s content before Riot decides to patch it out or hotfix it.