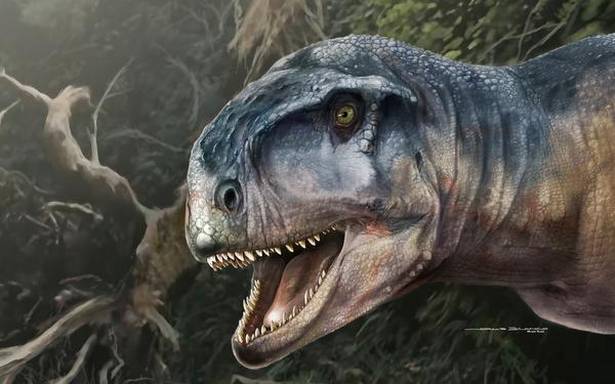 Llukalkan had a powerful bite, based on the musculature of its jaws, and its teeth could tear flesh from its prey

Scientists in Argentina have unearthed the well-preserved skull of a meat-eating dinosaur that roamed northern Patagonia about 85 million years ago — a beast with a short snout, keen hearing and stout bite strength that made it a daunting predator.

The dinosaur, named Llukalkan aliocranianus, measured roughly 16 feet (5 meters) long and was a member of a carnivorous group called abelisaurids that prospered in South America and other parts of Earth’s Southern Hemisphere during the Cretaceous Period, researchers said on Tuesday.

Llukalkan, meaning “one who causes fear” in the local native Mapuche language, may have competed directly against a cousin that was equally impressive and slightly larger. Only about 700 meters away from where Llukalkan’s fossilized skull was found, scientists previously had dug up the remains of another meat-eating dinosaur called Viavenator exxoni.

Both were abelisaurids, a group of two-legged predators with short skulls, sharp and serrated teeth, extremely short arms with tiny fingers and heads sometimes featuring unusual ridges and small horns. Abelisaurids generally were medium-sized compared to huge carnivorous dinosaurs such as Tyrannosaurus rex, which lived in North America approximately 15 million years after Llukalkan, and Giganotosaurus, which lived in Patagonia about 15 million years before Llukalkan.

“Yes, it is very unusual to find two abelisaurids that lived in the same locality and at approximately the same time,” said paleontologist Federico Gianechini of Argentina’s National Scientific and Technical Research Council (CONICET) and the National University of San Luis, lead author of the study published in the Journal of Vertebrate Paleontology.

“Llukalkan was a little smaller than Viavenator, although, if they lived together, they surely shared the same ecological niche and fed on the same prey, so they would have competed with each other and — why not — even eaten each other,” Gianechini added. “Today, predators of different species but from the same family co-exist in the same ecosystem, such as lions, leopards and cheetahs.”

Llukalkan’s skull measured about 50 cm long. A large percentage of the cranial bones were found, including a nicely preserved braincase.

“A peculiarity of this dinosaur is that it has cavities in the ear area that other abelisaurids did not have, which could have given this species different auditory capacities, possibly a greater hearing range,” Gianechini said. “The good preservation allowed us to make studies of the internal part of the braincase through tomography and thus infer the shape of the brain.”

Llukalkan had a powerful bite, based on the musculature of its jaws, and its teeth could tear flesh from its prey. Unlike some abelisaurids, its skull was not bumpy.

No bones from the rest of its body were found, though the researchers have a good idea of its body plan based on other abelisaurids. They estimate Llukalkan weighed between one and five tons.

Patagonia has produced important dinosaur finds in recent decades. Llukalkan’s discovery allows for a deeper understanding of northern Patagonia’s ecosystems during the Cretaceous, the final chapter of the dinosaur age. Llukalkan inhabited a semi-arid environment with a seasonal climate, hunting a variety of plant-eating dinosaurs.