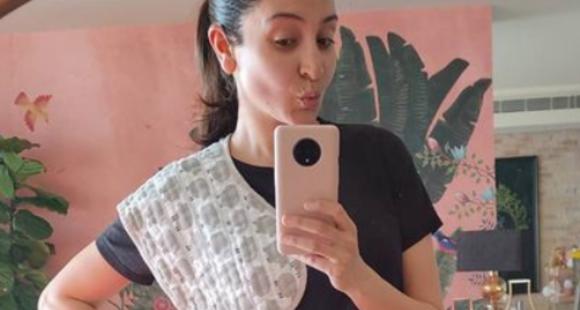 Anushka Sharma has shared a picture with her daughter’s cloth and fans are in awe. She has called it the favourite accessory. She was last seen in the film Zero.

Cricketer Virat Kohli and Anushka Sharma have recently welcomed their first daughter Vamika. Right from fans to celebrities all wished the new parents. Virat and Anushka had recently announced their daughter’s name and also shared a picture of her. The actress is currently very busy with their daughter as it is very much visible from her today’s picture. Anushka has shared a picture of her with Vamika’s cloth and fans just can’t keep themselves calm. The most catching is the caption of the picture.

Anushka is seen standing in front of the mirror posing with Vamika’s burp cloth. She has captioned it as ‘Current favourite accessory – Burp cloth.” Vamika will turn one month old on February 11. Introducing their daughter, Anushka had written, “We have lived together with love, presence and gratitude as a way of life but this little one , Vamika has taken it to a whole new level ! Tears, laughter , worry , bliss – emotions that have been experienced in a span of minutes sometimes ! Sleep is elusive but our hearts are SO full. Thanking you all for your wishes, prayers and good energy.”

Meanwhile, Anushka looked stunning in black athleisure as she is seen making pout in the mirror selfie. The picture also gives us a glimpse of her beautiful home.

After dating for years, Virat and Anushka got married in a private ceremony in Tuscany, Italy in the year 2017. They had announced their pregnancy in August last year.

Also Read: Virat Kohli on becoming a dad, welcoming a daughter with Anushka Sharma: It is the greatest moment in my life