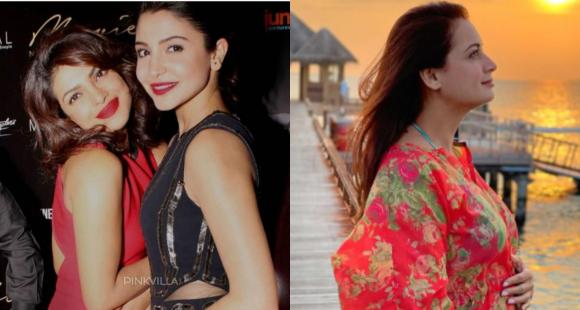 Dia Mirza is expecting her first child with her husband Vaibhav Rekhi and she announced it on Thursday in a post. Anushka Sharma and Priyanka Chopra Jonas showered love on the expectant mother in the comments.

Dia Mirza, who tied the knot back in February 2021 with Mumbai-based businessman Vaibhav Rekhi, is expecting her first child. The Thappad actress announced the news on Thursday in a post where she was seen flaunting her baby bump. Since then, wishes have been pouring in for the expectant mommy and joining them are Anushka Sharma and Priyanka Chopra Jonas. Anushka, who welcomed her first child back in January 2021 with Virat Kohli, sent love to Dia on her post.

The Pari actress dropped a heart emoticon in the comment section of Dia”s post and expressed love for the actress. On the other hand, Priyanka also showered good wishes on Dia and Vaibhav. The global star was excited about learning about the news and she penned a sweet wish for the Thappad actress and sent her love in the comment section. Priyanka wrote, “Omgeeeeeee Congratulations Deee!!” Not just Priyanka and Anushka, many other celebs showered love on Dia and Vaibhav as the photo went viral.

Dia had shared a photo in which she was seen cradling her baby bump. With it, she penned a sweet poem. She wrote, “Blessed to be…One with Mother Earth…One with the Life Force that is the beginning of everything…Of all stories. Lullabies. Songs.Of new saplings.And the blossoming of hope. Blessed to cradle this purest of all dreams in my womb.” Meanwhile, Anushka has recently resumed work after her maternity break. The actress had been spending time with her newborn daughter since January 2021. Reportedly, Anushka resumed work 2 months ahead of her scheduled date in May. Her photos from the sets went viral. On the other hand, Priyanka is currently in the UK as she is busy with the shoot of her series, Citadel with Richard Madden.

Also Read|Dia Mirza announces pregnancy with a pic by Vaibhav: Blessed to cradle this purest of all dreams in my womb