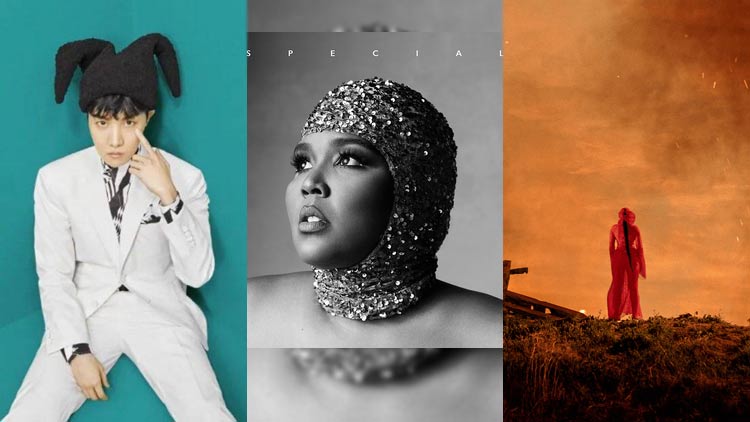 Hey there, I’m back, back again with bangers lined up to be released tomorrow. It’s been a while, but I’ll make sure you don’t feel like it has. This weekend has quite a few popular artists putting out albums of various genres. I wouldn’t let it slide without talking about them, would I? Well, you already know the drill.

Let’s go ahead and get started already.

This album has been trending since its release date was announced, and the world is probably not ready for it yet, including me. The music video teaser for another song from the album called “Arson” was released earlier, and I personally cannot wait for the album’s release. Armys, specifically, are head over heels for how beautiful J-Hope has looked throughout the concept photos for the album, and its single releases.

J-Hope also shared that his favorite track out of the album is Safety Zone, the anticipation just keeps on increasing.

Special is Lizzo’s fourth studio album which is set to make its release tomorrow. Its lead single that I’m pretty sure everyone is aware of, “About damn time”, has already been released long back and has been trending all over Instagram reels and TikTok with its fun dance challenge alongside.

Lizzo, for those who might not know her shockingly, is an American singer and rapper that took off with her first hit song “Truth Hurts” and hasn’t disappointed ever since. I’m pretty sure you have heard this song before, if not let me remind you. It goes along the lines, “ I just took a DNA test, turns out I’m a 100%…” well, now you know. The sound is still trending ever since it has been released.

The track list of this album consists of total 12 songs plus one as a bonus for those who use Apple Music, and they are as follows: The Sign, About Damn Time, Grrls, 2 Be Loved (Am I Ready), I Love You B*tch, Special, Break Up Twice, Everybody’s Gay, Naked, Birthday Girl, If You Love Me, Coldplay and the bonus track called “A Very Special Message From Lizzo”.

3. The Hardest Part by Noah Cyrus

I’m not sure if you all might be aware of this lovely artist, but if not let me tell you my absolute favorites from her. You may go ahead, give a listen to those and be the judge. – “July” and “Stay Together”. Play them in the background, while you read about her new album on here.

This album’s singles have already been released if you might want to check them out- “I Burned LA Down”, “Mr. Percocet”, and “Ready to Go”. The album is filled with overflowing emotions, soul, and honesty. You can feel how sincere and personal all the experiences and feelings are via the songs Noah has written.

The track list consists of the songs: Noah (Stand Still), Ready to Go, Mr. Percocet, Every Beginning Ends Ft. Benjamin Gibbard, Hardest Part, I Just Want a Lover, Unfinished, My Side of the Bed, I Burned LA Down, and Loretta’s Song.

That’s all I have for you today. Hoping you give these wonderful artists, albums, and songs a chance to grow on you. Have fun exploring and finding your (hopefully) new favorite!