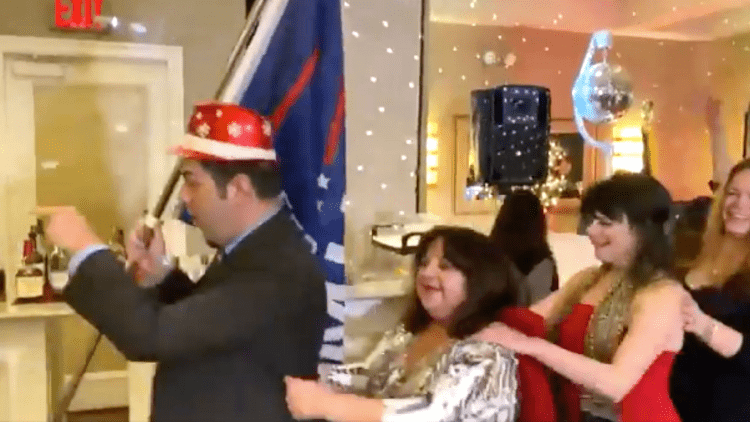 Members of a local Republican party in Queens, New York hit the dance floor at an indoor holiday party earlier this month amid a raging pandemic, viral footage shows.

Participants also failed to wear masks or social distance at the event.

According to The New York Times, the Whitestone Republican Club held the party on Dec. 9 at an Italian restaurant called Il Bacco. Video of the revelry was circulated on social media this week, prompting backlash and condemnation from New York Gov. Andrew Cuomo (D).

“I saw the video. COVID conga lines are not smart. That’s my official position,” Cuomo said at a press briefing on Tuesday. “Why you would do an unmasked conga line in the middle of a pandemic?”

the Whitestone Republican Club in NYC apparently held a Christmas party this year without a care in the world about COVID pic.twitter.com/mHzW86d9M7

City council candidate Vickie Paladino was among the attendees. She can be seen dancing in the footage along with more than a dozen others. The line was led by James Martinosky, a former Republican candidate for the New York State Assembly who carried a Trump 2020 flag.

The Whitestone Republican Club characterized the outrage over the mid-pandemic party as “freaking out” from the media. In the second of two statements on Facebook Tuesday, the group claimed it “abided by all precautions.”

“But we are not the mask police, nor are we the social distancing police. Adults have the absolute right to make their own decisions and clearly many chose to interact like normal humans and not paranoid zombies in hazmat suits,” the statement added.

City Hall officials said there will be consequences for putting New Yorkers at risk.

“There will be significant fines for this incident and we’re looking at both the group that held the event and the establishment that hosted it,” Mitch Schwartz, a spokesman for the mayor, told the Times.

“That party was absolutely not in violation. We did exactly as we were told,” Tina Maria Oppedisano told the Queens Daily Eagle. “Every single person that walked into the business was checked in and given a temperature check.”

The event was held days before Cuomo shuttered indoor dining to stem the spread of COVID-19, which is surging in the state and around the country. New Yorkers must also wear face coverings in public and maintain social distancing.

The Whitestone Republican Club bash was just the latest in a string of political events that have snagged headlines for risky pandemic behavior. In November, Democrats in Brooklyn were slammed for hosting a mostly maskless birthday party at a private Brooklyn residence. And earlier this month, a young Republicans club hosted its annual gala in person in New Jersey.