The series had won a Peabody Award, the first ever for a podcast produced by the newspaper, but within hours administrators said The New York Times would return the award 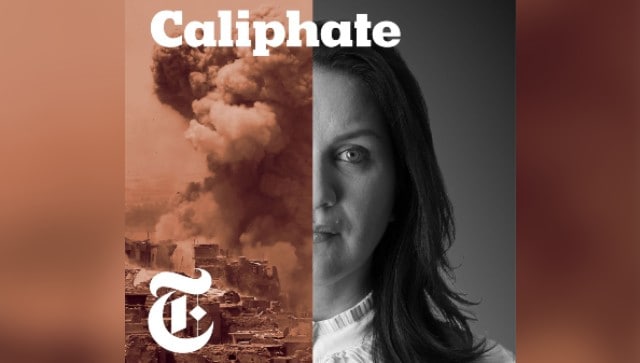 A screenshot of the artwork of the Caliphate podcast. Image courtesy: NYT

New York: The New York Times admitted Friday that it could not verify the claims of a Canadian man whose account of committing atrocities for the Islamic State in Syria was a central part of its 2018 podcast “Caliphate”.

The series had won a Peabody Award, the first ever for a podcast produced by the newspaper, but within hours administrators said The New York Times would return the award. The Overseas Press Club of America said it was rescinding its honor for Caliphate.

With a major hole blown in the narrative, The New York Times affixed an audio correction to the beginning of each part of the 12-part podcast and published an investigation into what went wrong with the story in Friday’s newspaper. The story’s central reporter, Rukmini Callimachi, will be reassigned off the terrorism beat, The New York Times said.

Dean Baquet, the paper’s executive editor, said in a podcast distributed Friday that “this failing wasn’t about any one reporter. I think this was an institutional failing”.

The New York Times assigned an investigative team to look into the story after Canadian police in September arrested Shehroze Chaudhry, who used the alias Abu Huzayfah, for perpetrating a terrorist hoax. He told The New York Times that as an Islamic State soldier, he had shot one man in the head and stabbed another in the heart.

Chaudhry’s story fell apart upon further examination. Investigators concluded they couldn’t be sure he’d ever been in Syria and almost certainly didn’t commit the atrocities he’d claimed. Supposed evidence he offered to back up his story, including photos from Syria, were gathered from other sources.

The New York Times concluded he was a “fabulist” who concocted stories as an escape from his mundane life in a Toronto suburb or living with grandparents in Pakistan.

“All the evidence that he presented that he went to Syria was either ripped from somewhere else, was inconclusive or just didn’t hold up,” Mark Mazzetti, who led The New York Times‘ investigative team on Chaudhry, said in the podcast. “We found a lot of misrepresentations by him, and nothing that independently corroborated his claims of being an Islamic State executioner inside Syria.”

Chaudhry’s lawyer, Nader Hasan, would not comment on The New York Times’ story. He said Chaudhry was not guilty of the Canadian charges and will “vigorously defend himself”.

The New York Times had ample reason to be suspicious of Chaudhry’s account, since an episode of “Caliphate” was devoted to discrepancies in his story and its own fact-checking. But Baquet likened it to confirmation bias, of wanting to believe what seemed like a great story.

“This is one of those cases where I think we just didn’t listen hard enough to the stuff that challenged the story or to the signs that the story wasn’t as strong as we thought it was,” he said.

Callimachi said Friday that it was “gutting” to let down her colleagues. She said she should have caught more of the “lies” Chaudhry told her, and tried to make clear what the newspaper did and didn’t know.

“It wasn’t enough,” she said in a statement. “To our listeners, I apologise for what we missed and what we got wrong. We are correcting the record and I commit to doing better in the future.”

Callimachi worked at The Associated Press from 2003 to 2014. The news organisation said Friday that her reporting on terrorism “went through a rigorous editing process at all stages of the reporting and prior to publication. We stand by the stories”.

As a result of an investigation into her work, The New York Times attached editor’s notes correcting some of the details in two other stories under her byline. In a 2014 story about a Syrian journalist who claimed he saw American hostages being held in a former factory in Syria, The New York Times notes that the source had given inconsistent stories to others.

The New York Times also called into question the documents that were the basis for a 2019 story that Islamic State leader Abu Bakr al-Baghdadi had been hidden at the base of a rival group because he had paid protection money.

The brother of murdered American journalist James Foley had in the past called into question details of a Callimachi story about her brother, but The New York Times backed her work.

Baquet noted the difficulty of covering terrorism and faulted himself and top deputies for not paying closer attention to “Caliphate“. In contrast, he said he looked at so many versions of the newspaper’s investigation into President Donald Trump’s finances that “I could almost do Trump’s taxes at this point.”

“I didn’t personally pay enough attention to this one,” he said.

The episode raises questions about whether The New York Times applies the same journalistic rigor to stories done by its audio unit as it does for print pieces. The New York Times moved more aggressively into audio about four years ago and produces The Daily, one of the most successful podcasts on the market.

In an interview with NPR, Baquet said editors accustomed to print pieces were deferential to an ambitious audio team presenting a compelling narrative yarn.

That angered Madhulika Sikka, a former top NPR executive who was also audio executive producer at The Washington Post before getting into publishing. She tweeted that if audio products operated under different rules than the rest of the newsroom, the problem is with the newsroom, not the platform.

“If this had been a print story, would there have been different rules applied?” Sikka said in an interview. “I don’t know. It was the implication in Dean Baquet’s quote that I found objectionable.”