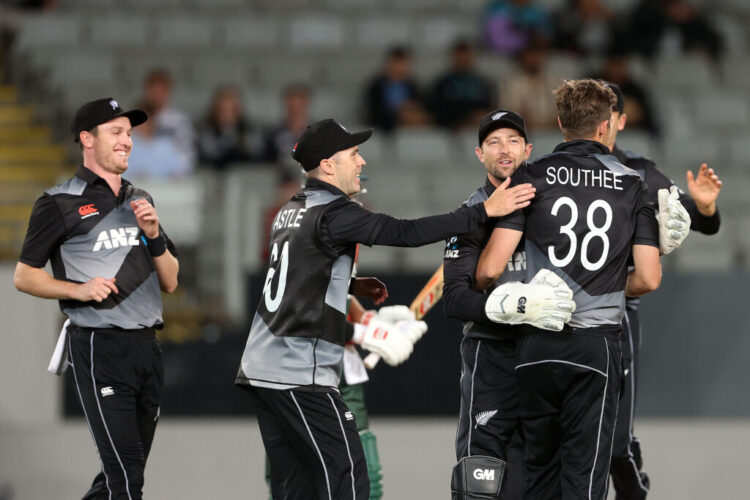 In the rain-curtailed last game of the three-match T20I series, the hosts New Zealand claimed another big victory by 65 runs against the visitors Bangladesh at Eden Park (Auckland). With this victory, the hosts Blackcaps won this T20I series by a 3-0 margin.

Due to raining and wet ground, the match was forced to get delayed and it finally started more than two hours later than the scheduled time as it became the 10-over game. After Bangladesh stand-in captain Liton Das chose to field first, New Zealand scored 141/4 (10 overs). Later, the visitors were bundled out for just 76 runs.

2nd innings (Bangladesh): Visiting batsmen failed to fight back while Todd Astle and Tim Southee dominated with the ball

The poor scene of Bangladesh batting continued in this last game of this tour as none of their batsmen managed to reach the 20-run mark in that innings.

Openers Martin Guptill and Finn Allen provided the fiery start as they first put up 43 runs at the end of the 3-over powerplay. They continued that opening partnership for 5.4 overs where their partnership managed to put 85 runs on the scoreboard. Mahedi Hasan took the first wicket of the match as he dismissed Guptill for 44 runs off just 19 balls (only four and 5 sixes).

However, Finn Allen continued his smashing batting as he completed his maiden international fifty in just 18 balls. Before losing his wicket in the 9.4 overs, Allen scored 71 off just 29 balls with the help of 10 fours and 3 sixes. Also, Glenn Phillips and Daryl Mitchell scored 14 and 11 runs respectively while both faced six balls each.