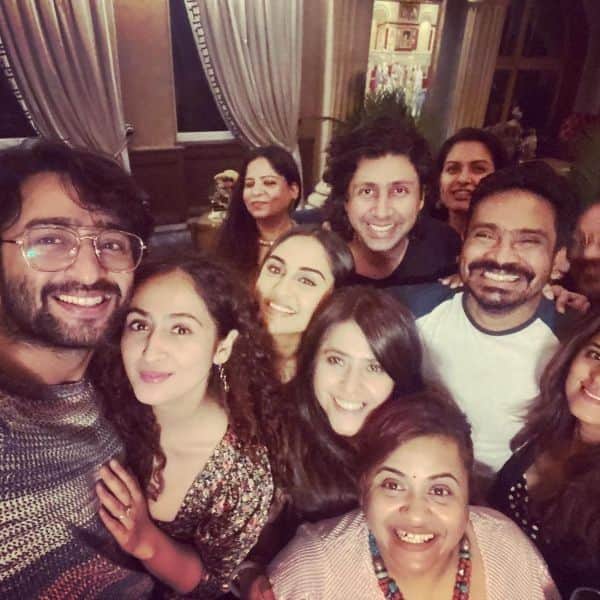 Shaheer Sheikh and Ruchikaa Kapoor partied the night away with Ekta Kapoor and various other celebrities from the world of entertainment. TV Czarina Ekta Kapoor took to her social media handle and shared a couple of pictures on her gram giving us a glimpse of their cozy party. At the party, we can see television beauties such as Krystle Dsouza, Ridhi Dogra to name a few. We also see Akshay Dogra and his wife, Sakshi Talwar. There are a lot of people in the picture and are happily posing for the camera. The other two pictures are selfies clicked by none other than Shahaeer Sheikh. In the third picture, we can see Ruchikaa leaning on Shaheer and everybody else posed away. RucHeer as their fans love to call them, were the focus of the pictures. Ekta Kapoor shared the pictures on her handle. Check it out below: Also Read – Yeh Rishtey Hain Pyaar Ke’s Avinash Mishra REACTS to dating rumours with Kavveri Priiyam; says, ‘It’s sad that people make these claims’

Earlier, Shaheer Sheikh had opened up on his wedding with Ruchikaa Kapoor with Bombay Times. “Ruchikaa is honest when it comes to her feelings. The best part about our relationship is that we are friends first. Being an actor, I have to pretend in front of the camera all the time, but I have found a partner with whom I get to be myself. I’ve always said that I’m a ‘wanderer’ and I’ve finally found the right companion. I am looking forward to my never-ending travels with her,” he had said. Also Read – Yeh Rishta Kya Kehlata Hai’s Mohsin Khan buys a new house; Shaheer Sheikh, Rajan Shahi, Ashnoor Kaur and others congratulate him

In an interview with Pinkvilla, Shaheer had opened up when he understood that Ruchikaa Kapoor was the one for him. Elaborating, Shaheer Sheikh revealed how he is driven by his emotions and Ruchikaa Kapoor understood. “People who know me, know the kind of person I am. For the world, I’m this person who keeps to himself and keeps quiet and someone who doesn’t really express. But people who know me, who are good friends, know I am a mad man. I am a person driven by my emotions so I go crazy sometimes. So I can be that in front of her, I can be myself. During those trips, I realised, ‘Yes, this is it.’ It felt perfect,” the Paurashpur actor added.