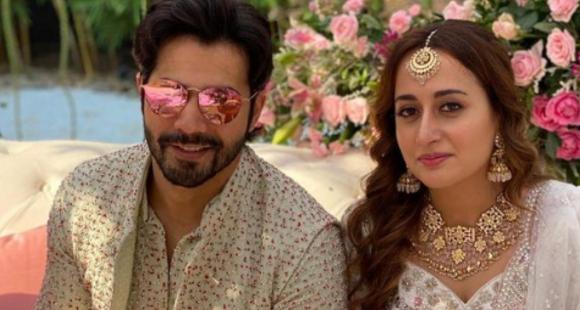 Newswrap, January 25: Right from the latest update on Varun Dhawan and Natasha Dalal’s reception wedding to Shahid Kapoor welcoming Raashi Khanna for coming on board for Raj & DK’s show, here are the key stories from the previous day.

Anil Dhawan has rubbished the reports of the newlyweds Varun Dhawan and Natasha Dalal hosting a reception on February 2. Talking to Pinkvilla, he said as of now nothing is happening as everybody is busy with their respective things.

The upcoming magnum opus RRR starring Ram Charan, Jr NTR, Ajay Devgn, Alia Bhatt among others has got a release date. Helmed by SS Rajamouli, the movie will hit the theatres on October 13 this year.

After sharing breathtaking wedding pictures, Haldi and Sangeet pics, Varun Dhawan has now given us a glimpse of his Mehendi ceremony. The Coolie No 1 actor has shared a series of inside pictures with his ladylove Natasha Dalal on his Instagram handle.

Babil Khan often shares unseen pictures of his late father and actor Irrfan Khan on his social media handles. Now, in a recent interview, the actor has expressed his desire to follow in his father’s footsteps and want to take his legacy forward.

Also Read: Babil Khan reveals his plans on taking his late father Irrfan’s legacy forward: Have to do it the right way

Shahid Kapoor and Raashi Khanna have teamed up for Raj & DK’s upcoming OTT project. Recently, the Jab We Met star has shared a selfie with the stunning actress while welcoming her on board.

Also Read: Shahid Kapoor hides behind Raashi Khanna as he welcomes her to Raj & DK’s series; She responds with a query

Parineeti Chopra on The Girl On The Train

In an exclusive conversation with Pinkvilla, the Ishaqzaade star talked about her upcoming film The Girl On The Train that is the official adaptation of Emily Blunt’s Hollywood flick of the same. She said she is both excited and nervous hopes that the audience gives the same love to the trailer as they have given to its teaser.

Also Read:EXCLUSIVE: Parineeti Chopra is excited, nervous as The Girl On The Train is voted as most awaited film on IMDb