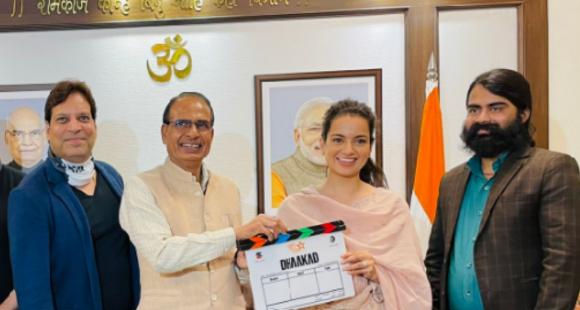 Newswrap, January 9: Right from Deepika Padukone sharing an unseen photo with Ranveer Singh to Salman Khan lending his voice for a pensive poem in Pankaj Tripathi starrer Kaagaz; here are the key stories from the previous day.

The Thalaivi star is currently in Bhopal for the shoot of her upcoming action film Dhaakad. Recently, the actress along with the film’s other cast has met Madhya Pradesh Chief Minister Shivraj Singh Chouhan. Later, Kangana took to her Twitter handle and shared pictures from it.

The actress recently had a Q &A session with her fans on her Instagram. During this, Deepika has shared a stunning unseen picture with Ranveer Singh from her birthday bash, leaving everyone in awe of the couple.

Also Read:Deepika Padukone posts UNSEEN photo with Ranveer Singh from her birthday bash and says he finished her cake

First time ever the Dabangg Khan has narrated a poem. Salman has lent his voice for a poem in Pankaj Tripathi’s recently released film Kaagaz. The movie has been directed by Satish Kaushik who is also playing the role of a lawyer in it.

The Simmba star shelled out major fitness goals for everyone as he shared his picture from the gym wherein he flaunted his toned and ripped muscles. Needless to say, the actor’s picture has left everyone in awe of his dapper looks.

Also Read: Ranveer Singh shells out weekend fitspiration as he flaunts his ripped muscles in a gym selfie; Take a look

The Heropanti actress is currently in Jaisalmer, Rajasthan shooting for her upcoming film Bachchan Pandey with Akshay Kumar. The diva has been sharing a glimpse of it on social media. Recently, she shared a video wherein Kriti Sanon is seen walking with her makeup artist and team members while giving us a sneak peek into it.