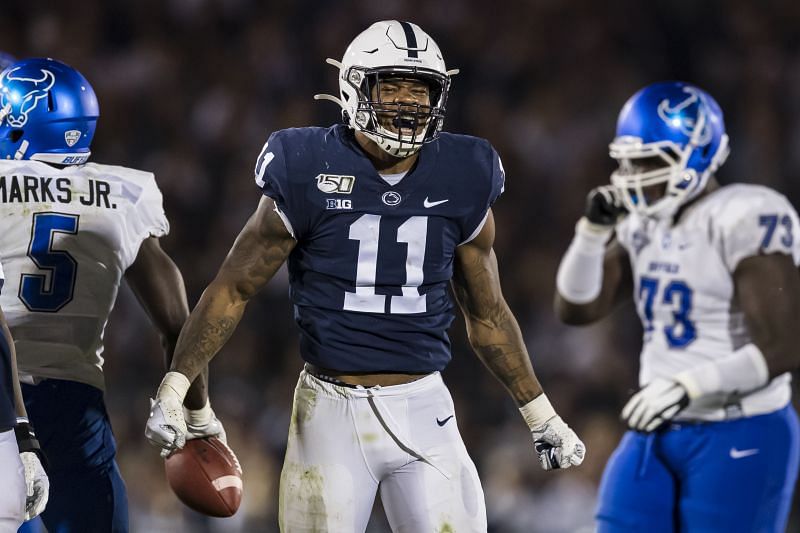 Former Penn State Nittany Lions linebacker Micah Parsons is one of the college athletes that opted out of the 2020 college football season. Parsons opt out could have been the most impactful out of all the players. Micah Parsons was not only the best defensive player on the Penn State team but he was the best player.

In two years playing for Penn State, Micah Parsons put up numbers that some players do not put up in four years in college. In his sophomore season he would rack up 109 total tackles for the Penn State defense. Parsons would be a difference maker for Penn State and their defense struggled in his absence.

Even with sitting out the 2020 college football season, Micah Parsons is still projected to go within the first ten picks of the 2021 NFL Draft. Parsons has been on a lot of NFL draft boards since he opted out. NFL teams have watched the tape and see tremendous athletic ability for a athlete of his size.

NFL Draft Rumors: Which two teams could Micah Parsons suit up for in 2021

Philadelphia Eagles are sitting at number five and have a primary need of a linebacker. With the Miami Dolphins picking at number four it is unlikely that they select Parsons. The Dolphins will most likely take either Ja’Marr Chase or Devonta Smith at number four.

This leaves Micah Parsons free to be selected by the Eagles at five. Parsons is a generational talent at the linebacker position. He has the skill set to play either middle or outside linebacker. His size separates him from most of the linebackers in the draft.

Micah Parsons has the ability to stuff the run, pressure the quarterback, and drop back into coverage. He possesses great closing speed and pursues the football extremely well. Philadelphia would be making a huge mistake if they pass on Micah Parsons at number five.

Carolina Panthers have the eighth pick in the 2021 NFL Draft. There primary need for a linebacker is higher than the Eagles. If the Eagles let Parsons slip away then he will not get past the Panthers at eight.

Carolina has been searching for a replacement for Luke Kuechly since he retired early. Micah Parsons has the ability to fill Kuechly’s shoes and some. His size and explosiveness is what reminds the Panthers of their former middle linebacker.

Micah Parsons’ abilities will make him a day one starter on the defensive side of the football for the Carolina Panthers. The freakish athletic ability he possesses is what makes him stand out the most when watching film. It would be extremely shocking if Parsons falls past the Carolina Panthers at number eight.

NFL Draft Rumors: Where does Micah Parsons land in the 2021 NFL Draft