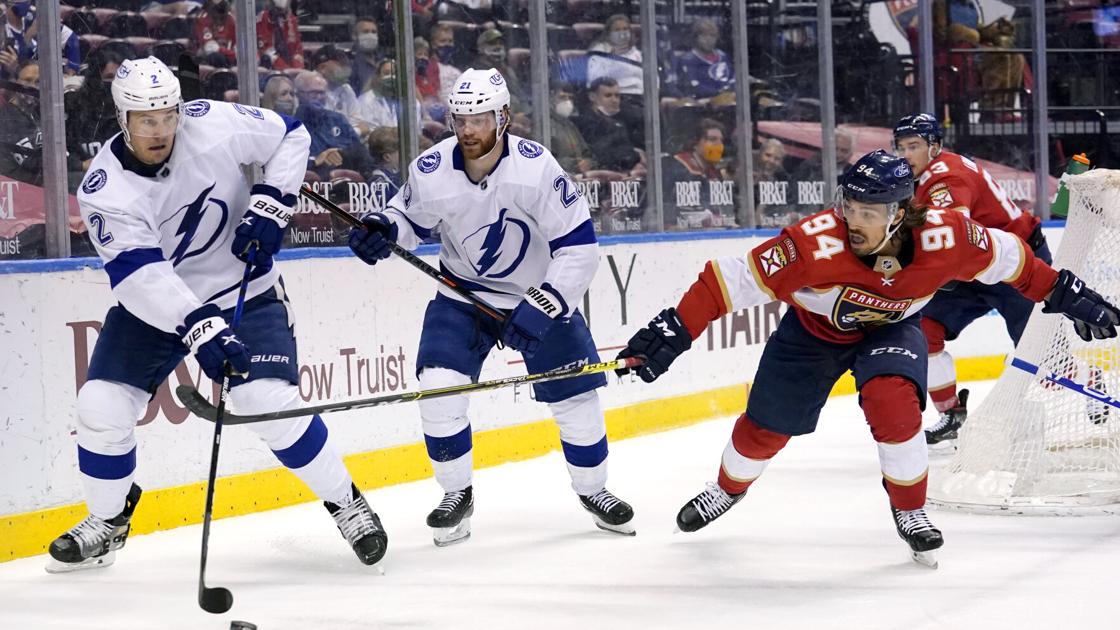 There will be no mysteries when Tampa Bay and Florida meet in the first round of the playoffs after facing off eight times this season and twice in the past week. Same deal for Montreal and Toronto, who have played 10 times since mid-January.

“I don’t want to say it takes kind of some of the fun out it, but it does because you know a lot more what to expect,” Lightning coach Jon Cooper said.

“It’s just another thing about our year that’s incredibly unique,” Vegas general manager Kelly McCrimmon said Friday. “You could see matchups that you would generally only see in a Stanley Cup Final situation, so that’s going to add another layer of uniqueness to an already unique season.”

It’s so unique that by the time Calgary and Vancouver finish their regular seasons, some first-round playoff series will be two games old. A total of 57 games were postponed this season — 51 for virus-related reasons — so the playoffs open a few days later than planned when Washington hosts Boston on Saturday night.

After expanding to 24 teams to complete the 2020 season, the playoff field is back to the traditional 16 with four from each temporarily realigned division. The first two rounds are a return to the divisional playoff format the NHL used from 1982-93, and things should be even spicier after a season of all divisional play.

“There’s really no secrets,” said Carolina’s Rod Brind’Amour, one of six head coaches in the playoffs who played in that old format. “It’s going to be too much going on, both teams trying to do the same things and we’re each in each other’s way, so something’s going to give.”

Cooper thinks Game 1 of each series will better resemble a Game 2 or 3 since teams won’t need any time to get familiar with each other. They’ve had at least eight chances to get acquainted over the past four months.

“Bad blood’s already there, typically if you’ve played a team eight times and both teams are in the playoffs,” Bruins coach Bruce Cassidy said. “Instead of sort of a buildup over time where gradually you get to Game 4 and all of a sudden now the nastiness starts, you’ll just see it sooner. Familiarity will breed contempt quicker.”

Nashville GM David Poile believes that familiarity will also breed better series. The league has tried for years to gin up rivalries, and while these aren’t the circumstances anyone wanted, there’s no love lost in any of the eight first-round matchups.

“There’s been a lot to, I guess, not like about this year, but one of the things is playing these same teams and building up these rivalries,” Poile said. “It’s really, really good, and I think it’s going to make for good hockey.”

There will likely be different styles of hockey across the divisions: Nashville-Carolina and Tampa Bay-Florida in the Central, Boston-Washington and the New York Islanders vs. Pittsburgh in the East, St. Louis-Colorado and Minnesota-Vegas in the West and Montreal-Toronto and Winnipeg-Edmonton in the North. For one, there are still no fans allowed in arenas in Canada, while every arena in the U.S. will have a crowd of at least 4,000 to start the playoffs.

“By this time, I think we’re pretty used to it with no fans,” Winnipeg forward Nate Thompson said. “In the bubble (last summer), every team had to create their own momentum, their own excitement.”

There’s no bubble this time, and the NHL is even relaxing pandemic protocols for each team that has 85% of its traveling party fully vaccinated. Even after he and the Lightning won the Cup in quarantine as bubble hockey champions, Tampa Bay center Yanni Gourde said “it’s a completely different vibe” this year and is excited to get back to sharing the playoffs with family.

“It does feel a lot more normal, or like it used to be in the years past,” Bruins captain Patrice Bergeron said. “Traveling, two games on the road, two games back at home and then 1-1-1, so it’s back to regular playoffs, and kind of looking forward to that.”

Hockey players and coaches know better than to look too far forward. But reseeding the final four provides the potential for cross-continental semifinals and Cup Final matchups that would ordinarily never be possible.

Boston and Toronto could meet for the Cup after several recent first-round series. It could be Washington-Carolina, Edmonton-Vegas or Nashville-St. Louis.

“We’d love to find out,” McCrimmon said. “It’ll be really interesting to see what those games are like, to see how teams are playing, and of course there’s so many things that are going to change between now and then. … Just through the eyes of a hockey fan, that’s going to be really neat to see what happens.”