No Surrender Results – Who Won the Triple Threat Revolver Match? 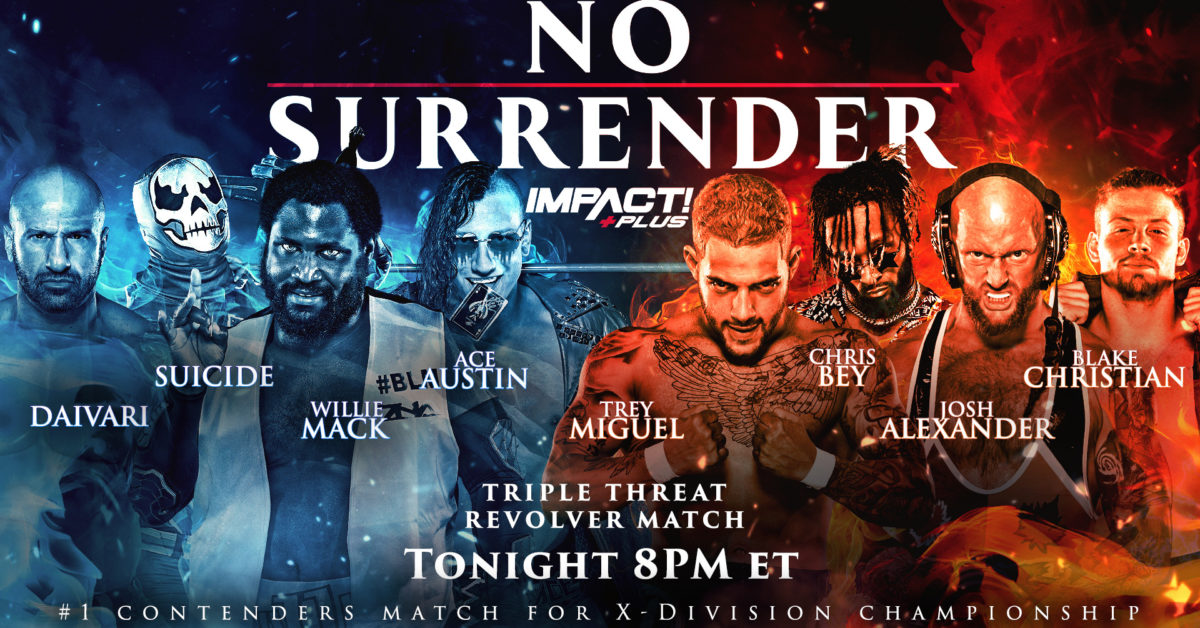 Greetings, comrades! El Presidente is back, continuing Bleeding Cool’s live coverage of Impact Wrestling’s No Surrender special. Joining me tonight as we alternate articles are Jude Terror and Chad McMahon. In his coverage of the last match, Jude asked me where I think Chad’s wife is tonight, since she isn’t at home with Chad. I think it’s obvious, comrades. Chads wife is probably spending Valentine’s Day weekend with that guy Gary who she is always texting with. Sorry, Chad, but you can only ignore your wife in favor of pro wrestling for so long, comrade. You have to keep your priorities straight, my amigo.

One day, El Presidente vows that the capitalist pigs who control the means of production at Bleeding Cool will die like dogs, but until that day comes, comrades, I must play their game and insert this SEO keyword-rich text into my article. But El Presidente shall have his revenge!

Emanating from Skyway Studios in Nashville, Tennessee, No Surrender is the second Impact Plus special of 2021 and features a lineup headlined by an Impact Championship match between champion Rich Swann and Tommy Dreamer. In a crossover with AEW, Impact Tag Team Champions The Good Brothers take on AEW stars Private Party and the team of Chris Sabin and James Storm. TJP faces Rohit Raju for the X-Division Championship. Hernandez and Brian Myers team up to take on Eddie Edwards and Matt Cardona. Daivari, Suicide, Willie Mack, Ace Austin, Trey Miguel, Chris Bey, Josh Alexander, and Blake Christian compete in a Triple Threat Revolver match. Fire N Flava defend the Knockouts Tag Team Championships against Havok and Nevaeh. (The Former Cody) Deaner faces his cousin Jake Something. Deonna Purrazzo, Kimber Lee, and Susan team up against Jordynne Grace, Jazz, and ODB. And Tenille Dashwood joins XXXL to take on Decay.

Eddie and Alisha Edwards give Tommy Dreamer a birthday gift backstage. Then they put over Dreamer and thank him for being there for them in their careers. Alisha gives him a hug. Awww! Such a sweet moment to see these wrestlers be nice to that old man, comrades. Haw haw haw haw!

This match is confusing, comrades. It’s a triple threat, but there’s eight people in it. Suicide, Blake Christian, and Trey Miguel are the first three wrestlers in the match. Suicide is eliminated and replaced by Chris Bey. Christian is eliminated, replaced by Daivari. Daivari is quickly taken out and replaced by Josh Alexander. Alexander makes Bey tap out, to be replaced by Willie Mack. Trey and Josh both pin Willie, and that leaves Ace Austin as the final competitor. Now the match becomes a regular triple threat, with the first man to get a pin winning. That man is Josh Alexander, who pins Ace Austin with a piledriver.

Interesting match, comrades. Basically a gauntlet match, but a triple threat. But not an Impact gauntlet match, which is actually more like a Royal Rumble. The point is it was a fun match,  comrades. Lots of high-flying action and lots of big spots, exactly like a match like this should deliver.

Keep checking back throughout the night for more Impact Wrestling No Surrender coverage, and thanks for reading Bleeding Cool. The Chadster will take over the next match, and I am very interested to hear what he thinks about my theory that his wife is cheating on him with a pretty man named Gary tonight. What do you think, Chad?

Until next time, comrades: socialism or death.

This post is part of a multi-part series: Impact Wrestling No Surrender 2021 Results.