Home News Nod from 6 member-nations in, work on world’s largest radio telescope to begin in 2021

Nod from 6 member-nations in, work on world’s largest radio telescope to begin in 2021 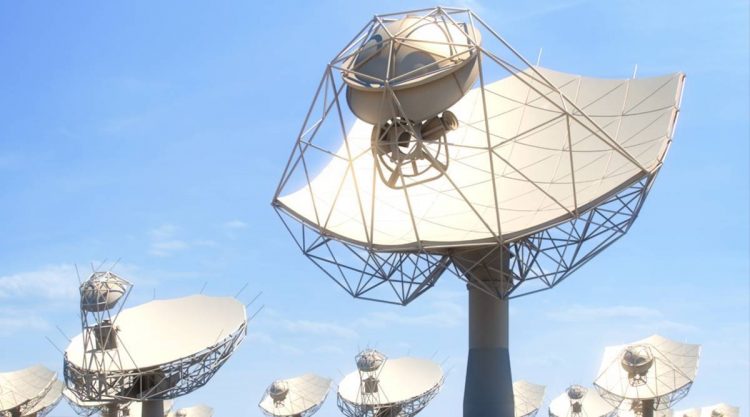 An artist’s impression of the SKA telescope in South Africa. (Photo courtesy: SKAO)

The formal go-ahead for establishing the Square Kilometre Array Observatory (SKAO) has recently been received, after the United Kingdom ratified the international treaty Convention.

Proposed to be the world’s largest radio telescope, SKAO will be built across two continents – Africa and Australia — and have its global headquarters in the UK. SKAO is not a single telescope, but a collection of telescopes known as an array, which would be installed in Australia and South Africa.

This mega science project was awaiting ratification by at least five of its member-countries, including the three host countries – the UK, Australia and South Africa. With the UK becoming the sixth country to ratify the treaty Convention on December 16, an international treaty organisation can now be set up, which will build and run the SKAO over its lifetime of several decades.

Earlier, Australia, South Africa, Italy, The Netherlands and Portugal had given similar approvals to join the new treaty organisation.

The UK joining this league of countries means the project has been officially approved and the construction of the telescope at the two sites can begin.

“The completion of the ratification process by the UK means the SKAO can now enter into being as early as January 2021,” said SKA Director-General Prof Philip Diamond.

Through the Department of Atomic Energy (DAE) as the official representative of the 20-plus scientific institutions, India, too, is involved in this project. However, as a member country, India is yet to complete the final approval and ratification process for joining the construction phase.

Once ready, this observatory could help the scientific community improve its knowledge and seek answers to some of the fundamental and yet poorly-explored aspects of the universe, such as its early history, the evolution of galaxies over cosmic time, fundamental physics in extreme environments and more.

Started in 2014, the SKA design work took six years to be completed, with contributions made by over 1,000 engineers and scientists from across 20 countries.

A team from India played a significant role during this phase, leading the design of the sophisticated Telescope Manager (TM) system of the entire SKA observatory. India has already been chosen as the country to lead the construction of the TM system. Nicknamed the SKA ‘nervous system’, it will be responsible for the complete end-to-end operations of the SKAO.

“With six member-countries having ratified the Convention, now an SKAO Council for the same will be set up. This Council is expected to hold its first meeting (via video- conferencing) sometime in late January or early February of 2021. Once the SKAO Council approves the construction proposal and other related documents, it will pave the way for the commencement of the on-site construction of SKA,” Prof Yashwant Gupta, director of the Pune-based National Centre for Radio Astrophysics (NCRA), which has been spearheading India’s participation in the project, told The Indian Express.

Along with NCRA, some of the major Indian institutes involved in this project are Raman Research Institute, Indian Institute of Science, Inter University Centre for Astronomy and Astrophysics, IITs from Kanpur, Kharagpur and Indore, Tata Institute of Fundamental Research, Presidency College and IISER-Mohali, among others.

Once the Council is established, its rules, regulations and working modalities will be charted out, following which the project proposal will be formally taken up for discussion in view of the actual construction.

However, in order for the on-site construction to begin, more member-countries, including India, will need to join, provide funding and support the project for it to become viable, said Gupta.

India is proposing to participate at a level that is close to 6 per cent of the total SKA budget. This proposal is presently under review by the government.

Similarly, countries like China, Italy, Spain, Germany, France, Canada and others are also at varying stages of getting their governmental approvals for funding and participating in the new treaty organisation. Meanwhile, scientists here have been involved in developing prototypes and identifying areas where the country’s contribution could be made more effective.

The SKAO is scheduled to be built in two phases and the estimated cost for the initial phase is about 1.8 billion Euros, which will be spent over a period of 10 years.

“There are numerous stages for the construction and it will go on for six to seven years, after which it will take another three to four years to make the SKA fully operational for meeting its main scientific objectives,” said Gupta.

Like all activities, the ongoing Covid-19 pandemic has delayed some of the proceedings related to SKAO by at least six months, but “we expect good progress now,” Gupta added.