‘Nomadland,’ ‘The Crown’… and ‘Borat’?! Instant predictions of who’ll win the 2021 Golden Globes 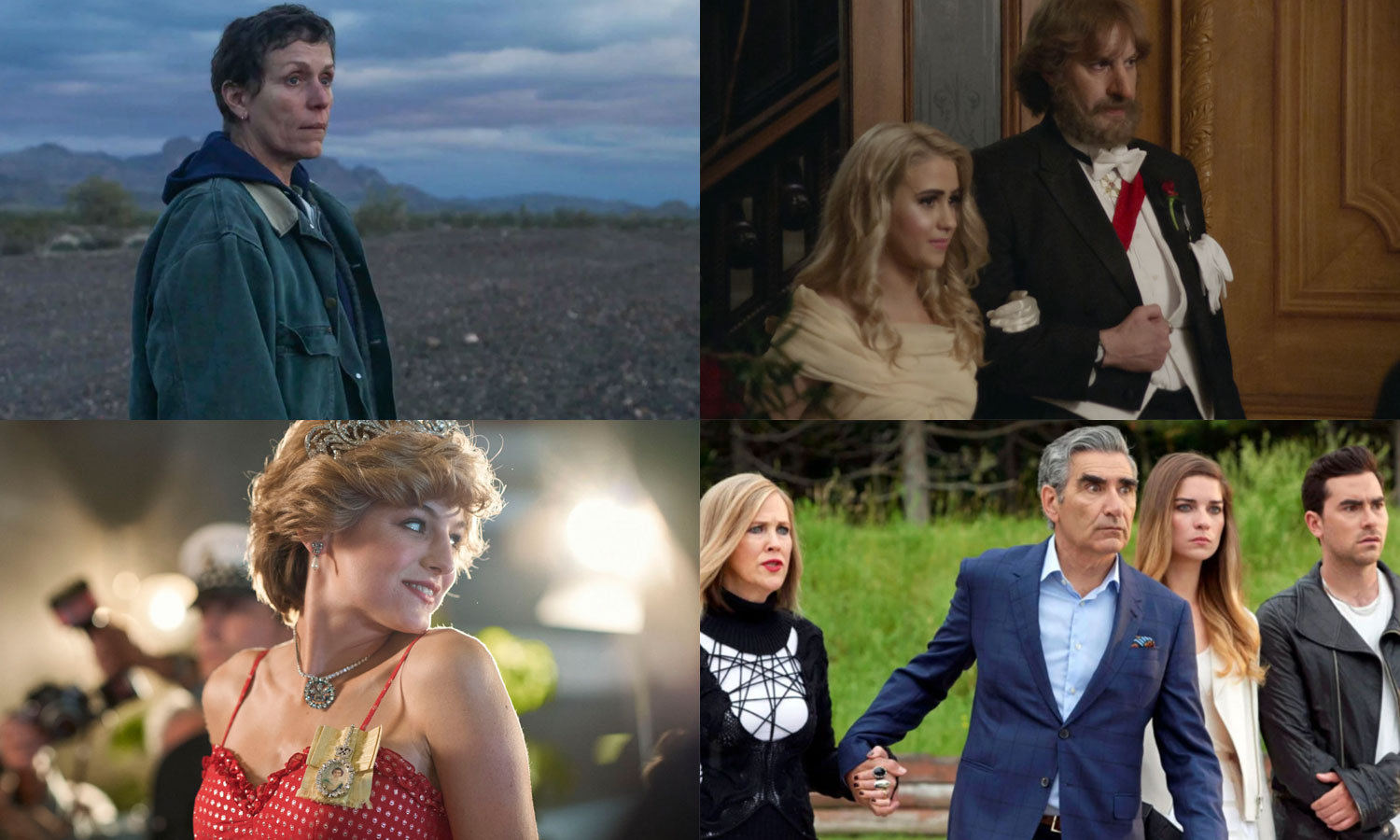 It can be a fool’s errand trying to predict the nominations for the Golden Globes Awards, given the Hollywood Foreign Press Association’s notoriety for head-scratching inclusions (who saw Music, a controversial film directed by Sia that was shot in mid-2017, cracking the top races?) and penchant for nominating late-breaking entries like The Mauritanian and The Little Things that no other voting body has honored. (See our full list of snubs and surprises here.)

But now that the nominations are out, let’s get at it. Netflix’s Mank (six) and The Trial of the Chicago 7 (five) led the way with the most nods among films, while the streamer’s acclaimed series The Crown (six) topped all TV shows. But will that translate into wins come Feb. 28? Not necessarily. Netflix led all studios a year ago with 34 nominations, yet took home only two awards. Will the streaming platform have a more favorable result with its 42 nominations this year? Here are our early picks in all of the major categories.

An unfortunate storyline here is the HFPA’s surprising shutout of Black-themed stories like One Night in Miami and Ma Rainey’s Black Bottom in a year with many great ones to offer (see also: Da 5 Bloods, Judas and the Black Messiah and The United States vs. Billie Holiday). Even so, there would still be one clear favorite: Chloé Zhao’s sensational Nomadland, which tracks a heavy-hearted Frances McDormand across the American West as she lives out of her van.

Nominees:
The Father
Mank
Nomadland
Promising Young Woman
The Trial of the Chicago 7

This grab-gab categories features two comedies (Borat Subsequent Moviefilm, Palm Springs), two musicals (Hamilton, The Prom) and… whatever Music qualifies as — a drama with music video elements? Regardless, this seems like another easy call. The HFPA proved in 2007 they’re big into Borat, nominating the original for both this category and Best Actor (Sacha Baron Cohen, who won). While the film ultimately lost to Dreamgirls, here’s its chance for revenge.

As disheartening as the racial optics are in Best Picture, the Globes are getting proper due for nominating three deserving women in Best Director — the first time there’s ever been more than one female filmmaker in this category. Fincher (who earned his fourth nomination and won once, in 2011, for The Social Network) and Sorkin (an eight-time writing nominee and first-time director nom) could both be threats given their films’ respective nominations, but no film was shot more beautifully and lyrically this year than Zhao’s Nomadland.

We don’t envy any voter, HFPA or otherwise, who has to choose between Viola Davis and Frances McDormand. Both are venerated Oscar winners who deliver absolute master classes — Davis as force of nature Ma Rainey, McDormand as a woman answering nature’s call in Nomadland. Given the HFPA’s clear preference for Nomadland, we’ll settle in Camp McDormand.

Delroy Lindo’s omission here for Da 5 Bloods is an absolute stunner, and Steven Yeun deserves some justice as well for Minari — but congrats to surprise pick Tahar Rahim, who is indeed a revelation in The Mauritanian. While this category packs awards heavyweights like Anthony Hopkins and Gary Oldman, it would be a shock not to see the Globes honor Chadwick Boseman, who not only had an incredible career cut short at the age of 43, but delivered his magnum opus in Ma Rainey.

Meryl Streep (The Prom) snubbed, Kate Hudson included for a film she shot in 2017… Rosamund Pike and Anya Taylor-Joy over Rashida Jones (On the Rocks) and Cristin Milioti (Palm Springs)… This might be the goofiest category of them all. Amazingly, the least surprising nominee is Borat 2 breakout Maria Bakalova, who not only stole countless scenes from Sacha Baron Cohen but lured Rudy Giuliani into what had to be at least one of this three most embarrassing moments of 2020.

Yeah, Film Twitter’s going to need some time to get over the fact that James Corden was nominated for The Prom and Meryl Streep was not. File Corden under “just lucky to be nominated” (really lucky), though, because this one is going to 2007 winner and 2021 double nominee Sacha Baron Cohen. That’s right, Borat 2 is about to get broom out and sweep the comedy categories. (And if he loses? Baron Cohen has pledged to hire Giuliani to challenge the results.)

2013 Cecil B. DeMille honoree Jodie Foster, who works sparingly these days, returns to the show for the first time as a nominee since 2012 when she was nominated for… a film called Carnage? Yeah, we don’t remember that one either. She is somewhat of a surprise here — though clearly the HFPA loves her — along with 12-year-old Helena Zengel. And while a rematch between 2019 awards circuit rivals Glenn Close and Olivia Colman is set, it’s Amanda Seyfried who has quietly emerged as the frontrunner for her soulful turn as Marion Davies in Mank.

Our hearts are still hurting from this morning’s snubbing of Sound of Metal’s Paul Raci, who still figures to be a major Oscar threat and was likely edged out here by Jared Leto’s gaudy murder suspect in The Little Things. At least Raci’s diss makes this race easier to call: This one is very likely coming down to Leslie Odom Jr.’s stirring portrayal of Sam Cooke in One Night in Miami and Daniel Kaluuya’s fiery turn as Black Panther revolutionary Fred Hampton in Judas and the Black Messiah.

Nominees:
Sacha Baron Cohen, The Trial of the Chicago 7
Daniel Kaluuya, Judas and the Black Messiah
Jared Leto, The Little Things
Bill Murray, On the Rocks
Leslie Odom Jr., One Night in Miami

The Force was strong with The Mandalorian, as the Star Wars series followed up its multiple Emmy nominations with a nod for the top drama prize at the Globes. Of course, the show’s odds at winning are lower than Mando’s chances in a lightsaber duel against Luke Skywalker, but at least Baby Yoda is guaranteed to make an appearance on the virtual red carpet. Coming off a buzzy fourth season that introduced Diana Spencer into royal mix, Netflix’s ever-popular The Crown seems set to win the… uh, crown, but don’t completely count out the streaming service’s other binge-worthy hit, Ozark, which is about to head into its final season.

Never mind the queen: hail to the princess! Emma Corrin’s acclaimed performance as the young princess of Wales, Diana Spencer, was the secret ingredient that made the fourth season of The Crown a full-course meal for fans of royal drama. While it’s possible that reigning champ, Olivia Colman, could repeat last year’s victory, it’s hard to ignore Lady Di waiting in the wings — especially since Corrin won’t be back next year: Elizabeth Debicki will inherit the role when Season 5 premieres.

In a notably lackluster — and disappointingly non-diverse — field, Matthew Rhys seems most likely to triumph for his well-received star turn in HBO’s period drama Perry Mason. The actor previously missed out on a statue for his stellar work on The Americans, so consider this a make-up prize.

Schitt’s Creek so completely dominated the Emmys, you might think there aren’t any awards left for Dan and Eugene Levy’s beloved comedy to win. Think again. The show’s final season could easily repeat its Emmy night triumph by sweeping the Musical or Comedy categories at the Globes, starting with the top prize. But if there’s a spoiler in the mix, it could be Apple TV+’s Ted Lasso, which is quickly become the buzz-generating powerhouse that Schitt’s Creek used to be.

Moira Rose likely won’t be denied, but if anyone can defeat the mighty Catherine O’Hara it would likely be first-time nominee Kaley Cuoco. As the star and executive producer of the HBO Max hit The Flight Attendant, the actress is building on her Big Bang Theory success and a victory at the Globes would be the big bang that propels her into the next phase of her career.

It’s another match-up between Schitt’s Creek and Ted Lasso as Eugene Levy and Jason Sudeikis square off for the Best Actor trophy. This could be an easy way for the HFPA to split the vote, giving the prize to Sudeikis’s likable football coach, while the Rose family celebrates their multiple other wins. But we’re still thinking that Ted Lasso is Schitt’s out of luck this time around.

It’s hard to imagine a scenario where Netflix’s blockbuster chess drama, The Queen’s Gambit, hasn’t checkmated the competition. That said, the ecstatically reviewed Unorthodox could prove to be the spoiler with its more contemporary story of a woman looking for her place in the world.

Best Actress in a Limited Series

Anya Taylor-Joy officially went from rising star to superstar courtesy of The Queen’s Gambit, and her intense star turn — she’s in virtually every frame of the show — seems unbeatable from our vantage point. Even with perennial favorites like Cate Blanchett and Nicole Kidman in the mix, Taylor-Joy is many moves ahead.

Best Actor in a Limited Series

From Paddington 2 to A Very English Scandal, Hugh Grant’s late-career penchant for breaking bad has awarded him some of his best reviews ever. The Undoing continues that trend and awarded him his sixth Globe nomination and, likely, his first win since Four Weddings and a Funeral kick-started his nice-guy phase. Breathing down Grant’s neck are Ethan Hawke, whose larger-than-life performance in The Good Lord Bird could bring the veteran actor his first Globe, and Mark Ruffalo for his turn as twins in I Know This Much Is True, which already earned him an Emmy.

The Schitt’s Creek love should extend to scene-stealer Annie Murphy, but there’s a very real chance that Gillian Anderson might pull focus for her equally funny performance as Margaret Thatcher in The Crown. If that happens, expect plenty to hear plenty of “ewwws” from the Alexis-loving fans at home.

In a category otherwise filled with dramatic performances, look for Schitt’s Creek funnyman Daniel Levy to join his dad in the winners circle. We love that journey for them.

The Golden Globes are set to take place on Feb. 28.