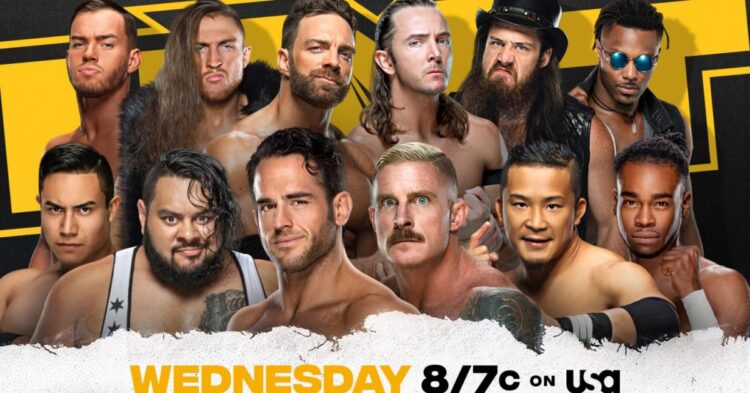 After a not too long and not too bloody battle, NXT has waved the white flag and has conceded the “Wednesday Night Wars” to upstart rival wrestling company AEW with their announcement this week that starting on April 13, NXT will be moving to Tuesday nights on the USA Network.  Now with that in mind, NXT will indeed be going out with a bang on its final two Wednesday night shows, starting tonight with the final episode before NXT Takeover: Stand & Deliver, the two-night event whose first night will air on the USA Network next Wednesday at 8 pm for NXT’s final Wednesday night broadcast.  So what do they have in store for us tonight?  Let’s take a look!

So obviously the big match tonight is the 12-man Battle Royal to determine who will be participating in the Gauntlet Eliminator match on night one of Stand & Deliver to determine the number one contender to face Johnny Gargano for the NXT North American title on night two.  Let’s see what WWE has to say about the match:

It’s a long and grueling journey to an NXT North American Title opportunity, and it begins this Wednesday in a Battle Royal clash.

Who will emerge from the brutal Battle Royal and move one step closer to gold?

In addition to the Battle Royal tonight, we’ll also see Kayden Carter & Kacy Catanzaro vs Tian Sha, Roderick Strong vs Cameron Grimes, more build-up to Karrion Kross vs Finn Balor for the NXT title at Stand & Deliver, and maybe even some more from Kyle O’Reilly and Adam Cole ahead of their unsanctioned match at Stand & Deliver.

To see all this action, tune in to the USA Network tonight at 8 pm.