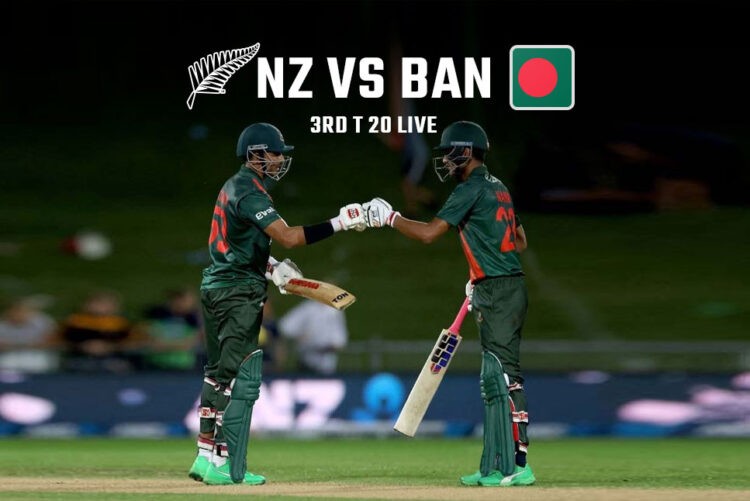 With overs reduced to 10-overs-a-side, it was a difficult task for any side but Martin Guptill and Finn Allen made it look easy. Within sixth over NZ raced to 85 before Guptill departed. But Allen, who did not have a great debut match, scoring a golden duck was at his best. His 29-ball 71 made the difference as New Zealand posted 141/4 in 20 overs, leaving Bangladesh a mountain to climb.

In contrast, Bangladesh were off to a poor start as they lost Soumya Sarkar and Liton Das back to back in the first over off Tim Southee.

Umpires having a chat in the middle as the big covers come off at Eden Park. No update on toss or start time. #NZvBAN pic.twitter.com/2UgxaEkv4n

NZ vs BAN 3rd T20: An all-around performance from New Zealand neutralised the effect of Soumya Sarkar’s fighting half-century and helped the Kiwis register a 28-run win over Bangladesh in the second T20I on Tuesday and seal the series 2-0. Can Bangladesh win the final fixture, if not-

Bangladesh: Taskin Ahmed was expensive on his return and Bangladesh have the option to field Rubel Hossain or Al-Amin Hossain or go back to Mustafizur Rahman. Mahmudullah has a strain and could miss the last T20, while Mushfiqur will be giving a fitness test ahead of the game to determine his availability.