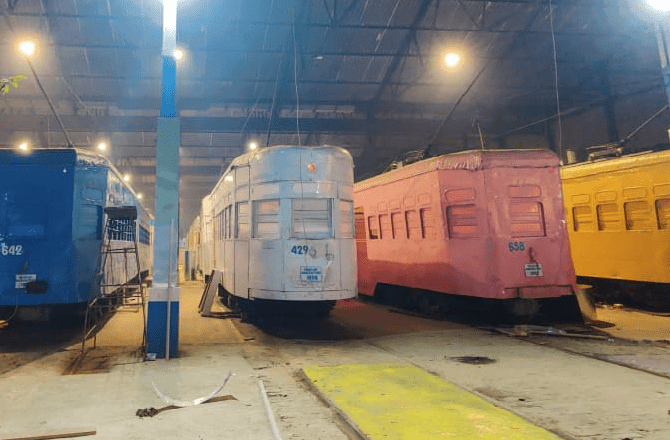 Kolkata has the only operational tramway of India. The Calcutta Tramway Company was formed and registered in London on 22 December 1880. This December marks 140 years of the CTC. On the 140th anniversary of CTC, the city of joy is getting a perfect gift.

The TWK has been conceptualised by West Bengal Transport Corporation that runs the Kolkata tramways. “The Tram World Kolkata will be a unique gift for tram lovers,” said Rachhpal Singh, Chairman WBTC.

“The idea behind Tram World Kolkata is two folds. Old trams, that would have been forgotten, have been transformed into a new life. Also, people can visit the TWK and immerse into art, tram love, music etc. The idea is to attract youth to Kolkata’s culture”, said Rajanvir Singh Kapur, MD WBTC. The TWK is being positioned not as a museum but a place where all can visit to get into tram nostalgia and also to have a good time. “The TWK would not be a museum. It is much more. It is a place where one can come and spend some quality time. There would be art, music, food, a place for adda and tram love” said Rajanvir Singh Kapur, MD WBTC.

The Tram World converts old trams that would have headed to scrapyard, into a permanent area where tram lovers and connoisseurs can visit and spend some quality time. The TWK has taken up old tram bogeys, as old as built in 1938, and they have been made into zones of art, music, photos, museum, food etc.

Swarnakamal Saha, Vice Chairman WBTC said, “WBTC is taking up new initiatives to serve the people and also preserve the culture of the city”.

The TWK will also have a special section for vintage cars. The vintage cars have been curated by Classic Drivers Club, Kolkata.

“For years, the Kolkata tramways have been the flag bearer of sustainable public transportation in the country. The Kolkata Tram World (KTW) will showcase the cultural heritage of tramways from across the globe to create awareness about their role in providing affordable and clean public mobility in today’s world and the importance of preserving their legacy “said Dr. Ajay Mathur, Director General TERI.

“On behalf of Techno India Group & Ecole Intuit Lab, we are thankful to the Government of West Bengal, and the WBTC team of Tram World Kolkata for giving us the opportunity to be a part of the massive Kolkata Tram Project. This one of a kind initiative celebrates the history of Bengal Tram and furnishes the scope to assist in the financing of the preservation of old trams” said Meghdut RoyChowdhury, head of Kolkata Ecole de inuit Lab.

WATTRAIN (The World Alliance of Tourist Trams and Trains), since being founded in 2010, has been at the forefront in promoting the interests of the owners and operators of tourist trams and trains worldwide. “Kolkata Tram World is a modern approach for the 21st Century to display the engineering of the 19th Century which hopefully will attract the youth of today. It will also bring to people’s attention how eco-friendly trams are and certainly the way to go for the transport of the future. This will also serve as a fantastic resource for visitors to Kolkata, showing how the tram has developed over time, and then sadly diminished, only to be re-born as the 21st Century’s mode of travel, in line with most major cities in the world.” said Andrew Gill, Director, WATTRAIN Ltd

“As an expert on Industrial heritage having authored all Industrial World Heritage Sites of India beginning with the Darjeeling Himalayan railway (DHR); I’m proud that at last the creation of a Tram World in Kolkata is opening to cherish the great living legacy of Kolkata; coinciding with 140 years of coming of CTC. Gradually, this should evolve with associated Tramcars, Machines, Heritage-routes, Archives, Artefacts, Arts, Culture, Folklore etc. After all, Kolkata has amongst the most remarkable tangible and intangible heritage of trams” said Rajesh Agarwal, former member of Railway Board and UNESCO full-time industrial heritage expert.

“Indian cities are in an utmost need of augmentation of public transport systems. With continued pressure to reduce congestion, tackle air quality in cities and reduce greenhouse gas emission contributing to climate change, Tramways are clean, silent and space-efficient systems that drive the economic progress of our cities sustainably. UITP India works towards advancing public transportation in the country through advocacy, research & networking and wishes success and growth to Kolkata Tramways World (KTW) in advancing public transportation,” a message from UITP-INDIA stated.

“I am so happy there is the new Tram World Kolkata(TWK). Thanks to West Bengal Transport Corporation to be willing and able to teach and show the importance to keep the trams running on Kolkata‘s streets. To know the past is important to know how to model the future for an eco-friendly transport system. Keep the Kolkata trams running, make them shine! Trams are the future! The tracks are there, the trams are there, the depots are there, the great workshop Nonapukur is there – plenty of opportunities for the current management together with the city to move ahead in a new direction. I can’t wait to re-visit Kolkata to experience Kolkata Tram World myself & wish for great success,” Lars F. Richter, Verband Deutscher Verkehrs-Amateure e.V. www.vdva.de

“The concept of creating a Tram World as a place to learn about trams and like systems all over the world through exhibits, books, talks, videos and models would be a great addition to the City.”Asit N Sengupta, entrepreneur, life member of American institute of Certified Planners

Traveling by tram in Kolkata was part of my life for many decades, and an experience my family and I always enjoyed. I am delighted to hear of the Kolkata Tram World project, that is a unique initiative and wonderfully creative. I look forward to discovering the city again through the world of trams, Dr. Shanti Pappu, Sharma Centre for Heritage Education, India

I am so happy there is the new Tram World (TWK). Thanks to West Bengal Transport Corporation to be willing and able to teach and show the importance to keep the trams running on Kolkata‘s streets. To know the past is important to know how to model the future for an eco-friendly transport system. Keep the Kolkata trams running, make them shine ! Falko E. Ritter, Berlin, tram enthusiast since childhood, working for the Berlin Transport Authority (BVG).

In a country where history and heritage are not given the importance they should get, it is refreshing to see that an initiative, Kolkata Tram World, is being set up to combine art, history and heritage with the objective of attracting youth to this very eco-friendly form of transportation – the tram. As lovers of any form of transportation that moves on rails, the Rail Enthusiasts’ Society would like to congratulate the Kolkata Tram World and wishes it all the best for succeeding in their venture. It is initiatives like these that will inculcate an appreciation for our heritage and also encourage the public to travel by trams. Credit should also go to the West Bengal Transport Corporation, Kolkata, for encouraging such a venture, J L Singh, secretary, the Rail Enthusiasts’ Society

“It’s good to see a dead place has been given a new life to it wish all the support and best wishes to Tram World Kolkata,” said Dr Smarajit Roy | Director, SolarWin UK Ltd.

“I wish Tram World, a unique initiative by Kolkata (Calcutta) Tramways to inventorize trams of the world all the success. Revival of the tramway would I believe bring back to the city of Kolkata this source of unique charm and character. I hope the TWK project in particular helps young minds immerse themselves in the forgotten glory of the Kolkata tram. Best of luck,” Rashi Grover, Consultant World Bank’s transport unit in New Delhi.

The Tram World Kolkata will start for public from 23rd of December. The winter timings will be from 10 am to 6pm. The ticket will be Rs 30 for entry to the TWK. People can book the TWK Lawns for parties, book fairs, and open air events.