On 4th anniversary of Force 2, Sonakshi Sinha says ‘proud to be part of film’ 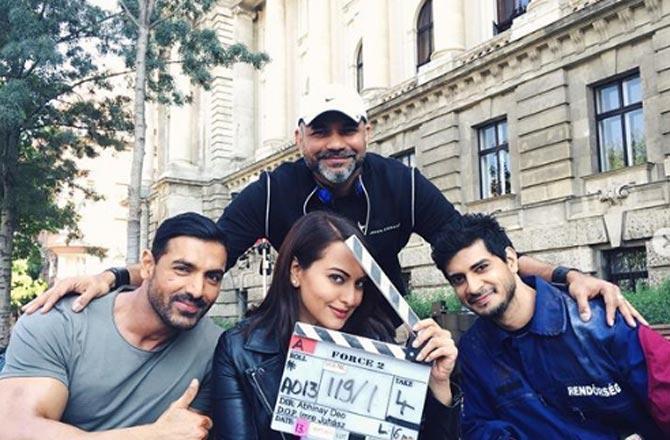 By sharing some behind the scenes pictures from the ‘Force 2’, actor Sonakshi Sinha on Wednesday took a walk down the memory lane and celebrated four years of John Abraham co-starrer action-thriller flick.

The ‘Dabangg’ star shared some throwback pictures with the cast and crew members of the film and refreshed her memories associated with it. In the post, the first snap is a clap shot in which Sonakshi is seen holding the clap, while co-stars John, Tahir Raj Bhasin and producer Vipul Amrutlal Shah smilingly pose for the lens, in an outdoor location. The second one shows Sonakshi seated on the roof of a car while John and Tahir also are seen sitting alongside her.

The ‘Rowdy Rathore’ star chronicled the experience of shooting the film, on the occasion of its fourth anniversary and noted, “Been 4 years since this amazing film that I am so proud to be a part of! Definitely, one of the best working experiences for me, Plus KK was quite badass so win win!”

Celebrity followers including Huma Qureshi and more than 32 thousand fans liked the post within 34 minutes of being posted.