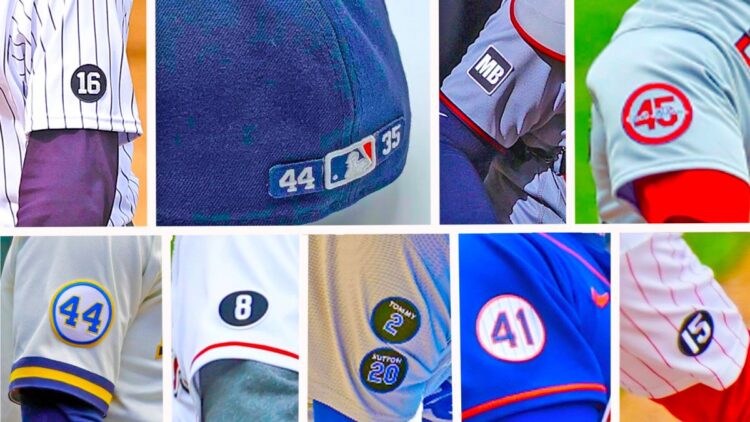 After getting the coronavirus vaccine on Wednesday, I was pretty out of it on Thursday, which meant that Opening Day was a different experience than usual. I woke up in the morning, had breakfast and walked the dog, then went right back to sleep, setting an alarm to be able to watch the first inning of the season before going back to bed again.

Upon turning to pregame introductions for the Yankees and Blue Jays, I immediately noted the No. 16 patch on the Bronx Bombers’ sleeves to honor the late Whitey Ford. His death feels like a long time ago, because October feels so distant from now. But indeed, he died the day before the Yankees’ final playoff game last year, so having the memorial for this full season makes sense after having only done so for one game last year.

After getting more sleep, I checked back in with baseball and saw a couple of walk-offs — the Brewers walked off the Twins, and there on Milwaukee’s arms were patches with the number 44, in honor of Hank Aaron. The Twins, too, had memorial patches on their sleeves, for their late bench coach, Mike Bell.

Over to the Phillies, walking off Atlanta, and there was another departed player to remember: Dick Allen, honored with a No. 15 on Philadelphia’s sleeves. Atlanta, meanwhile, has its memorial to Aaron on its caps, as well as a No. 35 for Phil Niekro.

I flipped over to Dodgers-Rockies, and there on the defending world champions’ sleeves were two patches, a No. 2 for Tommy Lasorda and a No. 20 for Don Sutton. And in the Cardinals-Reds game, both teams had sleeve adornments, St. Louis had one for Bob Gibson and Cincinnati for Joe Morgan.

Meanwhile, the Mets didn’t play on Thursday because the Nationals had a COVID issue, so there was no sighting of New York’s patch for Tom Seaver, which they wore for the balance of last season after The Franchise’s death, but rightly decided to carry over into this year.

Just looking at the sleeves around the majors is a stark reminder of how much tragedy there’s been in the last year, how much death has been all around us, and how much, even as we start to turn a corner back into normal life, we’ve all lost.

The players being memorialized aren’t the only ones baseball has lost recently. Grant Jackson pitched in the majors for the better part of two decades, as did Rheal Cormier. Stan Williams pitched 14 years in the Bigs, and was a pitching coach for years after his career. Dr. Bobby Brown won four World Series with the Yankees and was later president of the American League.

Since the start of November, according to Baseball Reference, there have been 59 former major leaguers who have died — 38 in the first three months of this year. The last time we lost more than 100 former major leaguers in a year was 2011. To be on a pace for more than 150 this year is devastating, and likely means, unfortunately, that there are more patches yet to be added to MLB jerseys this year.

One thing that could be added, not for a specific player, is a memorial to the more than 500,000 Americans we’ve lost in this pandemic. If American flags could be added in 1990 for what, at that point, wasn’t even a war in the Persian Gulf, and Red Cross stickers added to helmets after Hurricane Katrina, why should this season be played without an acknowledgement of America having lost nearly the population of the state of Wyoming, or a tribute to all those people who have worked so hard to save lives, including the monumental vaccination drive happening right now?

We’ve lost so much, and so many people, and as widespread as baseball’s tributes already are, what’s really striking is that there’s so much more that can be done.