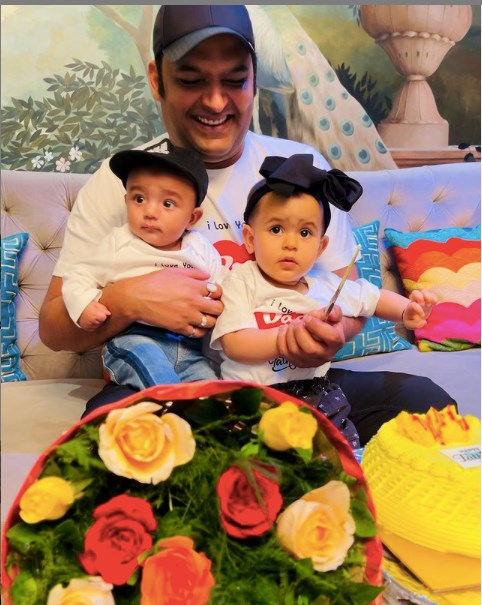 Fans were super excited to see our celebs celebrating Father’s day yesterday. The whole of social media was flooded with the photos of the fathers and the kids but what caught the most attention was Kapil Sharma sharing the photo of his son Trishaan for the first time. He shared a picture of him with both his kids on the occasion of Father’s day.

As soon as Kapil shared this pic, it became viral all over the net. Fans were super excited to see Trishaan for the first time. Everyone had seen Anayra before but Trishaan’s first photo came as a big surprise yesterday.

In the photo, we can see Kapil celebrating the fathers day with his kids. Both of them can be seen sitting on Kapil’s lap while he is cutting the cake. Three of them have worn ‘I love You Dad’ T shirt. Kapil’s munchkins look cute as a button here.

The comedian actor married Ginni Chatrarth in December 2018. There were blessed with their daughter Anayra in December 2019 and Trishaan, their son in February 2021.

On the workfront, Kapil was on a paternity break ever since Trishaan was born as he wanted to be with his wife and kids. He and his team are soon going to be back with a new season of their famous show ‘The Kapil Sharma Show’ on Sony Entertainment Television.