Home General On the rebellious joy of a long, long movie dance scene

On the rebellious joy of a long, long movie dance scene 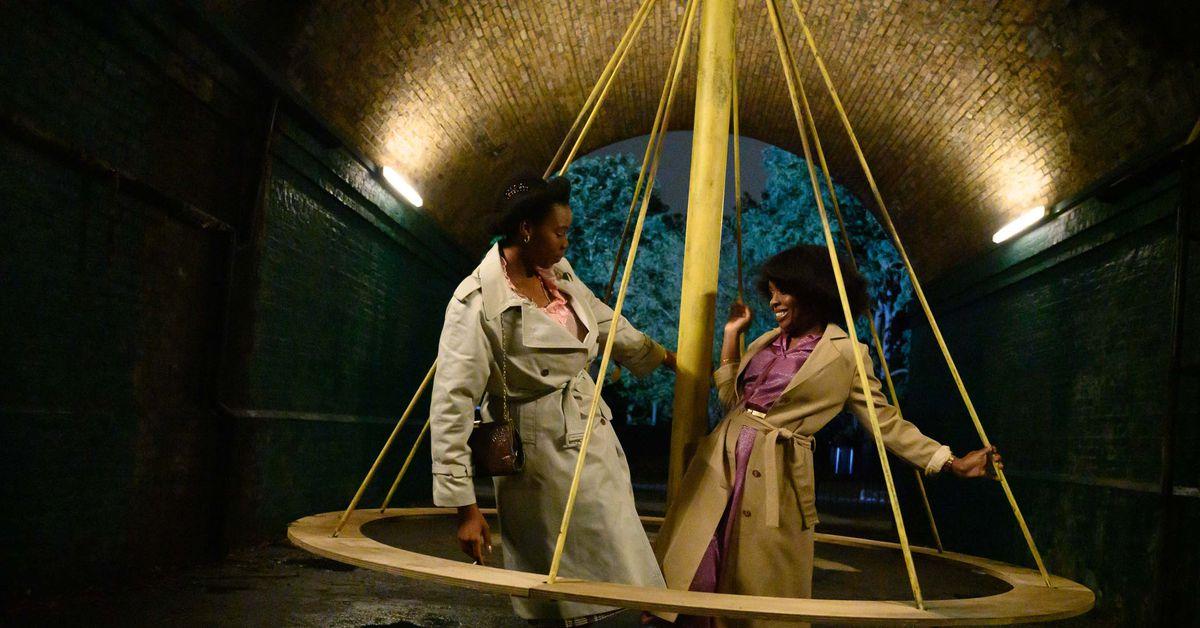 A bead of sweat, shot close up and glistening, slowly meanders down a gilded wall. The music playing in the background is equally unhurried. It’s lovers rock, reggae with a romantic pulse, and the room is full of young people who’ve come to dance all night. And they’re in a movie: Steve McQueen’s Lovers Rock, which debuts November 27 on Amazon Prime, the second of five installments in McQueen’s masterful anthology series about West Indian communities in London.

Lovers Rock lasts 70 minutes, but it feels like it lasts all night, in a good way. Time slows down in a movie like this. While it’s ostensibly a story about a young woman named Martha (Amarah-Jae St. Aubyn), who meets Franklyn (Micheal Ward) at a house party in the early 1980s, it’s more of an experience than a film, more immersive than narrative.

Most of what’s subversive about Lovers Rock never makes it to the foreground, but the title shows McQueen’s hand. The film’s young dancers and prowlers and lovers are at a house, not a club, because the all-white nightclubs of the era aren’t friendly to them. The musical genre from which the movie draws its name emerged in the 1970s as a departure from other reggae, in that it foregrounded women’s desire, women’s experience, women’s passion. It bucked the patriarchal attitudes that often undergirded the music scene, and in centering romance, it became subtly political. Artists from Lauryn Hill to Drake to Rihanna have worked within the structures and styles of lovers rock.

Lovers Rock translates these attitudes and themes into vibes, letting Martha escape a strict religious family and cut loose for a while. It’s not a world free of care; at one point, Martha intervenes when she discovers a man trying to assault a young woman he lured out of the party. She argues with Franklyn; she has a tiff with her best friend, Patty (Shaniqua Okwok). It is not paradise in this house.

But it is an oasis. The greatest scene comes midway through, when the DJ puts on Janet Kay’s hit 1979 single “Silly Games,” one of the most famous lovers rock songs. Lovers Rock is set a few years after the song hit its peak, and the whole crowd knows it word for word. The song is five minutes long and plays in its entirety, Kay’s voice climbing slowly up the scale till she hits a high note at the end. McQueen lets the whole thing roll. The dancers groove and grind; it looks like they’re dancing in slow motion. And when the song is over, the crowd starts to sing it again, from the beginning, a cappella, still dancing.

The whole scene lasts 10 minutes, and it’s only one of several long sequences in Lovers Rock. It dares the stolid movie-watcher, perched on their couch, to let go of the fourth wall and get up and dance.

That’s the power of a movie: to speed up time or slow it down, or to run it at the same speed as our own time, daring us to sync up. There’s something a bit flustering about watching a film like that. We are so used to leaning on the barrier, the fiction that we set up between ourselves and whatever’s happening on screen — sitting back and quietly judging it, munching on popcorn.

But something about an extended dance scene coaxes us out of that bubble. Jonathan Demme — one of the greatest directors of all time, who is celebrated in particular for his concert films — harnessed that power and let it rip in the third act of 2008’s Rachel Getting Married, a movie about a young woman named Kym (played by Anne Hathaway) having a breakdown at her sister’s wedding. Her sister Rachel (Rosemarie Dewitt) is marrying record producer Sidney, who is played by TV on the Radio frontman Tunde Adebimpe. Their wedding is full of musicians, and music breaks out after the ceremony, and everyone starts dancing. Demme asked the musicians to improvise the music on set, following their mood rather than a preset composition, and the result is vibrant and irresistible.

The dancing comes near the end of a movie full of bitterness and family strife, so its joy is shaded and colored by all the sorrow — and that might be what makes it so meaningful. Everything is hard, and people often hurt each other, and hurt themselves. But there is something we have always done, as a species, to fight back. And on screen, the characters invite us to join in both their pain and their elation.

Whenever this sort of extended dance scene shows up in a film — with diegetic music that sets the characters swaying and asks us to listen to the full song with them — the result is intoxicating. In 2020, such scenes have popped up quite a bit, whether it’s Kate Lyn Sheil in She Dies Tomorrow as despondent Amy, listening to a requiem over and over as she gets wasted in her house, or isolated dancers losing their minds alone across Europe in the short, brilliant Strasbourg 1518. The upcoming film Another Round, starring Mads Mikkelsen, features several exhilarating dancing sequences where middle-aged men sway and jump and swirl, losing themselves and their pain and their adult bitterness in the music. In the third episode of Damien Chazelle’s Netflix series The Eddy, which debuted back in May, a Parisian funeral crammed with jazz musicians turns from somber to electrifying; the episode stretches from storytelling to full-out memorial celebration.

In all of these cases, the normal rhythm of cinema — which cuts and moves from scene to scene, cramming days and weeks and years into a few hours — expands to match the pace of our own off-screen time. And it can be unnerving. If making a movie lets the director manipulate time and reality, it also allows them to suddenly make us feel our place in time. And there’s no better way to do that than through a long, languid stretch of music and dance that we can hang out in ourselves.

Lovers Rock is easily one of the best movies of 2020, and by the end of the film, you’ll be surprised that only 70 minutes have passed; somehow, it’s felt like much more, but in the very best way. This year has bent us all toward isolation and bitterness, toward an unending monotony somehow mixed with a daily parade of horrors. There have been far fewer opportunities to lose ourselves in music, to sweat and breathe alongside other bodies, and know that we are alive.

So sometimes it helps to sink deeply into the images and rhythms and pace of a film that knows one big truth: All of eternity, the joy and the pain, can be compressed — a glittering bead of sweat and bliss — into one perfect dance party.