Home TechnologyAndroid OnePlus 9 Pro vs Xiaomi Mi 11: Which should you buy?

OnePlus 9 Pro vs Xiaomi Mi 11: Which should you buy? 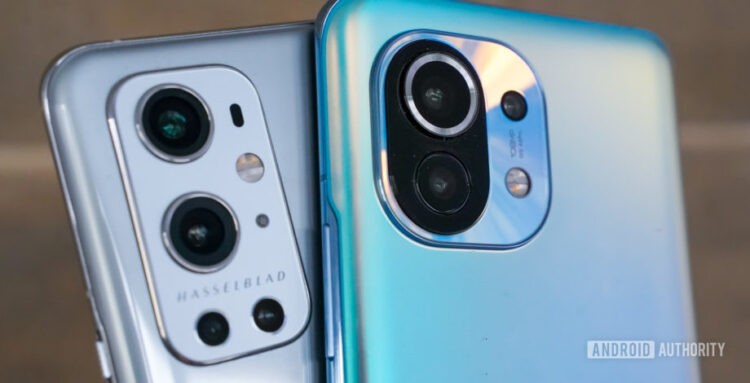 OnePlus has finally pushed itself into the same competitive space as today’s top phones. Rather than stand as a flagship killer, the OnePlus 9 Pro aims to be a killer flagship. That means it not only has to go head-to-head with the best but it also has to contend with affordable flagships looking to snatch its former position. Chief among those contenders is the Xiaomi Mi 11. In this mano a mano, we look at the OnePlus 9 Pro vs Xiaomi Mi 11 to see which phone comes out on top. OnePlus and Xiaomi designers were likely chasing the same basic concept when they sketched the initial shapes of the OnePlus 9 Pro and the Xiaomi Mi 11: simplicity. Both of these phones dial back the glitz in favor of a straightforward approach. The OnePlus 9 Pro and Mi 11 are both elegant pieces of hardware that keep the extravagant flourishes in check and instead deliver refined good looks.

The OnePlus 9 Pro and Xiaomi Mi 11 designs are freakishly similar.

You’ll find metal and glass sandwiches here. The OnePlus 9 Pro goes for curved Gorilla Glass 5 and aluminum, while the Mi 11 mixes in the newer and stronger Gorilla Glass Victus on both the front and back. OnePlus hasn’t said why it shied away from the high-end option. Each has an appealing mirrored finish that evokes emotion. Where the OnePlus 9 Pro blends from black to white, the Mi 11 changes from silver to blue. The phones are nearly identical in size, shape, and weight, which means usability is about the same. OnePlus’ dedicated alert slider helps the OnePlus 9 Pro notch a win over the Mi 11, but it’s a minor victory. The bottom edges of the phones are so similar it’s freaky: SIM card tray, USB-C port, downward-firing speaker. Xiaomi’s phone holds a small edge over OnePlus’ here, as the Mi 11 supports two SIM cards and the OnePlus 9 Pro supports only one.

Each device has a distinctive camera module on the rear. OnePlus’ has a softer analog look to it that is direct and non-offensive. Xiaomi’s is a bit more in your face with multi-tiered ledges and a mix of silver and black accents. There’s no question the camera modules stand out. I prefer OnePlus’ approach here.

See also: OnePlus 9 vs older OnePlus phones — should you upgrade?

One thing the OnePlus objectively has in its favor is an IP68 rating. It is protected against dust and water. The Mi 11 is not. Shame.

What about those screens? Shared attributes include AMOLED technology, variable 120Hz refresh rates, high pixel densities, 20:9 aspect ratios, and HDR10+. The OnePlus 9 Pro has a unique 6.7-inch screen thanks to its LTPO tech, which helps it run more efficiently. The Mi 11 has a 6.81-inch screen that’s a bit more pixel-rich. As far as the eye can tell, the screens are nearly equivalent. You can’t go wrong with either. Some core features for both phones include top processors with generous allotments of RAM and storage, large batteries with rapid charging speeds, multi-lens cameras with high-pixel-count sensors, and heavy-handed user interface skins.

Also read: OnePlus 9 vs Samsung Galaxy S21 — which should you buy?

First, let’s weigh the engines driving these ships. Both rely on the top-performing Qualcomm Snapdragon 888 with the Adreno 660 GPU. The OnePlus 9 Pro comes in two basic configurations: 8GB RAM with 128GB of storage, or 12GB RAM with 256GB of storage. Either way, you’re getting a solid setup. The Mi 11 is slightly more restricted. It offers just 8GB of RAM, but comes with the same 128GB and 256GB storage options. Remember, neither phone supports microSD cards. Second, let’s dive into the power sources for these handsets. OnePlus went all out in some respects. First, the battery rates 4,500mAh, which is typical for a 2021 flagship. We found the battery lasted a day in the stock configuration (dynamic refresh rate, FHD resolution), but it was on its last legs come bedtime. When used heavily, the battery could give out before the end of the day. That’s not great news.

OnePlus clearly hopes its rapid charging tech makes up the difference. The OnePlus Pro 9 supports some of the fastest charging we’ve seen. For example, it ships with a 65W charger and can go from 0% to 100% in less than half an hour. Wireless charging, at 50W with the optional Warp Stand, is almost as fast. Bummer that it’s not as fast with third-party chargers. If you switch the phone from the stock 120Hz mode to the less-power-hungry 60Hz mode, you’ll get more battery life.

Bottom line here: battery life is on par between the two.

Xiaomi sort of took the opposite approach. The 4,600mAh battery itself is large enough to push the phone through an entire day with room to spare. During our testing, it was rare the battery dipped below 50% after a full day’s use. This was despite running demanding benchmarks, using the camera, and playing games. These results were with the display set to Full HD+ and the refresh rate set to 60Hz (which is how it’s set out of the box). If you up the refresh rate to the optional 120Hz the battery life drops significantly, though it still makes it through a day.

The device charges rapidly too. It supports 55W wired charging and 50W wireless charging. Xiaomi includes a 55W GaN charger in the box. The phone charged from 0% to 100% in 47 minutes. That’s longer than the OnePlus 9 Pro, true, but still impressive. The bottom line here: battery life is on par between the two. Third, cameras. OnePlus designed its most advanced camera system ever in cooperation with German camera maker Hasselblad. The camera features a 48MP main lens, a 50MP ultra-wide lens, an 8MP telephoto lens, a 2MP monochrome depth camera, and a 16MP selfie camera. With the ability to shoot 8K video, it would seem every modern feature is presented and accounted for.

The main and ultra-wide lenses garnered the most attention from OnePlus and Hasselblad and are where you’ll see the best performance. We’re not talking quite at the level of the Pixel 5 or the Galaxy S21, but it’s not far off. The ultra-wide was tuned to help eliminate distortion, and the telephoto can reach 3.3x optically and 30x via digital cropping. In short, the cameras on the 9 Pro are solid, if not spectacular.

We have to give the OnePlus 9 Pro the edge when it comes to the cameras.

Xiaomi didn’t do as good a job as OnePlus with its own camera suite. For starters, it has a 108MP main camera, a 12MP ultra-wide camera, a 5MP telemacro camera, and a 20MP selfie camera. The main sensor does a respectable job, but the secondary cameras aren’t quite up to snuff. The telemacro is the biggest disappointment. It does neither telephoto nor macro photography very well. At least video performance is solid. In the end, we have to give the OnePlus camera the edge here.

Last, software. Both phones are running Android 11. OnePlus’ OxygenOS 11.2 user interface skin is superior to Xiaomi’s MIUI 12, there’s just no comparison. While there’s nothing wrong with MIUI 12, OxygenOS 11.2 is more polished, user-friendly, and useful day in and day out.

OnePlus has delivered its most expensive phone ever in the 9 Pro. At $969 for the 8GB/128GB version and $1,069 for the 12GB/256GB model, you’re looking at Galaxy S21 prices. Good thing OnePlus upped its game and crafted a piece of hardware that lives up to its high price.

Related: The best OnePlus 9 alternatives — 7 phones to check out before you buy

The Xiaomi is a bit more affordable at approximately $889. Given the weaker performance of the Xiaomi Mi 11 camera, the price differential is warranted and makes sense from a value perspective. Both phones are priced more or less right.

The OnePlus 9 Pro is easily the better option in India considering the minuscule price delta. However, in the UK the Xiaomi Mi 11 is only marginally more expensive than the vanilla OnePlus 9.

OnePlus 9 Pro vs Xiaomi Mi 11: Which should you buy? OnePlus wins out on the more useful camera arrangement, the vital IP68 rating, the luscious and bright display, and the cleaner software. Xiaomi came across as more impressive with hardware personality, durability thanks to Gorilla Glass Victus, and dual-SIM support.

The general experience from both is quite good, but the OnePlus 9 Pro is a slightly better all-around package.

While the OnePlus 9 Pro is shooting for a slightly higher market than the Mi 11, it’s worth noting that the latter is still Xiaomi’s closest rival as the Xiaomi Mi 11 Pro is China-only and the Xiaomi Mi 11 Ultra is aiming even higher at the ultra-premium tier.

With that in mind, which of these two phones you choose boils down to preferences for these minor details. The general experience from both is quite good, but the OnePlus 9 Pro is a better all-around package. It’s more expensive, but it’s worth the extra cash compared to the Xiaomi Mi 11.