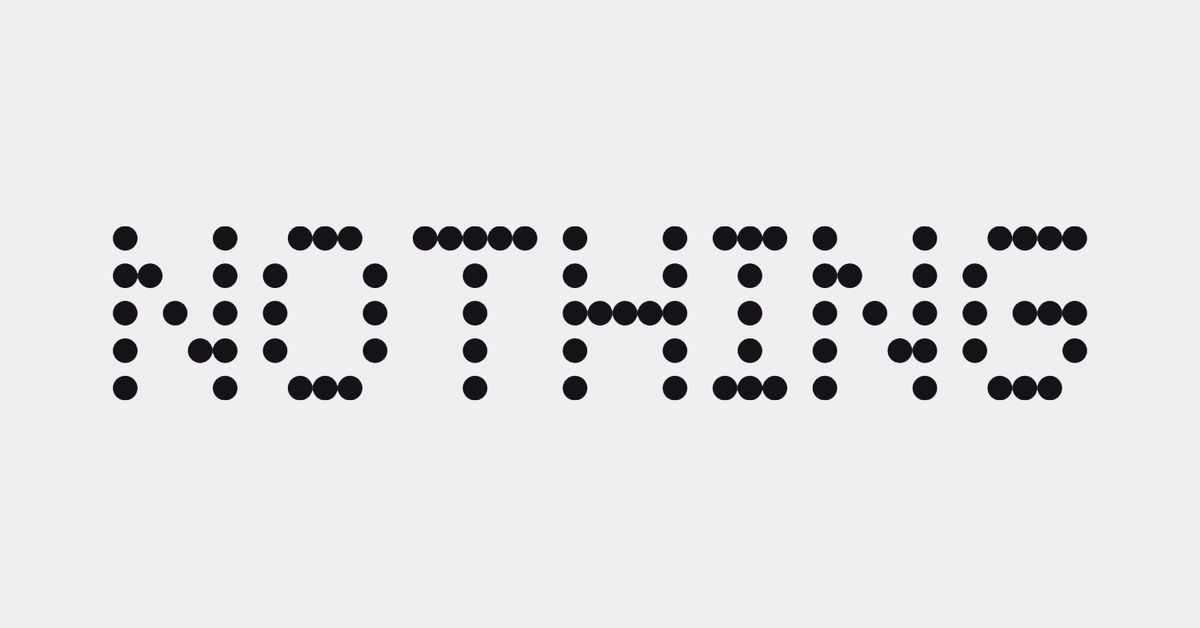 Carl Pei, the OnePlus co-founder who parted ways with the company last year, has announced the name of his next venture: Nothing. It describes itself as a “London based consumer technology company” and counts the likes of iPod inventor Tony Fadell, Twitch co-founder Kevin Lin, Reddit CEO Steve Huffman, and YouTuber Casey Neistat as investors. It plans to release its first “smart devices” in the first half of this year.

“Nothing’s mission is to remove barriers between people and technology to create a seamless digital future,” says Pei, Nothing’s founder and CEO, in a press release. “We believe that the best technology is beautiful, yet natural and intuitive to use. When sufficiently advanced, it should fade into the background and feel like nothing.”

What’s unclear at the moment is exactly what products Nothing plans to release. In an interview with The Verge ahead of today’s announcement, Pei declined to offer specific details on what form Nothing’s first “smart devices” will take. He also declined to say which companies Nothing plans to compete with.

Pei does confirm, however, that Nothing plans to release products across multiple categories, with the eventual aim of building up an ecosystem of devices.

“Right now… the team is being built, so we want to focus on simpler categories,” Pei says, “but as our team gains capabilities and skills we want to start moving up. The ultimate vision of having everything connected in a seamless way, that can only happen when you have multiple categories of products that are connected.”

During Pei’s tenure at OnePlus, the company released everything from smartphones to headphones and even TVs. Last year, Wired reported that Pei’s new company could focus on music and might include manufacturing headphones. When asked, Pei declined to confirm whether headphones would be among Nothing’s early products. When asked by Wired, he said the company’s plans were “so much more than that.”

While there’s been speculation that this could point toward Nothing developing an accompanying music service, Pei tells The Verge that Nothing plans to make most of its money by selling hardware rather than software subscriptions, at least initially. “We haven’t spent too much time thinking about the software portion of it,” Pei says. “It definitely needs to be a good user experience if you are to generate revenue from software.” In the long term, however, he admits that a “healthy business” requires both good hardware and good software.

Pei’s new company plans to differentiate itself by using “custom made” components in its products right from the start. Pei suggests this will stop Nothing’s products from looking too much like its competitors. “There’s a reason why a lot of products on the market look quite similar,” Pei observes. “It’s because they share a lot of the same components and the same building blocks.”

In contrast, OnePlus’ phones have faced frequent criticism over the years for the similarities they’ve shared with Oppo’s phones. In a recent video, Marques Brownlee outlined a series of Oppo and OnePlus devices with strikingly similar hardware, like the OnePlus 5 and Oppo R11, the OnePlus 6T and Oppo R17, and the OnePlus Nord N100 and Oppo A53. The two brands even use similar fast-charging technologies. OnePlus has Dash Charge, and Oppo has VOOC.

While OnePlus and Oppo are widely reported to exist under the same Chinese corporate giant BBK Electronics, Pei says Nothing is unencumbered by such an arrangement. “[Nothing is] a completely independent company owned by our founding team and our investors,” says Pei, with its own R&D department. And despite using contract manufacturers to build its devices, Pei says Nothing won’t just “relabel somebody else’s products.”

But while Pei hopes Nothing’s early products will feature “differentiated” designs without feeling “different for the sake of being different,” the eventual hope is for them to fade into the background.

Verge columnist Walt Mossberg referred this future state as ambient computing in 2017. Pei admits that it may take 20 or 30 years to arrive, but he says the future his company is aiming for is one where its technology resembles… well, nothing.

Back to Top
Close Add post
X
This massive, scorching exoplanet whips around its sun twice a day…Tech NewsAbout 280 light-years from Earth, a world of molten magma orbits one of the oldest stars in the galaxy. This exoplanet, 50% larger than the Earth, whi…

X
Why Microsoft’s self-driving car strategy is quietly brilliant…Tech NewsSelf-driving car startup Cruise has received more than $2 billion in a new round of investment from Microsoft, General Motors, Honda, and institutiona…
close