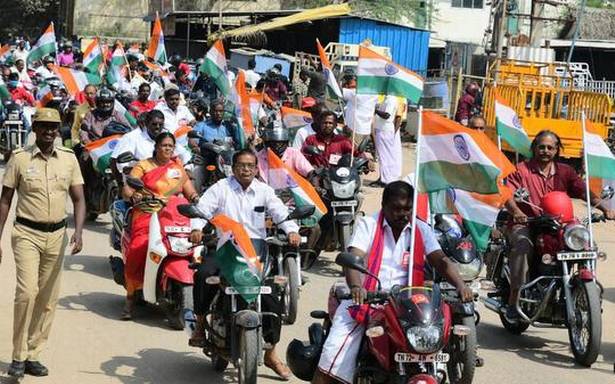 Cadre of DMK, Congress, Left parties, MDMK, VCK and others held the rallies in support of the farmers protesting in New Delhi, and to protest the fuel price hike

Cadre of Opposition parties took out a motorbike rally on Tuesday in support of farmers protesting in New Delhi and against the fuel price hike.

“The unprecedented fuel price hike, which has hit hard people from all walks of life, should be withdrawn. The Modi-led Union Government should consider the genuine demands of the protesting farmers. If not, the people’s protest will bring the government down,” Abdul Wahab, Tirunelveli City District Secretary of DMK said.

In Tenkasi, over 2,000 cadres from the Opposition parties participated in the bike rally from Ilaththur intersection to Tenkasi new bus stand. They raised slogans against the fuel price hike and pledged their support to the protesting farmers in New Delhi. “The farmers, who are fighting for their livelihood, will win the battle against the Centre,” they said.

Padmanabhapuram MLA S. Mano Thangaraj took out a cycle rally along with a few people from Manali near Thuckalay to Anna Stadium in Nagercoil where the Republic Day celebrations were held. “To express solidarity with the protesting farmers in New Delhi and to register my opposition against the unprecedented fuel price hike, we took out the cycle rally today,” said Mr. Thangaraj. He argued that the Modi-led government had robbed the people of over ₹20 lakh crore through inflated pricing of fuel ever since it came to power in 2014 while the United Progressive Alliance government was able to sell the petrol at ₹50 a litre even when the crude oil price in the international market stood at 150 USD per barrel.

“Even after unprecedented slump in the international oil price, the Modi-led BJP government is robbing the people,” Mr. Mano Thangaraj charged.

X
Mission Paani Waterthon: Akshay Kumar walks 21 km on treadmill to spotlight prob…IndiaKumar also talked about easy ways of saving water. He said, for example, that guests should be offered only half a glass of water and that they can as…
close