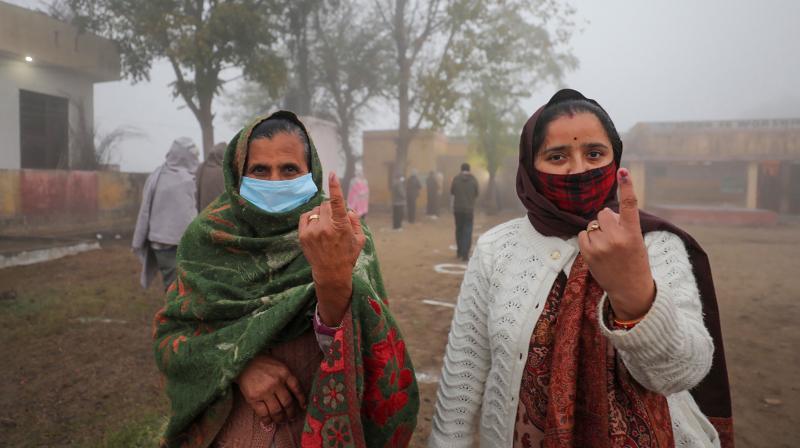 Srinagar: The authorities in Jammu and Kashmir heaved a sigh of relief rather are happy over the eight-phased polling for the Union Territory’s first-ever District Development Council (DDC) elections passing off peacefully.

Even as the vast majority of Kashmir Valley’s southern districts stayed away from the democratic exercise, the official statistics suggest that an overall sixty percent voting has been recorded in these elections. This, as per the officials, is “more than satisfactory”. On the other hand, the BJP has termed the voter response as an “endorsement” of the abrogation of Article 370.

The polling in the eighth and final phase of the elections was held on Saturday during which 50.98 percent votes were cast across 28 constituencies including 15 in Jammu region and remaining 13 in Kashmir Valley.

J&K’s State Election Commissioner (SEC), K. K Sharma, while addressing a press conference here said that the polling was peaceful at all 1,703 polling stations. He said that Jammu region recorded an average voter turnout of 72.71 percent with frontier Poonch district reporting the highest percentage of 83.58 followed by Reasi district with 81.92 and Rajouri with 77.31 percent.

The Kashmir Valley, however, recorded just 29.91 percent average voter turnout with Kupwara district highest 63.80 percent followed by Bandipora with 56.56 percent and Baramulla district 44.60 percent. Once again, majority of voters in south Kashmir districts chose to stay away from the democratic exercise. “The polling percentage recorded in Budgam was 35.12 percent, Anantnag 8.66 percent, Kulgam 11.20 percent, Pulwama 8.50 percent and Shopian 8.58 percent”, he said.

In quite contrast to it, the voting percentage in the other districts of Jammu region-Samba, Kathua, Ramban, Kishtwar, Udhampur, Doda and Jammu was between 60. 49 and 73.93 percent, he said.

Mr. Sharma asserted, “The elections were held in 280 DDC constituencies for the first time in J&K. Also went to polls are 1,088 Panchayat and 12,153 Panch constituencies. It is very promising to note that a very good participation of people was observed and enthusiasm among the people could be found on its peak keeping in view the fact that these elections are going to have a great impact on the developmental scenario in the rural community.” He added, “The people of J&K overwhelmingly participated in the election process thus reposing their faith in democracy and democratic process”.

A report from Poonch said that, at least, five persons were injured in a clash between supporters of two contesting candidates at a polling station in Salwah area of Mendhar on Saturday.