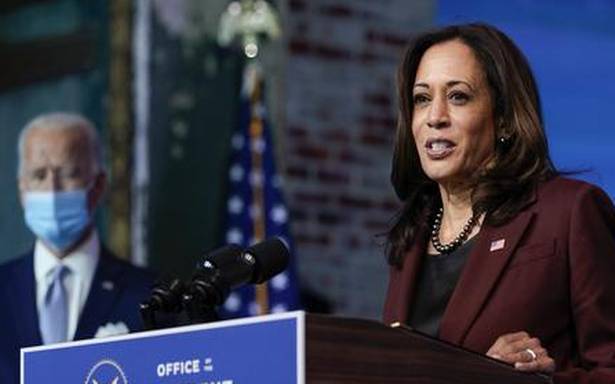 ‘Mr. Biden as the President will be focused on one thing: doing what’s best for the people of the USA’, she says

Acknowledging that they would inherit a series of unprecedented challenges upon walking into the White House, United States Vice President-elect Kamala Harris said overcoming domestic challenges is a necessary foundation for restoring and advancing American leadership around the world.

“President-elect Biden and I have long known that when we were elected, we would inherit a series of unprecedented challenges upon walking into the White House, “ Ms. Harris told reporters on Tuesday at the transition headquarters in Wilmington, Delaware where President-elect Joe Biden announced his national security team.

Addressing these challenges starts with getting this pandemic under control, opening our economy responsibly, and making sure it works for working people. And we also know that overcoming our challenges here at home is a necessary foundation for restoring and advancing our leadership around the world, she said.

“And we are ready for that work. We will need to reassemble and renew America’s alliances; rebuild and strengthen the national security and foreign policy institutions that keep us safe and advance our nation’s interests; and confront and combat the existential threat of climate change that endangers us all,” Ms. Harris said.

Asserting that she takes these issues very seriously, Ms. Harris said her whole career has been about keeping people safe, from serving as District Attorney to California’s Attorney General to the United States Senate, where she have served on the Intelligence and Homeland Security Committees.

“I have come to know firsthand the gravity of the challenges and threats facing the United States. And, over the past few months, I have also come to know the sound judgment, expertise, and character of the people on this stage. I can say with confidence that they are — to a person — the right women and men for these critical positions,” she said.

Mr. Biden as the President, she said, will be focused on one thing and one thing only: doing what’s best for the people of the United States of America. “When Joe asked me to be his running mate, he told me about his commitment to making sure we selected a cabinet that looks like America — that reflects the very best of our nation. That is what we have done, “she said.

Mr. Biden on Tuesday announced to nominate Anthony Blinken as his Secretary of State; Alejandro Mayorkas, Secretary of Homeland Security; Linda Thomas-Greenfield as US Ambassador to the United Nations, and Avril Haines, as Director of National Intelligence, who would be the first woman to be named for this top intelligence position.

The President-elect also announced the nomination of former Secretary of State John Kerry as Special Presidential Envoy for Climate, the first such official to sit on the national security council. Jake Sullivan has been appointed National Security Advisor and will be one of the youngest people to serve in that role in decades.